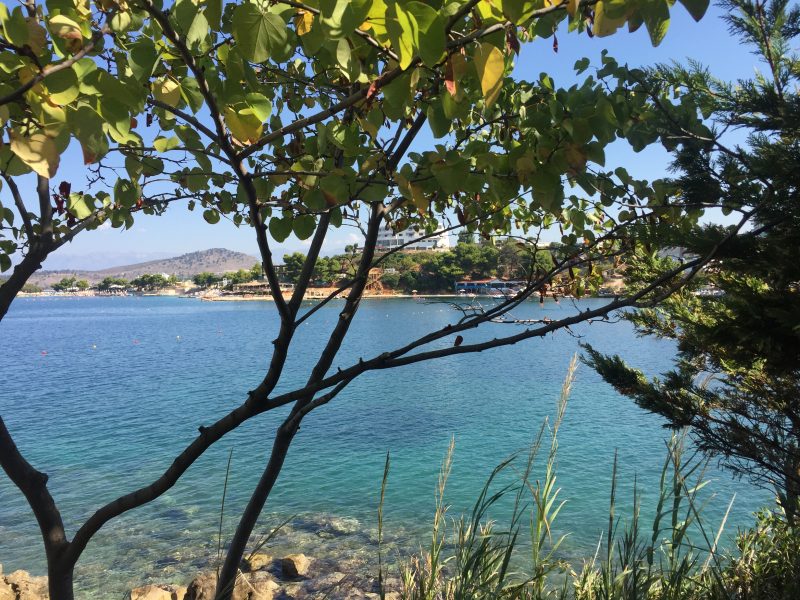 A beach in southern Albania. Photo by Ardi Pulaj, used with permission

Most years, reservations at the iconic Adriatik Hotel in the Albanian port city of Durrës are at a premium. But 2020, the year of the coronavirus pandemic, is not “most years”.

The hotel reopened its doors on May 18, as the country emerged from a lockdown that saw its beaches as well as its borders with neighbouring countries closed until the beginning of June.

Despite the relaxations, reservations are down 85%, according to general manager Nevila Dudaj.

“We had many reservations for the summer season 2020 from the fall of 2019 and they stopped during the first week of March,” she said.

“A few guests with valid reservations postponed their stay for the next year, but most of our guests asked for refunds, bringing financial difficulties to us,” said Dudaj, who also runs the U.S. based Adriatik Tours agency.

“The recovery of the tourism sector will take time one to two years at least,” Dudaj predicted grimly. 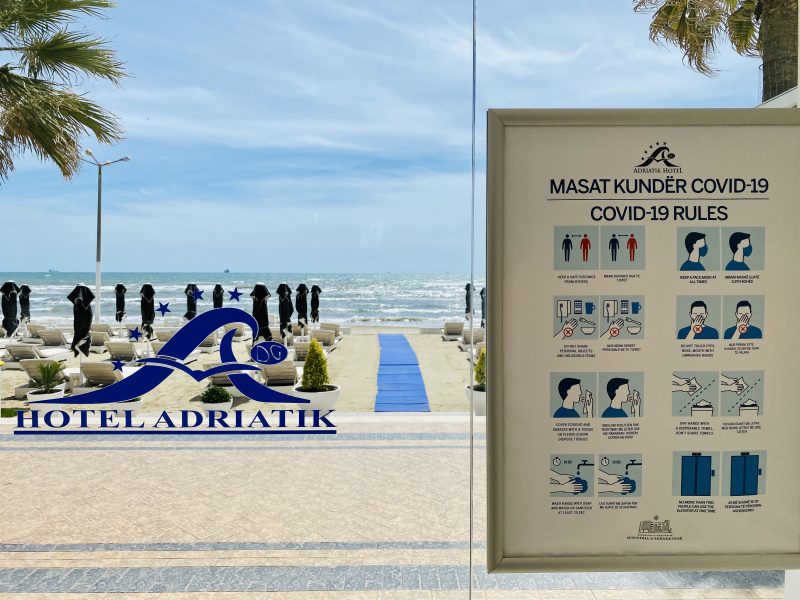 Not everyone has as much to complain about.

Dhërmi, in southern Albania, is a small coastal town located between Himarë and Vlorë. It is famous among Albanians and foreigners for its incredibly beautiful beaches and laid-back atmosphere.

Ernis Osmanaj, the owner of 2 Lips said that reservations this year are roughly equal with last year.

“The only difference is that for this season our customers are from Tirana, and not from the UK as last year,” said Osmanaj.

For Osmanaj, persuading customers to follow anti-COVID-19 protocols is the hardest thing. Customers have to submit to temperature checks and disinfection as they enter and exit the premises, he said.

Protocols put in place by Albania's government mandate that hotels and resorts employ an anti-COVID-19 “coordinator” to oversee such measures. Staff must wear masks and gloves at all times.

Moving further south, the coastal city of Saranda, has also been preparing for a difficult summer.

This is where tourists can see ancient ruins of Butrint National Park and enjoy a stroll on a charming promenade as well as the luscious beaches. 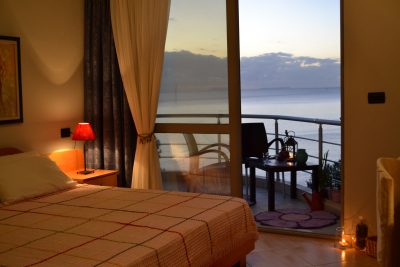 Seaside Artist Hotel in Saranda, photo provided by the management, used with permission.

At the Seaside Artist, a family-run restaurant and hotel in Saranda, reservations are down by 60% in comparison with last year. August reservations include tourists from Italy, while September promises to bring tourists from Bulgaria, Germany and Greece.

“This season we have had many cancellations due to the uncertainty of the pandemic situation. We will work last minute this season. Saranda hasn't had a single case of coronavirus and is ready to welcome tourists,” Rudina Toska from Seaside Artist hotel and restaurant said.

Adapting for the locals

Ejiris Shoshi helps hotels in Ksamil, close to Saranda, deal with bookings coming from online travel agencies. She is in direct contact with tourists who are spending their holidays on the Albanian Ionian sea coast. This year 72% of the reservations have been cancelled.

In Ksamil there has been a significant decrease in the number of Scandinavian tourists over the last two years — the destination is becoming popular with visitors from Poland, Ukraine, Romania and Russia instead. 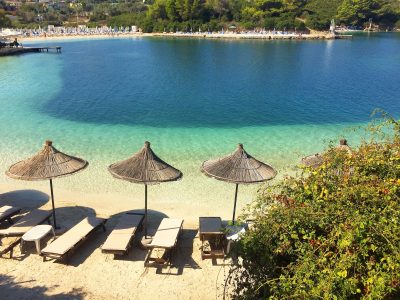 The private beach of Abalone hotel in Ksamil. Photo by Ardi Pulaj, used with permission.

“The very few reservations that we received are for August and September. It's an unpredictable season, due to the fact that local tourists book last minute and foreign tourists — limited to those who will have the financial means to travel this year — are unclear on how they can come, ” Shoshi said.

“The main concern of foreign tourists has been the travel — the border closures not only by Albania, but also by all the transit countries.”

Shoshi's agency, in cooperation with hotels in the area, have poured money into advertising campaigns on social media, setting their sights firmly on the domestic market.

Nevila Dudaj from Adriatik Hotel and Adriatik Tours agency said that the contribution of the ethnic Albanian diaspora is very important for the recovery of the tourism industry.

“Even at the New York Times Travel Show in January 2020, where I participated, I appealed to all Albanians, wherever they are, to visit and spend their holidays in Albania, as Albanian tourism should be supported by them. And now, more than ever, due to the COVID-19 pandemic, we need their support”, Dudaj says.

So far, tourists from Kosovo and the Western Balkans region have joined domestic tourists holidaying at Albania's beaches.

There are presently 2,047 registered coronavirus infections in Albania, which have resulted in 45 deaths.