"Time to stop burying our collective heads in the sand" 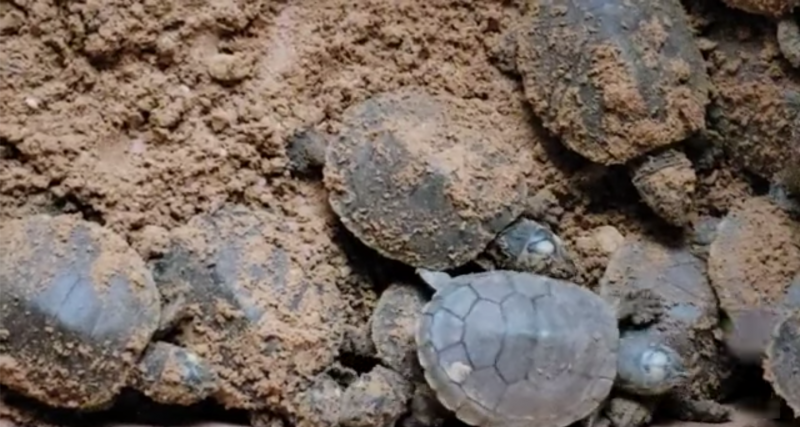 While there was heartening news, such as the century-old South American river turtle living at the Emperor Valley Zoo in Port of Spain welcoming 18 new hatchlings, there were also concerns about the continued negative impact that humans have on the environment.

Senator Clarence Rambharat, the country's minister of agriculture, land and fisheries, shared a video of the turtle hatchlings on his Facebook page, noting that the mother laid the eggs during the peace and quiet of the country's COVID-19 lockdown:

100 years old, 18 babies! […] It’s a signal made clear by COVID 19. As our planet develops at unprecedented speed, we must care for nature. Just over two months ago the Zoo announced the turtle laid eggs on land within its enclosure instead of the pond it had previously laid. The Zoo felt this was due to the closure of the facility in mid-March and the comfort the turtle may have felt in venturing out the pond and onto the sandy area to deposit the eggs. The hatching today is excellent news and demonstrates the importance on World Environment Day of striking the balance between human activity and care for nature. As UN Secretary General António Guterres says in his 2020 message, to care for humanity we must care for nature.

Meanwhile, the Facebook group The Land of the Hummingbird posted stunning photos of various types of hummingbirds, explaining:

To celebrate World Environment day, six of our little hummingbird gems. Trinidad and Tobago are so blessed to have 19 recorded species of hummingbird.

In that same vein, Facebook user Raquel Thomas-Caesar thought World Environment Day the perfect opportunity to acknowledge the contributions of some of the region's environmentalists, singling out two “top birders in Guyana,” who she says are “so humble and willing to share their knowledge.”

Ian Lambie, a well-respected environmentalist and past president of the world-renowned Asa Wright Nature Centre, was hopeful that the day would be marked meaningfully and shared a few ideas of how that could be done:

I am […] aware that the current COVID-19 Pandemic will put a ‘damper’ on celebrations. Nevertheless, I am hopeful that our Prime Minister and the Minister of Agriculture will take time off from their busy schedules to each plant a suitable tree of their choice on the perimeter of the Queens Park Savannah or in the Botanical Gardens. It is my wish that the newly appointed Chief Secretary of the Tobago House of Assembly and the Secretary for Agriculture of the THA, will each also plant a Flowering Tree in an appropriate place.

Despite the state TV station broadcasting a series in the lead-up to World Environment Day which focused on everything from a “little fish from Trinidad which has given scientists a new understanding of evolution and natural selection” to the “delicate balance […] struck between commerce and nature,” other social media users were more pragmatic.

Photography studio Rapso Imaging was realistic about the challenges, reposting images of the country's main landfill — shots that won photographer James B. Solomon's first place in the professional category of the European Union's 2019 competition on the environment:

We are all connected to our garbage dumps as it is we who generate this waste that in turn severely impacts our environment. Venturing into the middle of stink of it was the only way that he was able to return with an image that tells the story of what we choose to ignore.

Of course, we could easily share the pretty, the beautiful, and the breathtaking images, while ignoring the fact that we are choking our planet with the pollution we are generating, if we are not careful, humanity will pay the price.

Today on World Environment Day, I chose not to share a pretty picture, this is our truth, our reality and it is time to stop burying our collective heads in the sands. This is simply [no] other issue that needs to be addressed in our World today, Our very survival depends on it.
#sharethetruth, #worldenvironmentday

Undoubtedly, the country and the wider Caribbean region have a lot a stake when it comes to the environment. Small island developing states are at the greatest risk for the devastating effects of climate change, including rising sea levels, coral bleaching, and the impact of tourism developments on coastal areas. Each Atlantic hurricane season, monster storms have been ravaging the region with increasing intensity.

With this context in mind, journalist Wesley Gibbings, in a private status update republished here with his permission, took the conversation even further:

Kinda hard in the current global political environment not to envisage observance of World Environment Day as an occasion to press more for climate justice and all the accompanying bits and pieces of social justice. Outside of that, the cute boots and gloves and garbage bags on the beaches don't mean that much to me.