‘We Dare Not Look Out': Dominica Is Brutalised by Hurricane Maria 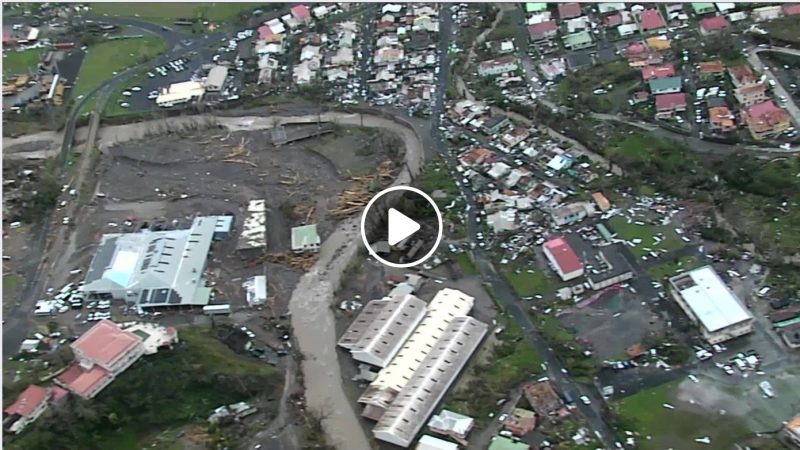 A still from an aerial video showing the near total devastation in Dominica after the passage of Hurricane Maria, September 19, 2017. Video by CDEMA – Caribbean Disaster Emergency Management Agency; shared widely on Facebook and Twitter.

The northern Caribbean has been on the front line of the assault from the 2017 Atlantic hurricane season. Shortly after Irma, a Category 5 storm, ravaged the leeward islands, Maria — also a Category 5 — set her sights on Guadeloupe, Dominica, St. Kitts/Nevis and Montserrat.

Dominica, home to about 73,000 people, was one of the hardest hit. In the aftermath, the country's prime minister said the hurricane had “devastated” the island.

Maria made landfall on the evening of September 18. By the next morning, social media users region-wide were sharing photos of what claimed to be the aftermath of the storm in Dominica, but it turned out that some of the images being shared on WhatsApp chats and Facebook pages were fake — much of the communication on the island had been damaged, making it difficult for citizen journalists on the island to share anything. Others, however, were authentic.

Please don't circulate photos you can't authenticate. That's to say nothing about the copyright implications. Most of those Dominica images are not from Hurricane Maria.

Prime Minister Roosevelt Skerrit, however, communicated as much as he could have via his official Facebook page. He, like many other Dominicans, had lost his roof, confessing that he was “at the complete mercy of the hurricane”. In the heat of the onslaught, he posted:

We do not know what is happening outside. We not dare look out. All we are hearing is the sound of galvanize flying. The sound of the fury of the wind. As we pray for its end!

The small island nation was forced to battle maximum sustained winds of close to 160 miles per hour.

In an update early on September 19, he said:

Initial reports are of widespread devastation. So far we have lost all what money can buy and replace. My greatest fear for the morning is that we will wake to news of serious physical injury and possible deaths as a result of likely landslides triggered by persistent rains. […]

I am honestly not preoccupied with physical damage at this time, because it is devastating…indeed, mind boggling. My focus now is in rescuing the trapped and securing medical assistance for the injured.
We will need help, my friend, we will need help of all kinds.

It appears as if Dominica bore the brunt of the damage, though the neighbouring French-speaking islands of Guadeloupe and Martinique did have fatalities and destruction of property.

Regional netizens were heartbroken. In Jamaica, Annie Paul admitted that she was “really feeling it for the storm-fatigued islands of the Eastern Caribbean”, while Trinidadian Soyini Grey confessed:

The news from Dominica is making me sick

If T&T isn't ready for a natural disaster, imagine what it's like for the tiny islands without our infrastructure & oil & gas money

In solidarity, Dele Adams, who is in St. Kitts, one of the islands that recently faced Irma, posted: 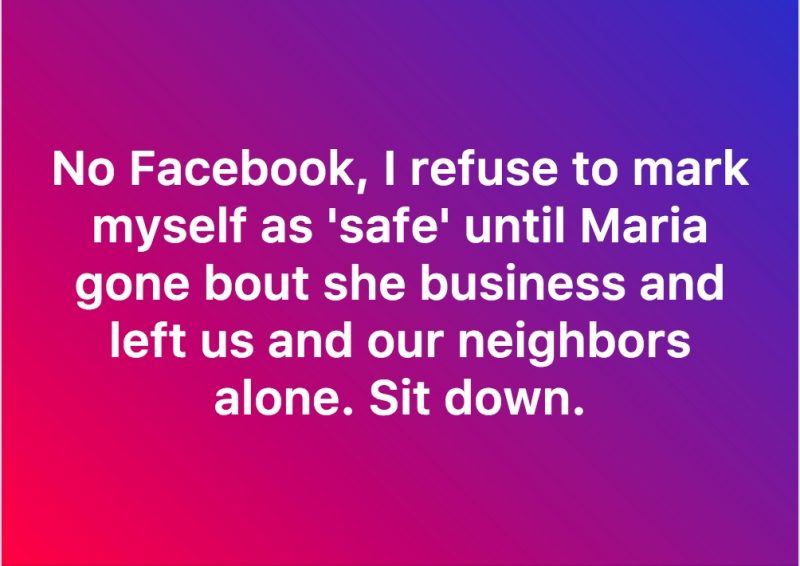 A public status from Facebook user Dele Adams, who said, “No Facebook, I refuse to mark myself as ‘safe’ until Maria gone bout she business and left us and our neighbors alone. Sit down.”

Just as happened after Irma, Caribbean citizens rallied to send aid and supplies to the hardest-hit islands. There are already quite a few donation drives requesting everything from canned food and medical supplies, to toiletries and tools — but the brutality of this hurricane season also got social media users thinking:

This hurricane season is showing me that we have to plan, build, communicate and live to suit our environment and seasons.