The island's reefs are on "Bleaching Alert Level One" 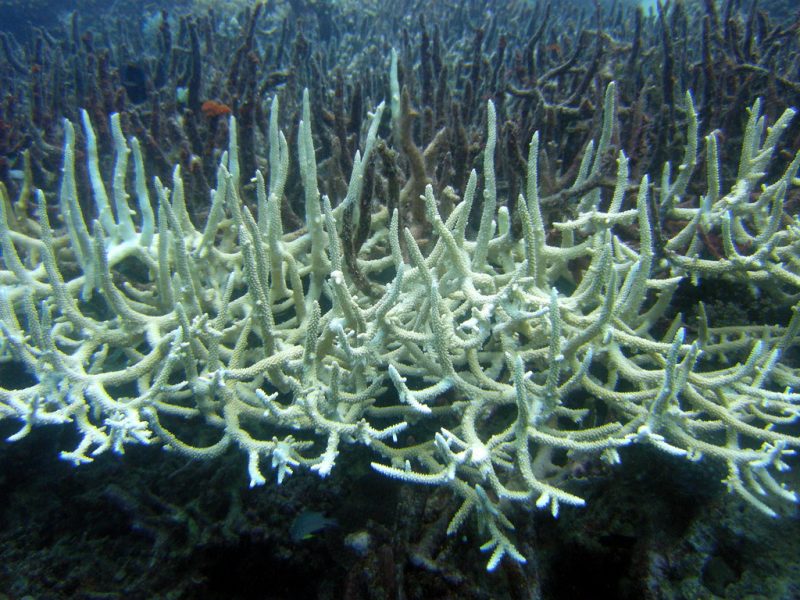 Tobago's coral reefs are an integral part of both the island's marine ecosystem and its economy. Home to numerous species of marine life (and a main source of fish for local fishermen), they also protect the coastline from wave erosion and the effects of tropical storms. Popular spots like Buccoo Reef are also popular tourist attractions.

But after a press release issued by the country's Institute of Marine Affairs (IMA) on August 22, 2019, in which it warned that — based on findings from the National Oceanic and Atmospheric Administration's (NOAA) Coral Reef Watch — Tobago's coral reefs have been placed on a watch for “Bleaching Alert Level One”, all eyes are on the island. There is a distinct possibility that the bleaching could advance to Level Two within a matter of weeks, which would threatens not only the existence of the reefs themselves, but also the island's marine life and people.

What exactly is bleaching?

Corals coexist with and become home to symbiotic algae, helping it store nutrients and remove waste. In return, the algae gives the coral the energy it needs to grow, but drastic changes in water temperature can threaten this cooperative relationship.

When water becomes too hot (or too cold) the corals expel the algae — and with it, its main source of food. Eventually, the coral starves to death; the most noticeable outward sign of this phenomenon is that the coral loses its colour, going from shades of brown and green to a crisp, brittle, bone white.

Bleaching Level Alert One means that the corals are extremely likely to start the bleaching process. The IMA therefore suggests that both biologists and citizens should keep an eye out for signs of bleaching over the next 9-12 weeks.

Level Two bleaching would be an indication of widespread coral bleaching and coral mortality.

According to local coral reef ecologist Anjani Ganase, the main contributors to coral bleaching in Tobago are the warmer water temperatures — a result of climate change.

Via email, Ganase explained that the ocean absorbs much of the heat in the atmosphere, which in turn causes the water — especially shallower bodies of water, like the Caribbean Sea — to heat up.

In fact, NOAA's 12-week outlook extends well past Tobago to the reefs of the Lesser Antilles. Other reefs around the region, most notably in parts of the Greater Antilles and Cuba, have already been placed on a Level Two Bleaching Alert:

This makes me so sad. The coral reefs in Tobago have been dying for years. The littering, fishing, oil/gas emissions have destroyed our beautiful reefs. We just have to try and protect what is still there?? https://t.co/4R053KMVOL

What are its effects?

Coral bleaching is a huge threat. Because reefs provide fishes with a habitat that allows them to have access to shelter, food and most importantly, shelter for their young until they are ready to survive in the wider ocean, the proposition of losing them will impact the ability of fish species to survive. It will also negatively affect the livelihoods of local fishermen.

Tobago relies very heavily on its local tourism industry; its reefs reportedly attract around 40 per cent of the island's tourists. Should coral bleaching continue, there will be fewer thriving reefs for people to explore and quite likely, a reduction in tourism dollars, which affects a range of hospitality-related industries: hotels, restaurants, transport services and tour companies.

The great irony is that, as tropical storms intensify as a result of the climate crisis, reefs are needed more than ever to absorb the force of waves and create a buffer between the ocean and the shore — but the reefs are compromised by global heating.

Studies show that coral reefs protect around 90 per cent of Tobago's shoreline from wave-induced erosion.

In a feature address at the International Year of the Reef at the University of the West Indies in 2018, Professor John Agard said that this function will only become more important as storm intensities increase and sea levels rise.

What can we do to stop it?

Ganase says the lack of proper management that has allowed overfishing and pollution to go unchecked has made Tobago's coral bleaching worse. If this continues, she explains, active management and protection will be critical for full recovery and growth:

Ideally, coral reefs should be closed to the public and placed into an intensive recovery programme to ensure healthy fish communities and water quality that will support coral growth and recruitment.

Individual actions to reduce our carbon footprintare are always warranted but we also need citizens to demand more action from our governments to provide the infrastructure, resources and education for climate conservation and adaptation. Communities need the support to manage and conserve our natural resources not just from governments but from businesses and corporations that also utilise these resources.

There is a pressing need for regional island governments to demand an international effort in tackling the climate crisis. On September 11, 2019, Barbadian Prime Minister Mia Mottley addressed this issue at the United Nations’ Geneva headquarters, urging larger nations to do better in fighting climate change. The islands of the Caribbean, she said, “do not have the luxury of time because [we] are busy trying to survive”.

Ganase agrees about the urgency of the matter. Any and all forms of aid in tackling climate change and coral bleaching, she said, especially on political levels, “requires effort”:

It's not going to be easy as seen internationally, but there is really no alternative.