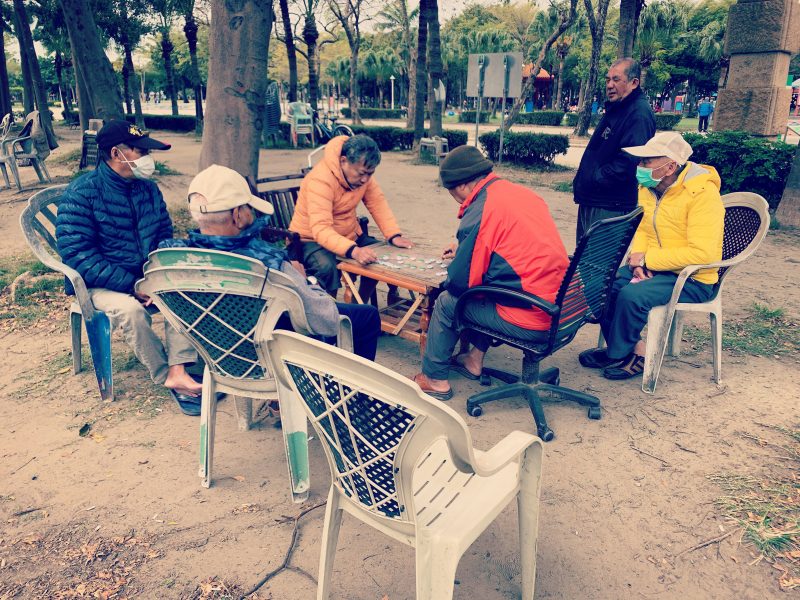 Elderly citizens, the most at risk in the case of 2019-nCoV infection, sitting in a public park in Tainan, Taiwan's fourth city on January 20, Half of them wear respiratory masks. Photo by Filip Noubel, used with permission.

Taiwan finds itself at the frontline of the Wuhan coronavirus also known as the  2019-nCoV coronavirus epidemic given the multiple ways that it is connected to China. But this challenge doubles as Beijing prevents the island nation from participating in international organizations such as the World Health Organization (WHO) which plays a key role in global public health prevention and crises.

Cross-Strait relations present in all aspects of life in Taiwan

Though Taiwan is separated from the People’s Republic of China (PRC) by the 180-km-wide Taiwan Strait, and has so far confirmed only 8 cases of the 2019-nCoV coronavirus infection, the two countries maintain close economic, labor, academic, tourism relations that explain why large numbers of people travel across the Taiwan Strait extensively on a daily basis.

An estimated one to two million Taiwanese citizens live in mainland China, where they work, study, or accompany their families. Taiwanese employees mostly work in Taiwanese companies and factories that have invested in China or are employed by Chinese and foreign companies. An estimated 12,000 young Taiwanese also choose China as their third most popular destination to study after the US and Australia, and benefit from special advantages to study in China. In 2019, the PRC was Taiwan’s top trade partner, representing almost 30 percent of Taiwanese exports.

Taiwan hosts close to 10,000 mainland students on its soil. On January 29, the Taiwanese Ministry of Education authorities announced a temporary ban on exchanges for PRC students and trainees.

Besides, many families that were split after the Kuomintang took refuge on the island in 1949, after a long civil war in mainland China, are now able to visit each other. In 2019, close to 100,000 PRC citizens visited Taiwan.

Taiwan clearly stands as one of the most vulnerable places for the spread of the virus after the PRC given that many of the Taiwanese living in or visiting the PRC can be expected to return to Taiwan if the epidemic continues to spread. According to data released in the PRC:

Among the 5 million people who fled the novel coronavirus-affected Chinese city of Wuhan during the Lunar New Year holiday, 7,515 headed to Taiwan.

Wuhan is a major industrial center hosting the top 500 companies where a number of Taiwanese are employed. In this context, it comes as no surprise that the first seven cases of the 2019-nCoV coronavirus were all confirmed in people from Wuhan or who had recently traveled in Wuhan.

Beijing continues to block Taiwan’s participation in the WHO

What is perhaps more surprising is that despite such strong integration of human and economic exchanges, the WHO refuses, under pressure from Beijing, to integrate Taiwan in its global fight against and prevention of the epidemic.

In 1971, Beijing took over Taipei’s seat at the United Nations as the international community gradually switched diplomatic allegiance from the Republic of China (ROC), Taiwan’s official name, to the PRC. Taiwan officials were sidelined from UN meetings, including from the WHO, yet often tolerated until 2013 when Xi Jinping-led Beijing decided to enforce a full isolation policy.

As a result, Taiwan was excluded from a key emergency meeting on January 22 at the WHO discussing measures to fight the 2019-nCoV coronavirus.

The row has since expanded to another UN body, the International Civil Aviation Organization (ICAO) that until 2013 tolerated the presence of Taiwanese officials but has since blocked any participation, including in the most recent meetings dedicated to the 2019-nCoV virus. Health control in airports and planes is now paramount to contain the epidemic as the Chinese New Year break is ending and many travelers are expected to fly globally.

The rejection has been met with criticism across all political parties in Taiwan and is echoed by netizens who post under a trending hashtag in Taiwan: #TaiwanCanHelp

What makes you so silent?
Block All of talking about #Taiwan speech?
Or UN is #China Government organization?

I am ashamed of having such an organization internationally.#TaiwanCanHelp @UN @icao @WHO pic.twitter.com/zmTU2pQcXU

Traditional allies of Taiwan, mainly Japan and the US, have since expressed their support for Taiwan's bid to reintegrate into these key international organizations. On January 30, Japanese Prime Minister Abe Shinzo reiterated his support to Taipei, as one netizen notes:

Did you know Taiwan has been left out of the @WHO because of pressure from China? As #WuhanCoronavirus cases keep rocketing – including Taiwan – Japan’s Prime Minister Abe has now said Taiwan needs to be part of the global health body to fight this #MadeinChina virus. https://t.co/Zg4QZdsJCI

Similar calls were made by US state officials in January and most recently by Canada. Meanwhile, Beijing has refused to give permission to Taiwan's authorities to evacuate Taiwanese citizens currently residing in Wuhan.

Taiwan is bracing for a larger epidemic

Meanwhile, Taiwan has taken several measures to protect its population, including a ban on exports of surgical masks that are now unavailable in most pharmacies — the supply system has been on hold during the Chinese New Year break. The government justifies this measure by pointing out that most masks sold in Taiwan are imported from China:

Some have called Taiwan's decision to stop mask exports inhumane. However, Taiwan has traditionally relied on imported masks from China. #WuhanCoronavirus is likely to reduce China's capacity to export masks. The export ban aims to ensure we have steady supply of masks in Taiwan. https://t.co/FilUqUNhjg pic.twitter.com/inBHRc6qr6

While the authorities take the threat seriously, even fining one Taiwanese citizen 10,000 US dollars as he failed to declare his illness upon returning from Wuhan, they have not imposed the use of masks in public spaces. However, a cursory look on the streets indicates that nearly half of the people are wearing them already. This food store in Tainan has a sign in Chinese, English, and Japanese where the original Chinese says: “In order to prevent the new Wuhan coronavirus, please wear a mask when needed”: 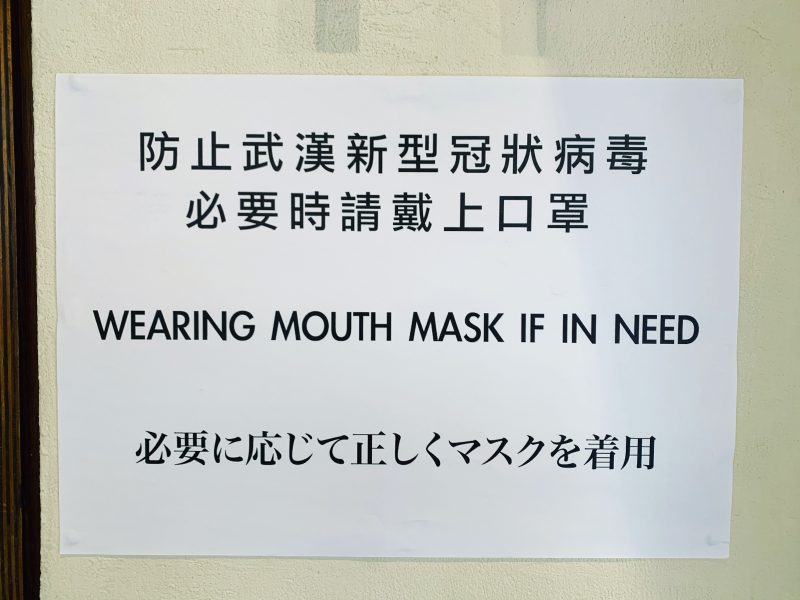 Street sign on a shop in Tainan in Chinese, English and Japanese. Photo by Filip Noubel, used with permission,

Certain large public events scheduled in February, such as the Taiwan International Book Fair (TIBE), featuring Chinese, Taiwanese and other writers and expecting half a million visitors and scheduled to start on February 4, got cancelled.

A Google search in Chinese on news trending in Taiwan today shows all top news are 2019n-CoV related.