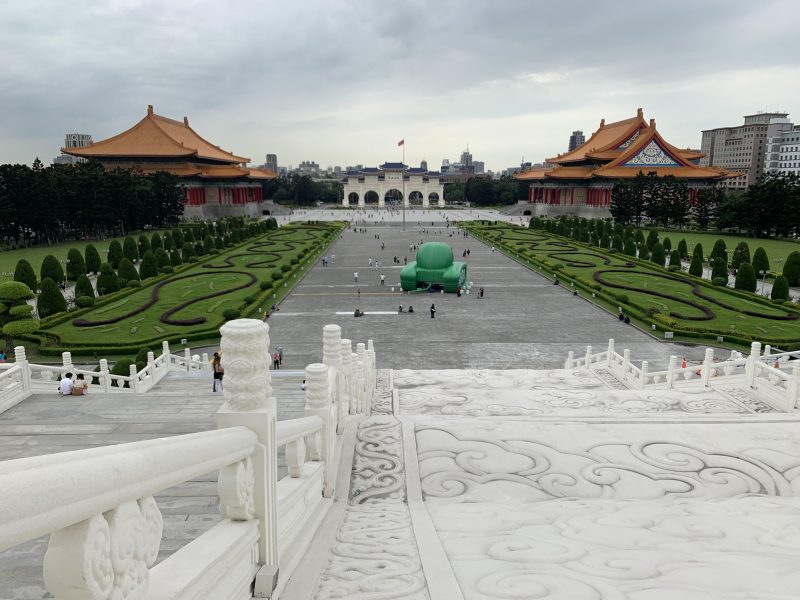 Taipei's Liberty Square where an inflatable tank commemorating the 30th anniversary of the Tiananmen Massacre was displayed in May 2019. Photo by Filip Noubel, used with permission.

The legal status of Taiwan is one of the most contested issues in international relations. In Taiwan itself, the majority of its 23 million inhabitants view their island as a sovereign state under the label of the Republic of China (ROC), while a fraction of the population calls for it to declare full independence. In China, the position of the government is that Taiwan is a province that is part of the People’s Republic of China (PRC), even though it is not currently under its political or administrative control. Beijing strongly opposes any description of Taiwan as a sovereign or independent state. Citizens in mainland China hold a variety of views on Taiwan’s status, but at least publicly, tend to align with their government’s views. The issue is also strongly debated in the campaign leading to the January 2020 Presidential elections in Taiwan.

When did the split happen?

The origins of the existence of two separate entities, the ROC and the PRC, go back to two different political parties that were once allied, later fought a civil war, and ended up governing different territories.

The first one is the Kuomintang (KMT, in Chinese 中國國民黨 , or literally the Chinese National Party), a party that was established in 1911, as the last Chinese Qing dynasty collapsed and China became a republic. Its ideology is based on the Three Principles of the People, namely nationalism, democracy and the people’s livelihood. It is important to note that the Chinese Communist Party (CCP) also adhered to those principles in its early history and that both parties were initially supported by the Soviet Union.

The second party is the Chinese Communist Party (CCP, in Chinese 中国共产党), founded in 1921. It bases its ideology on Communism, initially adopting the Soviet model, and later developing its own version. Until 1927, the CCP was generally in alliance and in support of the KMT.

After that date, both parties parted for a few years, mostly because of ideological differences, but decided to reunite in 1931 in a joint effort to combat the Japanese invasion of China. This period, known as the Second United Front, lasted until the early 1940s when once again competing ambitions brought back a lasting split.

Starting in 1946, both parties engaged in a full civil war which ended in 1949 when the CCP gained control over mainland China, while the KMT, together with two million soldiers and refugees, decided to flee to the island of Taiwan. From 1949 on, both parties have claimed to be the sole legal representative of China.

The Republic of China in Taiwan 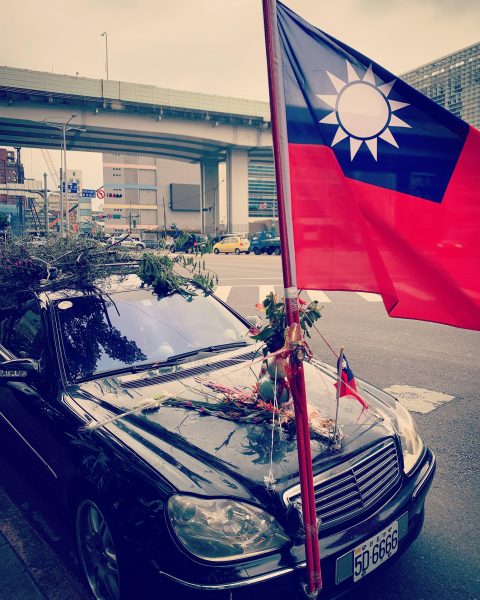 A ROC supporter decorating their car with the ROC flag in Taipei. Photo by Filip Noubel, used with permission.

As the world engaged in the Cold War, dividing continents and countries between governments supported by Moscow or by Washington and the West, Taiwan gained significant importance. The Korean War, followed by the Vietnam War made the island a strategic, military and political base to serve US interests in Asia. Washington thus provided economic aid, and pledged political and military support to the Republic of China in Taiwan, refusing to recognize the People’s Republic of China diplomatically. Those years were crucial for the KMT to gain absolute control over Taiwanese society, and gradually build a modern economy on the island.

The switch from Taipei to Beijing

In practice though, around 50 countries maintain a representative office in Taiwan that covers most of the activities usually attributed to an embassy or a consulate. By the end of 2019, only 15 countries maintain full diplomatic relations with Taiwan.

The international community sometimes uses the term ‘Chinese Taipei’ to describe Taiwan. This label is mostly used during the Olympic Games, but also by organizations such as the World Trade Organization.

The Republic of Taiwan?

While today the international community is happy to maintain the current status-quo when dealing separately with Taiwan and China, certain political forces in both places are advocating for a change.

In Taiwan, there is a movement calling for abandoning the term of and references to the ‘Republic of China’ in order to replace it with the term of Taiwan, or the Republic of Taiwan. Two political parties are particularly vocal about this issue: the Formosa Alliance and the Taiwan Solidarity Union. This movement traces its origins to the Japanese colonial rule of Taiwan from 1895-1945 and has evolved since the 1990s into several political parties, civic movements, with claims for cultural and linguistic rights.

Most opposed to this political view is the KMT that embraces the identity of the Republic of China and believes in the reunification of Taiwan and China in the long term.

The DPP has a much more ambiguous position: as part of the Green-Coalition, it supports the notion of Taiwan being a sovereign state and not seeking reunification with the PRC. Yet whether Taiwan refers to ROC limited to the territory of Taiwan, or whether this position could evolve into the declaration of a Republic of Taiwan is an issue articulated differently at various times depending on the electoral calendar, and personal views of the DPP leaders and top officials.

For Beijing, any notion of an independent Taiwan is unacceptable. Beijing continues to state that reunification under the CCP is its official policy and strategy for the future, and does not rule out the use of military force. It believes that the ‘One Country, Two Systems’, currently applied to Hong-Kong and Macao, is the framework for reunification.

Meanwhile, Beijing is reinforcing its policy for the containment of Taiwan in diplomacy and other areas. It has successfully convinced a number of countries recognizing Taiwan to cut ties and switch to China. Besides this, it is successfully imposing its views in a number of economic activities, forcing foreign airlines, online retailers, cultural and academic actors to use the term ‘Taiwan, China’ when advertising services or announcing events in order to avoid facing possible retaliation, sanctions, or denial of access to the Chinese market.