Do Macedonians want their country to join NATO and the EU? A historic referendum will decide 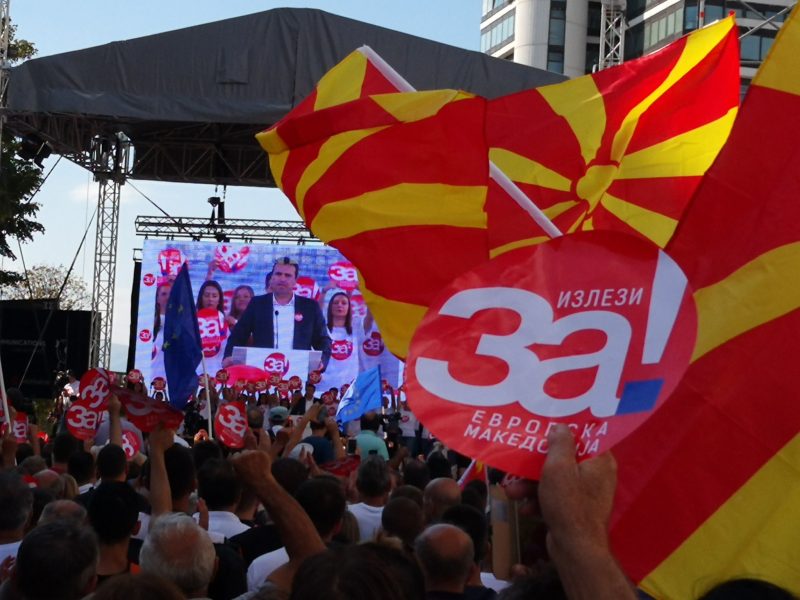 Pro-referendum rally on 16 September 2018 in Skopje. Photo by Andreja Stojkovski via Twitter, used with permission.

On September 30, Macedonians will vote in a referendum to decide whether their country should join the North Atlantic Treaty Organization (NATO) alliance and the European Union (EU).

The referendum is part of a process that began in 1993, when all political parties in the then newly independent Republic of Macedonia declared joining NATO a key strategic priority. Many believe that membership in the military alliance would help protect Macedonia, located in the volatile Balkans region, from external aggression and civil war. Years later the country made a similar commitment to strive for EU membership.

Admission to both NATO and the EU require the consensus of all existing members, so Macedonia needed first solve bilateral disputes with its neighbors, some of which already belonged the two organizations.

The biggest obstacle was the long-standing naming dispute with Greece, which has hindered Macedonia's development for 27 years. In June 2018, as a precondition for removing the Greek veto on its EU and NATO membership, Macedonia signed an agreement which obliges the country to change its name to the Republic of North Macedonia.

In spite of the agreement, the name change remains a core issue. The September 30 referendum explicitly asks:

A majority must participate

The referendum is not legally binding but rather consultative, and will only be considered valid if a majority of registered voters participate. But failure to reach the required 50 per cent voter turnout would not stop the NATO and EU accession process, which requires further action by parliament.

September 30 provides an opportunity to finally move from the status quo which has stymied us, to finally break free from a bizarre problem that has been holding us down for almost 30 years. That's why #IVote.

For other voters, the referendum is both symbolic and cathartic, representing a return “to the right path” after “the lost decade” of democratic backsliding, and many have been holding their breath in anticipation:

The whole state has become neurotic, everything is left [for] ‘after the 30th’. Even if you want to buy a sandwich, the barbeque lady might say, ‘Not now, let's do it after the 30th, after the situation clears’.

Calls for a boycott

This anxiety may have to do with the boycott campaign being waged by right-wing populist opponents and led by several fringe non-parliamentary parties, including pro-Russian, Euro-skeptic and anti-NATO United Macedonia, which styles itself on Putin's United Russia.

The campaign stokes the fears of ethnic Macedonians by presenting the country's name change as the first step along a slippery slope that will lead to genocide, or ethnocide. The campaign is steeped in disinformation and hate speech, from intentional misinterpretations of the consequences of the agreement with Greece, to claims that the government has given citizenship to Albanians from Kosovo to boost the number of “yes” votes. There have even been suggestions of election fraud, to which one Twitter user replied:

When you really think that authorities plan voter fraud, citizens go out and vote to make it harder for them, they don't sit at home.

Meanwhile, the main opposition party VMRO-DPMNE, a member of the conservative European People's Party (EPP), has sat on the fence, neither openly endorsing the boycott campaign nor encouraging its supporters to participate in the referendum and vote against the agreement with Greece, which it considers “a capitulation”.

Other EPP members have accused VMRO-DPMNE of hypocrisy, as high ranking party officials participated personally in the boycott, and the campaign was vigorously promoted by media outlets reputed for being party mouthpieces.

Representatives of the ruling SDSM have also claimed that VMRO-DPMNE had attempted to make a deal, promising to throw its support behind the referendum if its former party leaders on trial for corruption were given an amnesty. The government refused, and the VMRO-DPMNE's indecisive position is largely being interpreted as sign of weakness:

VMRO-DPMNE has no official position on one of the most important issues for Macedonia, and has declared that people should vote according to their own preference. In the next elections, I expect that they will adopt the same position and won't advocate whom to vote for.

On social media the “I boycott” campaign (#бојкотирам) started over the summer, and involved mainly anonymous social media profiles and sock puppets from the VMRO-DPMNE troll army. Observers noticed a high number of new profiles appear in August 2018, suspected to be automated bots originating outside the country. The campaign was also shared via profiles linked to specific individuals, including VMRO-DPMNE’s foreign lobbyists, Macedonian nationalist organizations operating in the diaspora, and Macedonia's president, who gained his position with the party's support. 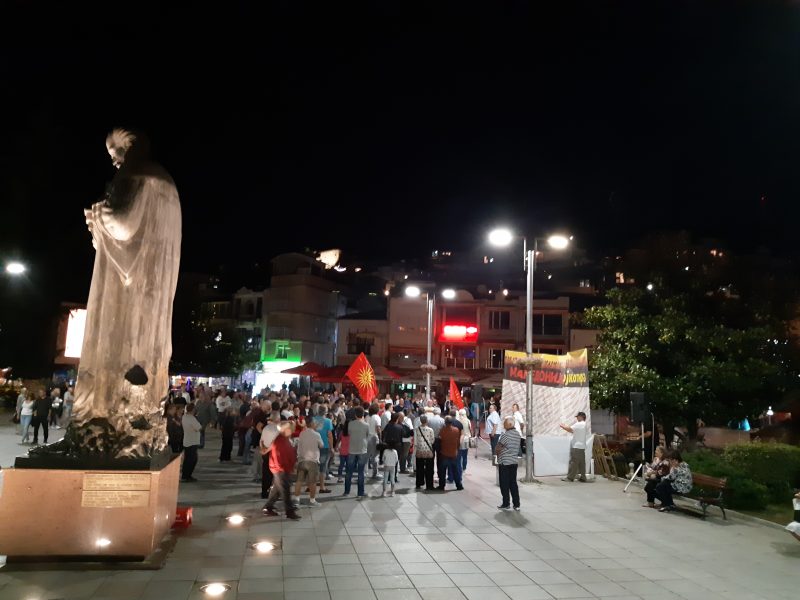 Around 50 people attended the Boycott campaign rally in Ohrid on 22 September. Photo by GV, CC-BY.

Western sources alleged that Russia was trying to obstruct the consolidation of the NATO and EU process; when asked, Prime Minister Zoran Zaev diplomatically said that the authorities have not found “evidence of direct Russian influence with fake news” regarding the referendum, and that he trusts Macedonia's NATO allies on this matter.

Prior to that statement, however, Zaev was less reserved in pointing to Kremlin-related attempts — including the funding of violent protests by a Greek-Russian oligarch — to obstruct the deal with Greece. Moreover, an independent journalist discovered that back in 2015, a Russian troll farm specialist named Anna Bogacheva had visited Macedonia on business. She has since been named as one of 13 Russian nationals indicted over alleged interference in the 2016 United States election.

The “I Boycott” campaign has also employed tactics used by the American alt-right, including use of the Pepe the Frog meme, which was ridiculed even by VMRO-DPMNE members who couldn't understand how their party's symbol, the mighty lion, was reduced to a frog.

There have been attempts, mostly through cyber-bullying, to intimidate activists and ‘dissenting’ right-wing figures who have said they will take part in the referendum. Former VMRO-DPMNE government minister Nikola Todorov's revelation that he would vote “no” exposed him to particularly vicious harassment on Facebook. But in spite of some of the threats issues, observers don't expect much violence.

Numerous citizens have also expressed their support for both the referendum as the ultimate tool of democracy, and for the government-backed campaign to vote in it:

If surveys conducted in the months before the referendum are anything to go by, most Macedonian citizens are ready for change, even if that means swallowing the bitter pill of the name change in exchange for the long-term benefits of NATO and EU membership.