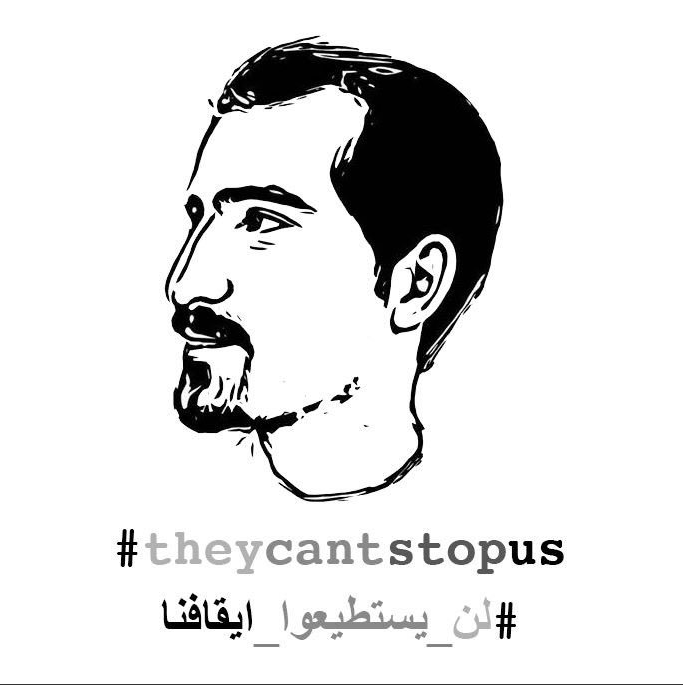 Photo of Bassel used on social media in his honor, based on a Tweet he sent on December 17, 2011. Used with permission.

On August 1, 2017, Noura Ghazi Safadi revealed that her husband, the famous Palestinian-Syrian open web activist Bassel Khartabil (aka Bassel Safadi), was executed by the Assad regime days after being taken from Syria's notorious Adra prison, where he was held, in October of 2015.

Bassel was a close friend of many in the Global Voices community and participated in our 2009 Arab Bloggers Meeting. We had been calling for his release since his disappearance in 2015.

Bassel could trace his origins to Safed, a Palestinian town in the Galilee region of historic Palestine, and one of the many areas from which Palestinians were ethnically cleansed by Zionist militias in the context of the creation of the State of Israel, an event Palestinians call the ‘Nakba’, or ‘Catastrophe’ in English.

He was well-known for his advocacy of online access and open knowledge to the Syrian public, as well as bringing open-source software to Syria.

In two separate statuses, one in Arabic and one in English, Noura wrote:

Words are difficult to come by while I am about to announce, on behalf of Bassel's family and mine, the confirmation of the death sentence and execution of my husband Bassel Khartabil Safadi. He was executed just days after he was taken from Adra prison in October 2015.
This is the end that suits a hero like him.
Thank you for killing my lover.
I was the bride of the revolution because of you.
And because of you I became a widow.
This is a loss for Syria.
This is loss for Palestine.
This is my loss…

The news of Bassel's execution mobilized many from the Syrian and/or open source and free Internet advocacy movements.

We can't walk in your procession our dear. We can't celebrate your martyrdom. O Martyr, we can't put roses on your grave, O Bassel.

O Bassel and Noura, you broke us. We are so helpless and defeated.

Hassan had written an article in late 2016 entitled ‘Syria's Desaparecidos‘, in which she speaks of Bassel as a symbol of Syria's “third alternative”:

Much has been said about the lack of a ‘third alternative’ in Syria, which has been cast by western media as a binary conflict between a military dictatorship and Islamists.
Bassel and Noura opposed both while also rejecting foreign intervention, as do thousands of Syrians who are still languishing in the Syrian regime’s jails. Surrounded by some terrorists in suits and others with long beards, and betrayed by a fragmented opposition handcuffed by donor states and driven by foreign agendas, there are Syrians who want to reclaim a country they could call home; a country where they wouldn’t have to choose between assorted evils; where they don’t have to choose between death by beheading or shelling or starvation.

Murhaf Fares, from the Oslo-based Syrian Peace Action Centre, who is in exile, reflected on Bassel's death by mentioning two schoolmates from Damascus University that are still missing to this day:

Waseem Abu Zenah a unique person in every sense of the word. He died under torture in April 2014; here's his story: https://t.co/WXYK87uy2U

Humam was arrested by Assad's security forces in September 2012. Almost five years now and no word of Humam. pic.twitter.com/GtZ5sa6xfW

Over 60 Syrian organizations honored Bassel and demanded that all prisoners of conscience be released in Syria. Their demands were translated by Global Voices contributor and co-founder of Social Media Exchange, Mohammad Najem, who was a good friend of Bassel's:

Najem would send Bassel books to read and Bassel was particularly happy to receive a book by the Persian poet Rumi. Najem shared the letter on social media:

Today, we officially lost a brilliant man, and a friend. RIP @basselsafadi pic.twitter.com/yrTWJFo1nj

A project I did with Bassel, from jail he shared tweets, and I posted it. We agreed on the username, hashtags.. He also wrote blogposts. <\3 https://t.co/k2xy2yqUO1

Washington Post's Liz Sly revealed that Bassel was one of her unnamed sources in the early months of the revolution, reflecting that she can now reveal that information:

Bassel Safadi was quoted unnamed in many of my early stories about the Syrian protests. It's tragic to be naming him because he is executed

Amnesty International's Senior Director of Research, Anna Neistat, said that “Bassel Khartabil will always be remembered as a symbol of courage, who peacefully fought for freedom to the very end”, adding that his death is “a grim reminder of the horrors that take place in Syrian prisons every day”:

The tens of thousands of people currently locked away inside Syrian government detention facilities face torture, ill-treatment and extra-judicial executions. These cruel acts undoubtedly amount to war crimes and crimes against humanity.

Bassel Khartabil will always be remembered as a symbol of courage, who peacefully fought for freedom to the very end https://t.co/xmHrRIy2mh pic.twitter.com/XbxTcA2HuZ

A terrible loss. Hundreds others were also executed at the hands of this terrible regime. #Syria https://t.co/TGmttCuk4I

3: At least 3000 Palestinian Syrians were murdered at the hands of the Syrian regime

Jimmy Wales and The Jimmy Wales Foundation are strongly condemning the criminal execution of Bassel, an innocent activist, and sending our deep condolences to Bassel’s wife and family.

With sadness and outrage we learned today that our colleague Bassel Khartabil was murdered by the Syrian regime. https://t.co/091RlgmuAo

Access Now used the #WhereIsBassel hashtag, which was the one used when Bassel first went missing:

The MIT Media Lab, which had offered Bassel a research scientist position in the Media Lab’s Center for Civic Media, also acknowledged the great loss. It turned out that they had made the offer around the same time of Bassel's reported execution:

As Bassel was a Wikimedian, the Wikimedia Foundation also mourned him:

“We can’t fight jail without memory and imagination.” @Wikimedia mourns the loss of Bassel Khartabil https://t.co/pcNO3MhQxH

The Electronic Frontier Foundation (EFF) released a number of letters that Bassel had sent to them. In one of them, dated March 15, 2015, from Damascus Central Jail, he wrote:

As long as you people out doing what you are doing, my soul is free. Jail is only a temporary physical limitation.

EFF is honored to share the letters we received in 2015 from activist Bassel Khartabil, whose death in Syria was confirmed this week. pic.twitter.com/kaeY7Fj4YF

In the subsequent Twitter thread, the EFF explained Bassel's role in promoting the open internet in Syria:

Bassel created Aiki Lab, Syria's first hackerspace, in Damascus in 2010, and helped open the internet to the Syrian people. He worked with global contacts, including EFF activists, to advance freedom of speech and access. He received a number of awards including the 2013 Index on Censorship Digital Freedom Award for using technology to promote an open Internet. Among many, many accomplishments, he was a contributor to Mozilla and Wikipedia, and he was the Syrian lead for Creative Commons.

Bassel's commitment to free expression, an open internet, and open source software is an example for all of us. https://t.co/e2CorleEcz