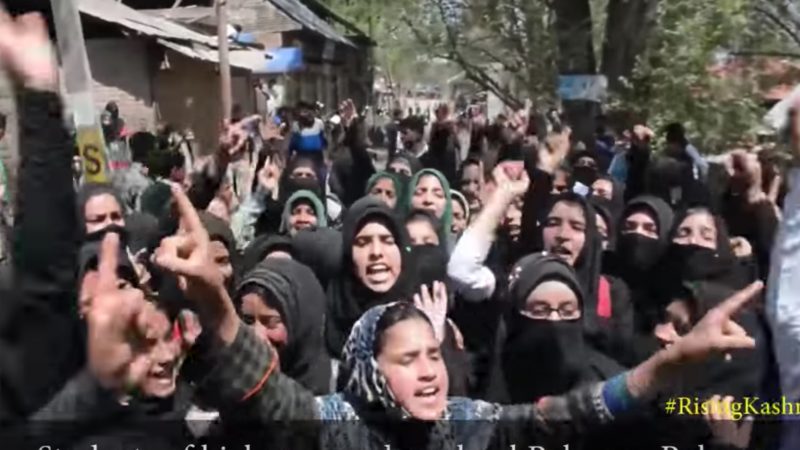 Kashmir is once again the scene of violence after security forces opened fire on protestors, leaving nine people dead and hundreds injured, including security forces.

The bloody events took place following a by-poll for the Srinagar Lok Sabha election on April 9 amidst a low-turnout and a boycott of the election by pro-independence protesters. The vote was for a vacant seat in the lower house of the Indian Parliament Lok Sabha, but many Kashmiris reject Indian rule over Kashmir and have been fighting for independence or a merger with Pakistan since 1989.

Indian forces have been accused of committing serious human rights violations in their efforts to quash the movement, and in the latest spike of violence, a video went viral that showed a Kashmiri protester tied to an Indian military jeep as a “human shield” (see Global Voices report).

The latest violence began on April 14, when day students of the Government Degree College in southern Kashmir's Pulwama town prevented an army armored vehicle from entering the college, which was chasing protesting students who object to the installation of a security checkpost near the college. The Twitter account Pulwama Updates tweeted footage of the students resisting, while referring to a recent encounter by security forces in Budgam, which killed three civilians and a militant.

When an army casper tried to enter the degree college Pulwama! #Kashmir pic.twitter.com/hkdiPtrKlF

The next day, security forces forcibly entered the college allegedly to detain some students. When the students protested by pelting stones at the security guards, they retaliated with pellets and tear gas, also indiscriminately beating the students, injuring more than 50 students.

A 17-year-old boy, Sajad Hussain Sheikh, was shot dead by the security forces the next day, which according to witnesses was an “unprovoked firing”, after a few stones were hurled at an armored car in Batamaloo, Srinagar.

The action on students triggered widespread protests in colleges and universities of different districts of the valley. The government responded by shutting all education institutes down to prevent the further spread. Many schools opened only last March after eight month of closure due to the unrest since last year.

This angered the students, and the Kashmir University Students Union, a banned student body, called for protests in all colleges and universities in Kashmir on April 17 condemning the police actions. When those protests came to fruition, at least 100 Kashmiri students were wounded during renewed clashes with security forces.

A day of protests by students has sent down shivers through the govt. Internet suspended, schools, colleges, universities closed #Kashmir

Where in the World are Student Protests crushed with Such Force & brutality , Pellets & tear gas shells rain today Many got injured #Kashmir pic.twitter.com/hO1mcGgRKG

#Kashmir See the Bravery & courage of the these Sister standing tall infront of the Trigger Happy forces ready to kill anytime. pic.twitter.com/vlY33lAvLe

The agitation by students lingers in Kashmir.

Students continued their protests for 6th consecutive day against use of brute force by #Indian troops on students in occupied #Kashmir.

The Indian government has enforced a 4G and 3G services ban in the Kashmir Valley since April 17. Video upload speeds via 2G Internet connections are typically very slow, thus preventing people from uploading videos on social media. The government is also considering to block social networking sites in Kashmir to stop the live streaming and spread of videos.

These are only the latest in a series of short and medium-term cuts to web sites and communication services in recent months. In 2016, the Software Freedom Law Centre counted 31 regional-level Internet shutdowns in India, 10 of which took place in the state of Jammu and Kashmir.

Mohammad Ashraf at Kashmir First blog explained why he thought this unprecedented violence has taken place during an election boycott:

There has been extensive physical intervention from the youth not only to prevent people from voting but even preventing the polling staff from discharging their duties. The violence and virtual mayhem during the polling for the Srinagar Parliamentary constituency in the three districts of Srinagar, Ganderbal and Budgam has been the worst ever seen in Kashmir during any elections held so far. [..]

(The) new generation of Kashmiri Youth, born and brought up in the conflict of the nineties of the last century are in no mood to compromise. Not only have they been brought up with the worst violence all around but have been subjected to continuous harassment right from the very start.

The perceived animosity toward Kashmiris by Indian nationalists also seems to be growing:

This is How #Kashmiri Students Are treated and Bullied by these Nationalist Goons. Are Kashmiri students Safe Outside Kashmir In india pic.twitter.com/aRZRlfeXpP

To curb casualties, the Indian government has asked paramilitary forces to use plastic bullets instead of pellet guns in the Kashmir region. But plastic bullets can still cause injury, and the pro-independence movement isn't giving up, so unfortunately there might be more violence on the horizon for Kashmir.