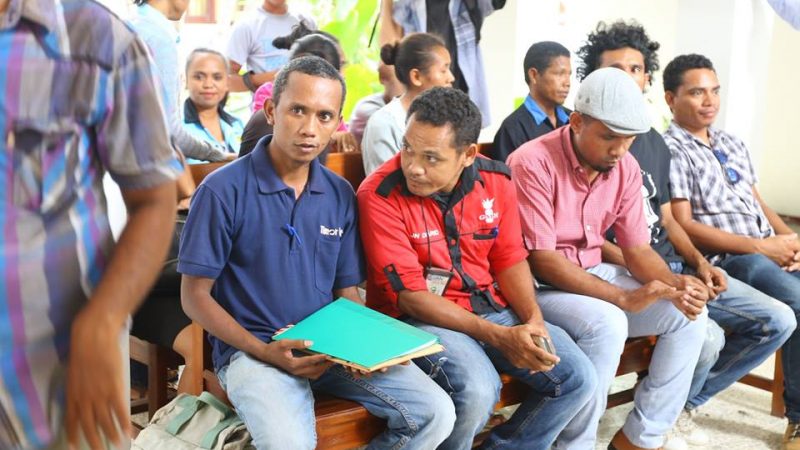 Journalists around the world are trying to get the prime minister of Timor-Leste (East Timor) to abandon a criminal complaint against two Timor-Post reporters who say he was involved in government corruption.

The International Federation of Journalists (IFJ) has launched an online petition calling on Prime Minister Rui Maria de Araujo to drop the complaint. If convicted, Raimundos Oki and Lourenco Martins could be sentenced to three years in prison and a high fine.

Earlier this year, Araujo said he wouldn't back down from pursuing the complaint, despite international support for Oki and Martins, whose trial was originally scheduled to begin on October 7, 2016. Due to technicalities, however, the trial has been rescheduled to begin on December 2.

Oki and Martins will face charges of “slanderous denunciation” for a story published nearly a year ago, on November 10, 2015, revealing corruption in state procurement contracts. Prime Minister Araujo, who previously served as a senior advisor in the Finance Ministry, was allegedly involved in one of the contracts in question—a government order for information-technology services.

A week after the article was published, Araujo held a press conference and announced his intention to “present the facts to the Prosecutor's Office of a publicly disseminated false accusation” against him. Two days later, on November 18, the prime minister formally submitted the complaint.

Several international media organizations, including IFJ, Freedom House, the Committee to Protect Journalists, and the South East Journalists Union, have called on Araujo to step back.

Araujo published an open letter in April responding to these groups and vowing to stick to his guns and push ahead with the case.

In July, the IFJ-Asia Pacific, the CPJ, and Freedom House again reached out to Araujo, arguing that the charges are “an attack on press freedom and the right to information in Timor-Leste,” saying “criminal prosecutions of journalists cannot be tolerated….as a matter of principle.”

Individual journalists from the Asia-Pacific region have also weighed in on the issue. Petrus Suryadi Sutrisno, a veteran Indonesian journalist with more than 40 years of experience, including working at the Suara Timor Timur Daily, says that Timor-Leste journalists must not follow the example of Indonesia and other countries by not checking and rechecking sources before publishing. He adds that publishing stories without following procedures can cause damage to both the media practitioners and the subject they're writing about:

Timor-Leste should learn either from Indonesia or from other countries by making a systematic observation and studying how media organizations can exist within the frame of “news engineering” and “orchestrated media” for real systematic character assassination to some one. First by publishing the news without ethic and check and recheck mechanism procedures hit the target then the law consequences are followed later. But what's most important is that the target now is the victim of defamation. The lawsuit is really the last straw.

I'm signing this Petition because the East Timor Prime Minister is still living with the spirit of the former Indonesian General Dictatorship.

I believe in Freedom of the Press & Freedom of Expression. This case brought by the PM of Timor Leste is all about silencing the media.

The IFJ petition is formally addressed to Prime Minister Araujo, along with Timor-Leste's minister of justice and general prosecutor. Supporters are encouraged to share the petition using the hashtag #FreeTimorJournalists.