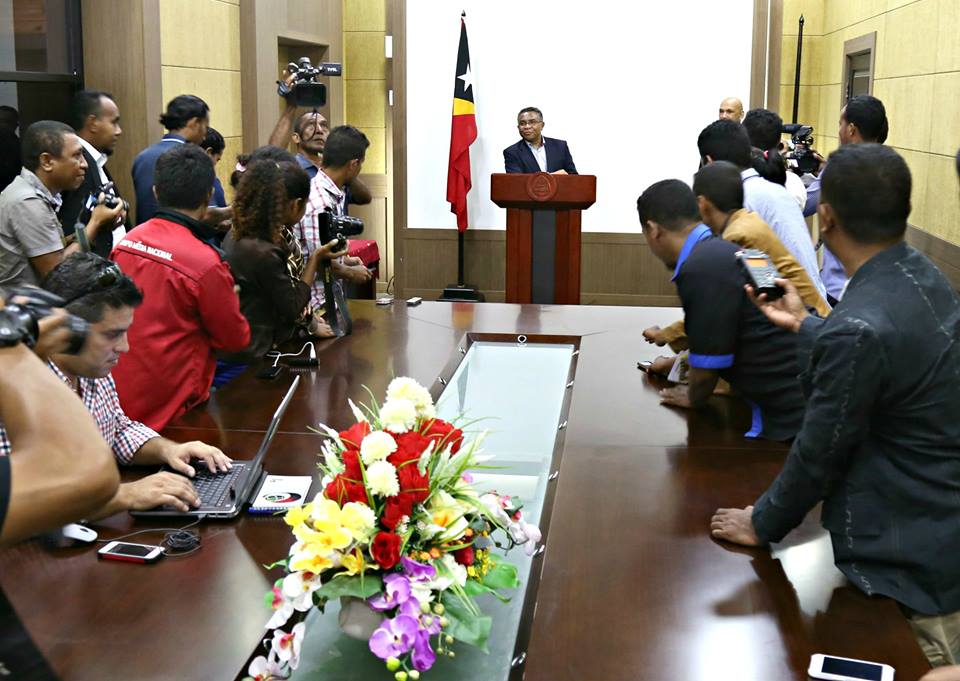 On April 22, 2016, several global media groups wrote a letter to Timor Leste Prime Minister Rui Maria de Araujo, urging him to withdraw the defamation case he filed against two local journalists. A week later, Araujo responded, defending his decision to pursue a case against the reporters.

This author got a copy of Araujo's letter, which addressed the concerns raised by global media groups. Araujo said he will not tolerate ‘press irresponsibility':

I will not trade press freedom and freedom of expression with ‘press irresponsibility’ and ‘irresponsible expression of freedom’.

The letter, signed by Committee to Protect Journalists, Freedom House, International Federation of Journalists, and Southeast Asia Journalist Unions, refers to the case of Raimundos Oki and Vicente Martins of the Timor Post newspaper. On November 10, 2015, Timor Post ran a story alleging corruption in a government tendering process. A few days later, the newspaper posted a correction and a reply from the office of the prime minister — a right protected by the country's press law — in relation to the story.

But Araujo, who was not satisfied with the correction published by the newspaper, filed a defamation case against Oki and Martins.

However, in the letter he gave to global media groups, Araujo asserted that what he filed was not a criminal defamation case, but merely the “presenting of facts to the prosecutor’s office of a publicly disseminated false accusation against me.”

Araujo insisted that he has a right to press charges against the journalists who he says made false accusations against him:

Can a journalist write, and newspapers publish these types of reports just because of press freedom and freedom of expression?

There was indeed a report by Timor Post on a press conference in which I denied the false accusations, and an apology was published mentioning ‘technical error’, but not a single word ‘correcting’ the patently baseless accusations.

He added that Timor Leste's press law guarantees the rights of journalists, but “not as a means of sanctioning any wrongdoing by journalists or publishing agencies.” 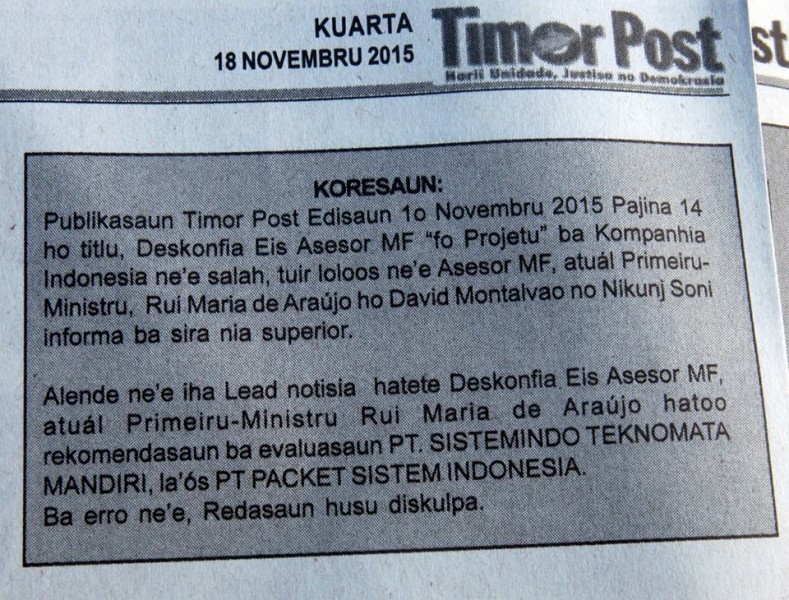 A copy of the correction published by Timor Post on November 8, 2015. Photo by Raimundos Oki, used with permission

Last April 11, the two respondents were summoned to appear in the prosecutor’s office. After probing the case, the prosecutor's office decided to charge the two journalists with ‘slanderous denunciation’.

[…] the prosecution believes that Raimundos Oki ‘after getting this information, did not verify the truth of this information nor confronted with the victim in order to get their version of the facts.’

[…] It did so in order to hit the honor, good name and reputation due to injured Rui de Araujo, well knowing that such rights are constitutionally protected and that the news did not correspond to the truth.

The letter from the global media groups was sent a few days before the celebration of World Press Freedom Day. It expressed concern about the impact of the defamation case on Timor Leste’s commitment to protect press freedom:

[…] the international media community is both disappointed and concerned that such an action is being pursued and strongly urge for you to unconditionally drop the charges and stop using legal threats to harass Timor Leste’s journalists.

[…] this defamation complaint against Oki and Martins threatens to significantly undermine press freedom in Timor Leste by engendering a culture of fear and intimidation among journalists who report on issues of national import.

Interviewed by this author about his case, Oki replied:

When escalated to a legal lawsuit, I have no fear because I am ready to take my responsibility for what I have done, because we already have obeyed everything by doing the correction and giving the right to reply.

Despite this case, Araujo, while addressing a group of journalists on May 3 during the World Press Freedom Day, affirmed Timor Leste’s adherence to freedom of speech and freedom of the press.