How a Stolen Student Parliament Is Macedonia's Political Crisis in Microcosm 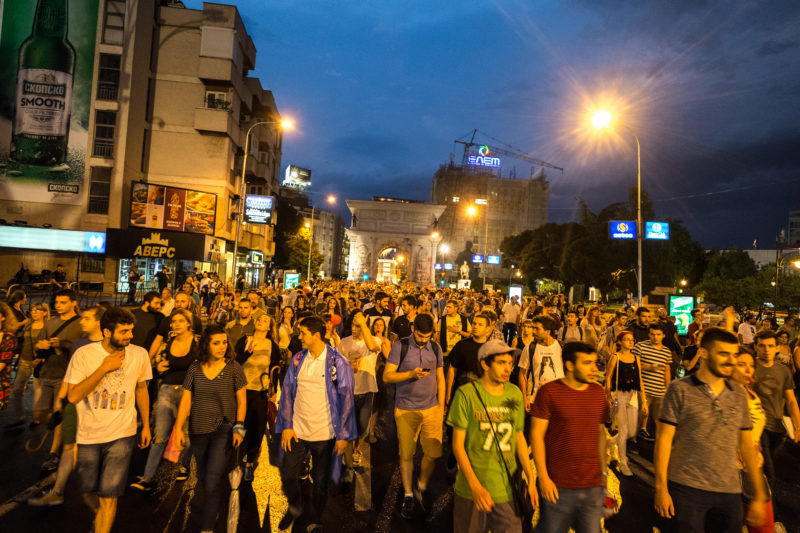 July 1 protest in Skopje, in support of demands of Student Plenum and other youth NGOs against election fraud. Photo by Vančo Džambaski, CC BY-NC-SA.

Placing illegitimate representatives in the university senate, having them vote, falsifying elections, violating the right to secret ballot, and excessive use of police force against students.

These are just some of the events that have stirred up a toxic political atmosphere connected to the student parliament of crisis-torn Macedonia's oldest public university in recent weeks.

The student parliament is a very influential institution in Macedonia.

Like elsewhere in the Balkans, it is an ‘heir’ to the former Communist “Student Union,” and has close ties with the ruling party.

By law it formally represents the students in official bodies and collects obligatory membership fees.

The lack of actual democratic accountability on the part of the Student Parliament of the University Ss. Cyril and Methodius (SPUCM), is well-known, however.

At the beginning of June, eleven student and youth organizations announced an initiative questioning its legitimacy, warning that it would compromise the process of electing a new rector at the university.

The initiative demanded a meeting with the university management to resolve the issue of the expired mandates of the SPUCM president and nine other student representatives within the senate.

The university leadership ignored the initiative, despite the fact elections within the SPUCM have been overdue for almost three years.

On June 27, the day of the election of the new rector, members of the initiative blocked the entrance to the rectorate building where the elections were to be held.

Most visible among them were the members of the grassroots Student Plenum, that organized massive protests and occupied public universities in 2014 and 2015, succeeding in averting government attempts to push through legislation that would reduce the autonomy of universities.

Members of the Professors’ Plenum joined the students and together they did not allow anyone to enter the rectorate.

Journalists and activists on the ground provided live streaming of the development which helped spread news about what was happening. 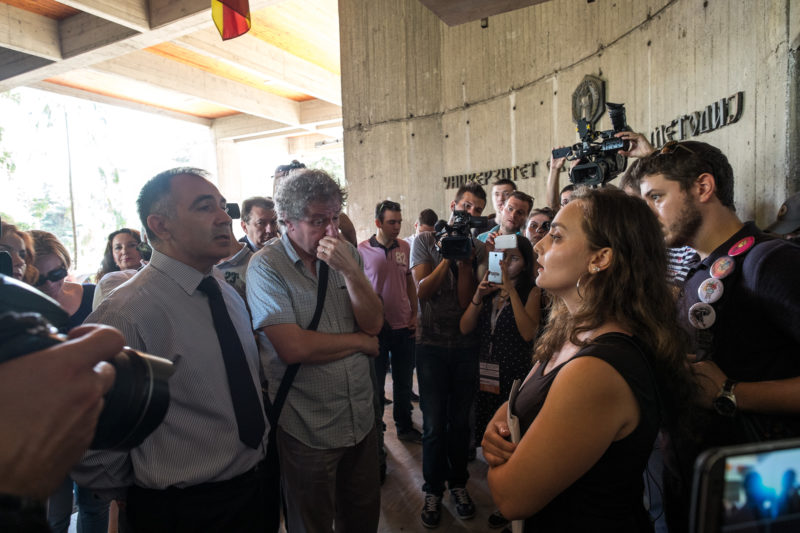 Students standing up to the rector. Photo by Vančo Džambaski, CC BY-NC-SA.

After negotiations, the outgoing Rector Velimir Stojkovski allowed four Student Plenum members to attend the session of the university senate, and students lifted the human shield.

During the session, these students warned the Senate that SPUCM members are illegitimate, submitting ample documentation in support of their argument.

The rector cut the discussion short, dismissed the evidence without examining it, and concluded that all relevant documentation had already been submitted.

Maja Stevanovikj, professor at the Faculty for Drama Arts, warned everyone of the dangers of going ahead with the elections.

If these people vote today, with illegitimate mandates, their vote will be disputed times and times over. In a year, or 6 months, when new information surfaces, the election will be disputed and it will have legal implications […] all of the decisions made by this University will have to be nullified.

Regardless of this warning, the verification commission verified the mandates of the 10 representatives of SPUCM.

With their votes, Nikola Jankulovski was elected as the new rector of the university.

On June 30, three days after the new Rector had been elected, SPUCM organised its long overdue student elections, which were plagued with violations and irregularities.

Firstly, there were no voting booths set up, thus the right to secret ballot was violated.

Secondly, there was no electoral commission and voters and ballots were not properly marked. Also, the elections were organised after the semester had finished and most students had gone home.

The most shocking moment occurred towards the end of the day, when several well-built individuals, whom social media users later identified as ruling party members employed in public administration, entered the university space and forcefully removed ballot boxes.

This was a clear violation of the procedure, which stipulates counting votes on site. The stolen boxes were given to Student Parliament members who ran away to their office.

After the ballot boxes were removed, activists and members of Student Plenum and other organizations arrived at the SPUCM offices and decided to wait for its president, Kiril Spirovski, to return.

They issued a call on social media for people to come and join them in front of SPUCM offices, and also called the police, reporting a robbery.

Some time after 11 pm, the Rapid Response Unit arrived in full riot gear with armored vehicles and escorted the SPUCM president and additional ballot boxes to the building.

By this time Student Plenum members were peacefully sitting in the entrance hallway.

After the attempt to bring the ballot boxes to the SPUCM offices, which plenum members protested, the Rapid Response Unit entered the building and started manhandling and even beating students, who were sitting still on the floor.

Aleksandra Zivkovic, a member of the Student Plenum, gave the following testimony soon after the incident:

I can't talk, I'm crying and I keep thinking about how they could do something like this to us. All of us, with high GPAs, knowledge, scientific articles and debates in our CVs, honest freedom activists, we were stomped on by a police unit whose job is to deal with terrorists!

Later that same evening, SPUCM announced that they had elected their new president, Davor Popovski, with 3,851 votes, while the second candidate Stefan Vasilevski received 1,275 votes.

They also reported that 138 ballots were invalid, while a total of 5,264 students had voted.

The following day, there were different reactions to the event.

The police claimed there was no excessive use of force and that their engagement was purely “preventative”, as there was a danger of students violating the Law on Public Order and Peace.

As a response to this and the incident itself, human rights expert and activist Mirjana Najchevska, PhD, wrote a facebook post, which was picked up by media outlets, where she stated:

Having someone put on a uniform does not make them a policeman. There has not been such an abuse from the side of the Ministry of Interior since Macedonia's establishment as a country, in the last century.

In addition to these statements, several other organisations, such as the National Youth Council of Macedonia, Highschool Students’ Plenum, Professors’ Plenum, the Youth Educational Forum and the Liberal Democratic Party of Macedonia criticized the excessive use of police force, demanding an investigation into the irregularities and nullification of the election results.

In his reaction, Velimir Stojkovski, still UCM rector at that point, expressed concern over the allegations of SPUCM and police involvement and asked for all students, whether SPUCM or Student Plenum, to refrain from any form of association “not to worsen the situation.”

Despite this, Student Plenum organised a protest on July 1, and demanded the elections be nullified, sending out official statements to the rectorate and all of the deans the University Sts. Cyril and Methodius.

The protest started in front of SPUCM offices, which were once again guarded by police, and ended on the grounds of the University.

I protest in front of SPUCM

The University must show courage and listen to the students’ demands.

As a response to the events of June 30, UCM Rector Velimir Stojkovski called for an emergency meeting.

During the meeting the Student Plenum submitted 2,000 pages of documentation once more underscoring the illegitimacy of SPUCM's mandate.

The Rector declared that a commission should be formed to review the evidence but refused to nullify the election, emphasizing the fact that the University has no jurisdiction over SPUCM.

Activist and student Vladimir Delov, in a July 7 post on Medium, explained why students need to boycott SPUCM and why these elections were so important.

He explained that the ruling party VMRO-DPMNE has spread its influence through SPUCM to university circles.

By doing this, during the past several years, SPUCM, with their votes, have helped elect professors according to the preferences of the party.

They are the ruling party's army in the university ranks. They prohibit students from voicing and solving their problems. Here, intermingling the party youth with student representation has very ominous implications.
We saw that falsifying elections was no trouble to them. Without shame, they do it as something normal, even something “cool.” They do it with pride. With muscle and golden chains, Rambo-vests within the faculties. Now try to imagine how this generation will organize parliamentary elections?

The University Sts. Cyril and Methodius consists of 23 faculties, 5 institutes, and 17 other bodies.

So far, only two of them, the Scientific Teaching Councils of the Faculty of Drama Arts and the Faculty of Dentistry, have stated officially that they do not accept the outcomes of the student elections or recognize the new SPUCM president as a legitimate representative.