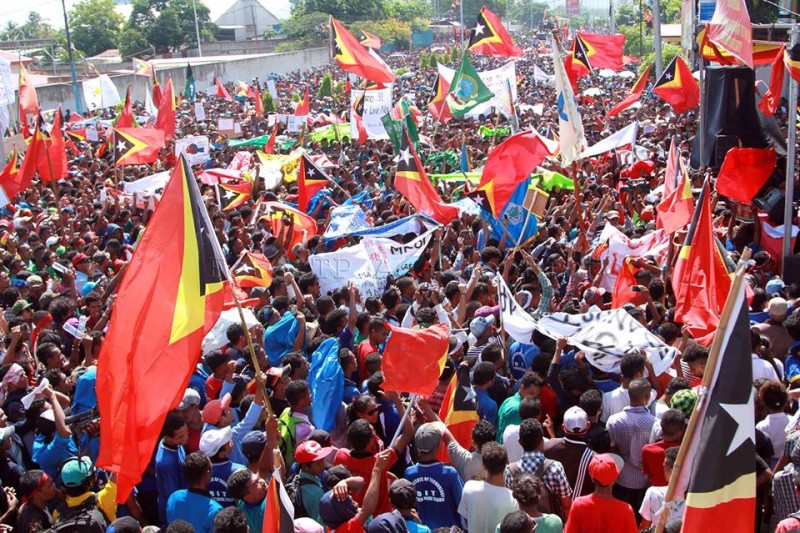 This is an edited article based on a story written by Dalia Kiakilir and published on Global Voices Portuguese.

More than 6,000 Timor-Leste citizens poured into the streets of the capital Dili on March 22 in protest against Australia's rejection of the demand of the Timorese government to return to the negotiating table in order to reset the median line delimiting the maritime boundaries between the two countries. An online protest was also launched to gather global support for Timor-Leste.

Timor-Leste was a colony of Portugal for 400 years. In 1975, it was invaded by Indonesia. The occupation ended in 1999 although it became an independent nation only in 2002. Australia is accused of expanding its maritime territories while Timor-Leste was still struggling for its independence.

While the maritime border issue persists, Australia continues to earn revenues from the natural resources of the Timor Sea.

For the people of Timor-Leste ensuring permanent maritime boundaries is a continuation of our long struggle for independence and full sovereignty. In fact, we ask nothing more than that to which we are entitled, in accordance with international law.

This video below shows the rally organized by the Movimentu Kontra Okupasaun Tasi Timor (Movement Against the Occupation of the Timor Sea or MKOTT):

The rally was also documented by the Audiovisual Archive Centre Max Stahl (CPA). It reported that many participants of the rally were veterans of the independence movement:

Meanwhile, the ETAN (East Timor Action Network) organized an online protest asking Internet users to share photos expressing support to Timor-Leste by using the following hashtags: #medianlinenow or #HandsOffTimorsOil. The protest quickly spread to many countries. Below are some examples of the solidarity protests across the globe: