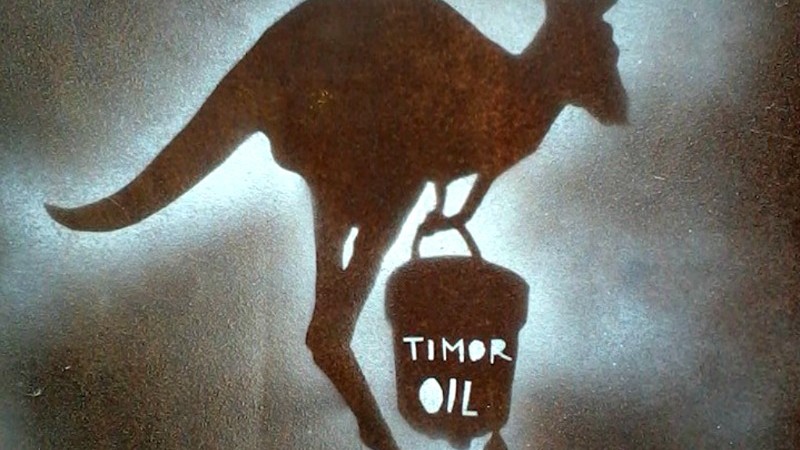 This is an edited article based on a story written by Manuel Ribeiro and published on Global Voices Portuguese.

Since 1963, Australia has been accused of stealing oil from its neighbor, Timor-Leste.

Timor-Leste was a colony of Portugal for 400 years. In 1975, it was occupied by Indonesia which lasted until 1999. After gaining its independence in 2002, Timor-Leste challenged the maritime boundaries declared by Australia which deprives the small nation the right to earn revenues from its oil and gas resources.

The Timor-Leste government is urging the Australian government to recognize the jurisdiction of the International Court of Justice and the United Nations Convention on the Law of the Sea (UNCLOS), and that it establishes its border on the midline between the two countries, as is referred in international law.

At stake are the offshore oil and gas reserves that exist in the “Greater Sunrise” region, located next to East Timor. So far, the Australian government has not shown any willingness to let go of these resources, valued at $40 billion, or to return to the negotiating table, despite the appeals by the Timorese authorities.

But Australia’s Labor Party seems to be open to the idea of reversing Australia's UNCLOS stance. Party spokesperson Tanya Plibersek has this to say about the issue:

In the case of Timor-Leste, [the Labor Party] is prepared to submit to binding arbitration in the Hague if the ‘good faith’ talks between the two states fails to find agreement. Australia regularly calls on other countries to abide by international norms and to settle disputes in line with the rules-based system. If we want to insist that other nations play by the rules, we also need to adhere to them.

Various civil society groups have also campaigned for a renegotiation in defining the maritime boundaries between Australia and Timor-Leste. One of these groups is the Movimentu Kontra Okupasaun Tasi Timor (Movement Against the Occupation of the Timor Sea or MKOTT), which was established in 2004 to find legal and diplomatic means to establish maritime borders between the two countries in a way that would be more fair for both parties in oil and gas revenues.

All of the contested oil & gas fields are on EastTimor's side of the median line ie closer to #Timor than Australia pic.twitter.com/Acgys830P8

During the visit of retired Australian military officer Peter Cosgrove in Timor-Leste last March 2 and 3, the MKOTT appealed for his help in persuading his government to stop the ‘illegal exploration’ and ‘exploitation’ of oil resources in the Timor Sea. Cosgrove is the current Governor General, a representative of the British crown in Australia. He is also considered a “friend” of Timor-Leste because he commanded the international peacekeeping force when Indonesia ended its occupation of Timor-Leste in 1999.

Below is an excerpt of MKOTT’s letter to Cosgrove:

(…) MKOTT would like to use the occasion of your visit to Timor-Leste to beseech you, as a historical friend of the people of Timor-Leste, to use your influence and ask the Australian government to: 1) Respect the sovereignty and dignity of the people and nation of Timor-Leste as they do and have done with other nations. 2) Revert to the maritime boundary dispute resolution mechanisms under the jurisdiction of the International Court of Justice and the International Tribunal on the Law of the Sea. 3) Focus negotiation “Honestly and Open” on maritime boundary and do not turn the subject into broader bilateral relationship. 4) Discontinue their use of now discredited “Continental Shelf” argument. 5) Stop using their considerable political and economic power to continue to rob Timor-Leste's people of their current and future wealth.

When Cosgrove visited Timor-Leste, to receive Timor-Leste's Grand Collar of the Order, the Timorese deputy of the CNRT (National Council of Timorese Resistance party) issued a statement about the maritime border issue which was published by the Australian press:

Australia took advantage of Timor-Leste's weakness and is now dodging its international obligations over the disputed marine border.

The exploitation of “Greater Sunrise” in the Timor Sea

The “greed” for the exploitation of Timor-Leste's resources dates back to 1963 when the Australian government issued a license for petroleum extraction to Woodside Petroleum, a company that had explored the mineral resources in the Timor Sea. In 1972, Australia agreed on a “very favorable” deal with President Suharto's regime in Indonesia that garnered a “broader maritime boundary closer to Indonesia,” thus obtaining access to more mineral resources — an agreement that Portugal rejected:

Portugal – then the administering colonial power in Timor-Leste – refused to join the negotiations, preferring to wait for the international process which, in 1982, resulted in the UN Convention on the Law of the Sea, or UNCLOS. Portugal’s decision created the “Timor Gap” in the Australian–Indonesian sea boundary.

From 1989 to 1999 Australia exploited Timor-Leste's offshore mineral resources “illegally by unilaterally recognizing the ‘de facto’ integration of [Timorese] territory into Indonesia and turning a blind eye to the atrocities and crimes committed against human rights,” as stated in an article published in Global Voices, by the researcher on Timor-Leste, Marisa Gonçalves.

Australia and Indonesia, in 1989, entered into an “agreement of cooperation on a 50/50 basis” to exploit the mineral resources of the Timor Gap, an agreement that Portugal rejected and “challenged…in the International Court of Justice, but the action lapsed in the face of Indonesia's refusal to recognize the court's jurisdiction,” explains Michael Leach, professor and researcher of politics at Swinburne University in Melbourne.

The “Timor Sea Justice Campaign” is organizing a series of protests that will take place in several Australian cities during the week of March 21. The Australian embassies in Jakarta, Indonesia, and in Dili, Timor-Leste, will also be targets of protests. The aim is to seek public support in Australia in pressuring the government to reconsider its maritime claims that overlaps in the territory of Timor-Leste.