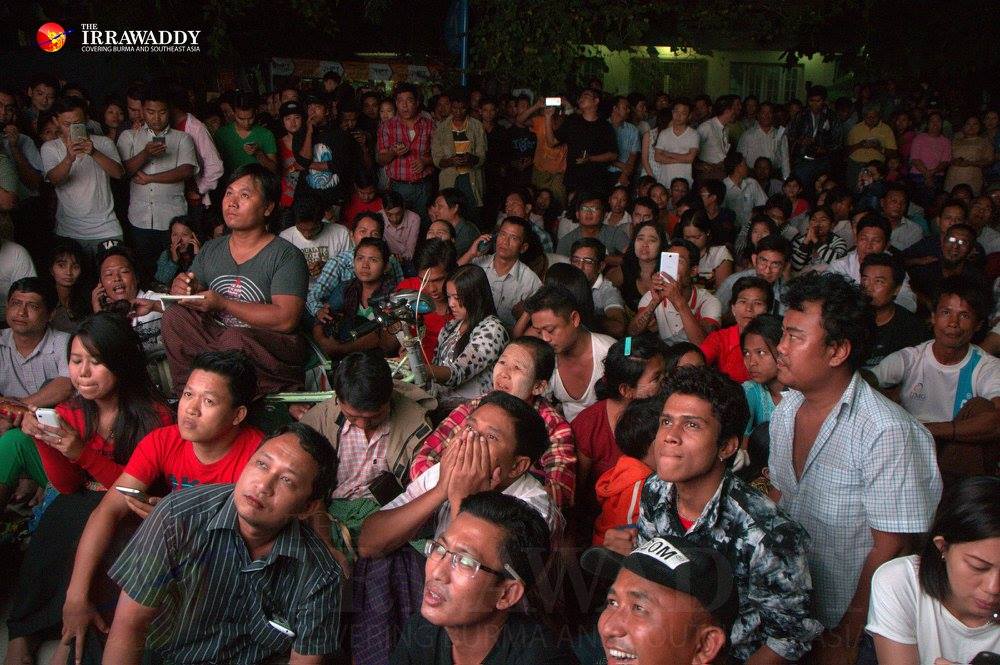 Citizens earnestly wait and watch the live ballot counting in front of the office of the opposition party. Photo by Irrawaddy shared on Facebook.

Despite some reported irregularities, Myanmar succeeded in holding a peaceful general election on November 8. A total of 91 political and ethnic parties participated in the election. The current ruling party, Union Solidarity and Development Party (USDP), is led by the President Thein Sein; while the opposition party, National League for Democracy (NLD), is headed by Nobel Peace Laureate Aung San Suu Kyi.

Regardless of the election results, 25 percent of the seats in Parliament are reserved for the military. This is based on the 2008 constitution drafted by the army to ensure that it continues to wield influence in the civilian government. Furthermore, Aung San Suu Kyi is constitutionally barred from becoming president even if her party wins majority of the votes because she was married to a foreigner and she has foreign children.

Although it is technically Myanmar's second general election, many consider the November 8 event as the country's first free and fair election.

Myanmar was under a military's dictatorship for 50 years. In the 1990 election, Aung San Suu Kyi's party won with a landslide victory but the military ignored the results and took control of the government. In 2010, the government allowed some political reforms like the holding of election although it was accused of rigging the results.

Some of the issues that marred the pre-election campaigning include the reported massive errors in the voters’ list, disenfranchisement of some ethnic groups like the Muslim-dominated Rohingya, and the perceived biases or flaws of the election commission. Despite these challenges, many citizens continued to believe in the promise of the November 8 election to promote change in society.

Many people used slogans such as အသဲကြားက မဲတပြား (A Ballot From Our Heart) and ပြောင်းလဲချိန်တန်ပြီ (Time to Change) which reflected the popular sentiment about the general election.

Below are some of the observations shared by voters during election day on various social media platforms.

Some people lined up as early as 4 a.m. even though polling stations didn't open until 6 a.m.

The very first 10 people went into the voting station. Now I am the first in line. #MyanmarElection #Myanmarvotes pic.twitter.com/HlR1FZSdGG

Many people posted photos of their ink-stained fingers to show that they had voted. Blogger Ei Myat Noe Khin shared her thoughts about the significance of the day:

Well, for the rest of people, Nov 8th would be just an another Sunday, hanging out with friends, and do stuff but for us, Myanmar citizens who are going to vote, it’s not just another day

Kenneth Wong explained what this symbol could stand for:

My Burmese friends who have voted are proudly sharing photos of their ink-stained fingers — proof of casting a vote. You might say, today the Burmese people give the old regime the finger!

Activist Khin Ohmar noted that many people complained about not finding their names on the voters’ list, while some people testified about receiving multiple voter approval cards. She also read some news that the ruling party is leading in the army constituencies.

Respect those who are on duty at the polling station. Some of them have not even eaten the whole day. Salute their patience working for change. 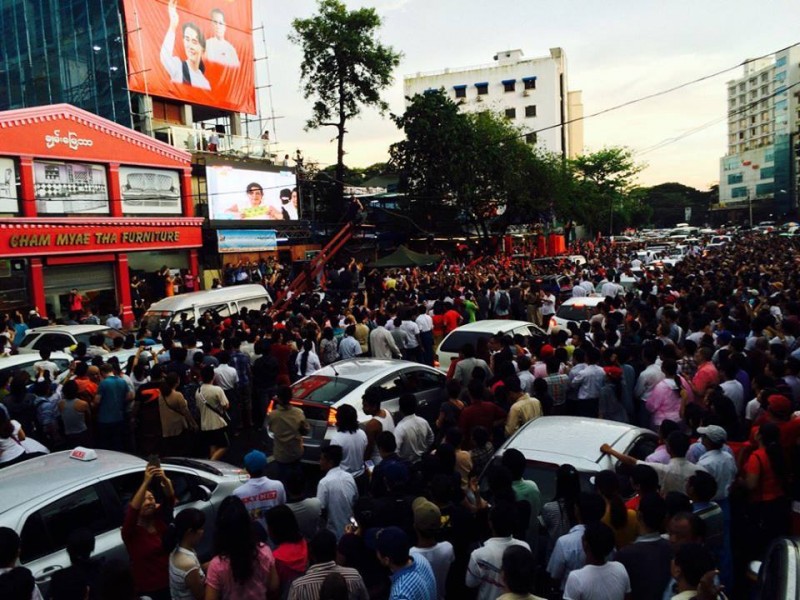 A crowd gathers in front of the NLD office in Mandalay to watch the live counting of ballots. Photo shared by Nik Nayman on Facebook.

5,000 pre-votes arrived out of nowhere in an election commission office in Loikaw. Where it came from is quite blurred. Fighting other representatives and whoever in charge there!

The arrival of ‘advanced’ votes took place in several areas across the country. This news worried the public and electoral watchdogs. Burma Partnership, a network of democracy and human rights advocacy organizations, monitored that the suspicious votes benefited the ruling party:

In Myitkyina around midnight, advance votes arrived, which were mostly for USDP. The same situation with the arrival of advance votes in Monywa, Lashio, Taunggyi. In remote and ethnic areas where it is strategic for the Burma Army, it seems they will not allow the NLD or ethnic opposition party to win.

But surprisingly, the opposition is not objecting: