The struggle to maintain an independent russophone voice in Moldova

Newsmaker was created to fill a linguistic niche 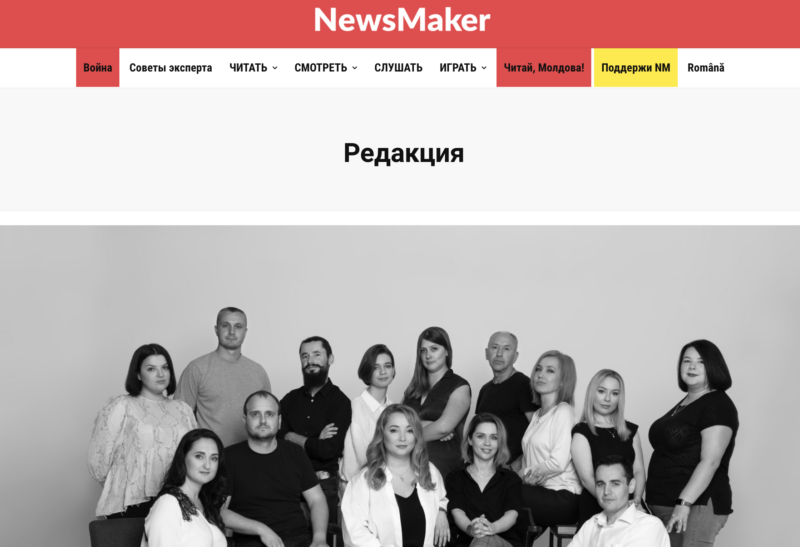 A screenshot from Newsmaker webpage showing the composition of their newsroom.

In Moldova, both Romanian and the official language, Russian are crucial tools for communication — particularly for the local media. Global Voices interviewed Gala Vasilieva, the editor-in-chief of Newsmaker, a Russian-language media platform, primarily aimed at the Russophone population of the country, to understand how Russia's war in Ukraine is affecting media consumption in Moldova. The interview was conducted in Chișinău in Russian.

Global Voices (GV): How has the war affected Moldova's politics and the media landscape?

Gala Vasilieva: For the first time in years, we have a pro-European, right-leaning and non-coalition government that has stated its position clearly: It condemns Russia's invasion of Ukraine, and does all it can as a small country squeezed between Romania, Ukraine, and a border with Transnistria [A self-declared republic that controls 12 percent of Moldova, and is backed y Moscow but not recognized internationally]. As the war started in Ukraine in February, there was a huge wave of refugees, and we witnessed unprecedented solidarity: Moldovans offered housing, food, and transportation. There was also a huge interest in information about Ukraine. Later, we also saw anti-refugee hate speech campaigns on social media that eventually infiltrated the general media discourse. As a matter of fact, we conducted an investigation about those videos accusing Ukrainian refugees of being ungrateful, and discovered that some of the people making those videos were definitely not from Moldova. We know this because of specific terms they used in Russian in those videos that we don't use here. I have to say that this campaign was successful mostly in areas where people tend to consume media coming from Russia.

As Vasilieva explains, one of the main concerns affecting Moldovan society at large is inflation:

Vasilieva: About 40 percent of people in Moldova justify, to various degrees, Russia's aggression. One of the reasons for such a high figure is the socioeconomic challenge people face here with a 30 percent inflation and jumping energy prices. People blame this inflation rate on the current Moldovan government, and namely on Chișinău ‘s agenda to join the European Union. But in reality inflation is caused mostly by the war, something many refuse to admit, or even consider. People look at Ukraine where the government has put a cap on gas prices, and conclude that, if gas is expensive in Moldova, it is the fault of the government, thus it is better to prioritize relations with Russia for the future.

Another line of fracture, as she details, is the linguistic divide. Newsmaker was created to fill this empty niche:

Vasilieva: There are people in Moldova who do not understand Romanian, for them Russian is the gateway to information consumption, mostly through television and the internet. Our ethnic minorities speak predominantly Russian, so do people in Transnistria, yet our government does not have an adequate policy to integrate them, to offer quality teaching of Romanian.  We get into absurd situations when support for teaching Romanian, as for example in Gagauzia [region on Moldova inhabited predominantly by Gagauz, a Turkic and often russophone ethnic group], comes not from our own government, but from grants by foreign donors!

This is why Newsmaker was established, initially in Russian only, because we wanted to have a truly independent source in Russian that would not engage in propaganda. Interestingly, we did a survey and found that half of our audience are native speakers of Romanian, yet they read us because we provide something quite rare in Moldova: analytical content. Based on this, we decided to create a Romanian edition, but the russophone part remains the most read one. The problem in Moldova is not a lack of freedom of expression, unlike what is happening in Russia, but the lack of media literacy. Television content is monitored by different state organs and TV stations are penalized when they break the law, but the internet is free to produce and disseminate anything.

Today, people in Transnistria read us a lot because most of them don't speak Romanian, besides Newsmaker has a special focus on this region and on Gagauzia, so we become de facto the only source of information about Moldova overall in Russian. We also know that people in Transnistria copy our material and share it in groups of Viber, a messenger that is very popular in this region. Within Russia, our website is blocked unless you have a VPN and in Transnistria all media is government-controlled.

But while much needed, Newsmaker is facing a difficult time as a result of the war, remarks its editor-in-chief

Vasilieva: We are a commercial media and we display on our webpage the names of those who support us: grants mostly from Moldovan and foreign organizations. We used to have 20 percent of our budget covered by advertising, but since the beginning of the war, that segment dropped to 10 percent. We don't publish content that is in fact disguised advertizing or lobbying, unlike what is widely practiced in other Moldovan media. Besides, our competitor is the Russian Sputnik [a pro-Kremlin multilingual media platform operating out of Moscow that has been blocked since February 2022] that has a giant budget compared to what we can afford, and who can pay well, and has access to top technology.

We have protests led by populist politician and businessman Ilan Shor who has openly declared he pays transportation to the capital and food to those who agree to protest under his banner in front of the government's office. Those protests actually reveal the extent of poverty in Moldova: many people might earn as little as 200 US dollars monthly, and yet can make US dollars 20 per day if they participate in the protest. They do this out of desperation.

At the beginning of the war, people did pack suitcases in case they had to flee. Many still have those suitcases on the ready, and are now replacing summer clothes with winter clothes in case the war in Ukraine escalates and reaches Moldova. Some also await for Russia to come as “liberators.” In the end it will all depends on how the war unfolds in Ukraine. People are tired: we had the pandemic, now a war at the border, and prices of gas are going up. If power cuts happen in winter,  we don't know how people will react. 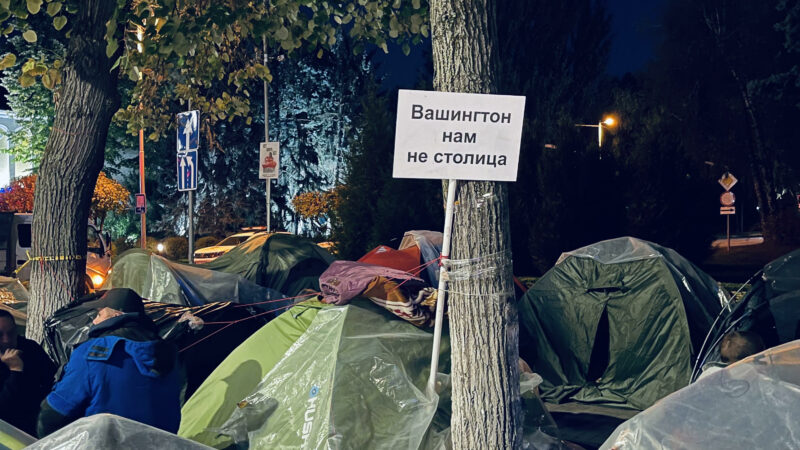