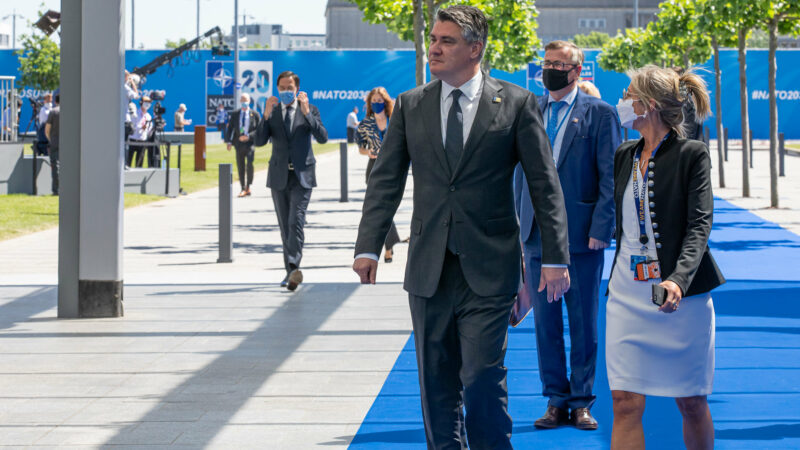 The Croatian politician mostl vocally fighting for the cause of the Croat extremists in Bosnia is the country's president, Zoran Milanović. Photo by NATO, CC BY-NC-ND 2.0.

In the last year or so, the Balkans have seen an unprecedented diplomatic offensive by Croatia and Croat ultranationalists in Bosnia and Herzegovina (BiH) and abroad. The ultimate goal is to make sure that a highly controversial and discriminatory electoral reform is passed.

According to most Bosnians knowledgeable on the subject, as well as a range of Balkan specialists, these reforms would cement the hold of the Croatian Democratic Union (HDZ-BiH) on power in Bosnia and Herzegovina, further dividing the country and disenfranchising a large number of its population, most notably the country's Roma and Jewish minorities.

While Dragan Čović, the leader of HDZ-BiH and the party's top echelon have paid lip service to the country's sovereignty, along with the leadership of Croatia, activists close to the party, Croat ultranationalists in BiH, Croatia and abroad show a clear disdain for the Bosnian state. They make no secret of the fact that their ultimate goal is a union with Croatia and the restoration of the criminal para-state “Herceg-Bosna.” Most Bosnians who oppose the reforms view them as the first step towards achieving peacefully what Croat extremists failed to achieve during the 1992-1995 war.

Defeated on the battlefield by the Bosnian Army in 1993-94, its leadership both military and political was subsequently tried by the International Criminal Tribunal for former Yugoslavia (ICTY) for crimes against humanity, violations of the laws or customs of war, and grave breaches of the Geneva Conventions. The ICTY found that the Bosnian Croat leadership working together with the leadership of Croatia wanted to establish an ethnically pure Croat state. After the death of Croatian president Franjo Tuđman in 2000, his successor Stjepan Mesić handed over a large trove of secret recordings to the investigators at the ICTY in which Tuđman talks openly about covering up war crimes in BiH, plans to carve up the country and his close ties to Slobodan Milošević.

Croatia's predatory behavior towards Bosnia and Herzegovina has been largely overlooked in international media. Ever since becoming a member of the EU and NATO, the country and its politicians have been much more vocal in their support for Croat extremists in Bosnia and have openly used their membership to exert pressure on the EU and the United States in order to give the extremists what they want. They have mostly been successful as Bosnian politicians who oppose the electoral reform laws have said openly that both EU diplomats and those from the US State Department have tried to cajole them into acquiescence. Considerable pressure has also been put on the EU's High Representative in Bosnia to change the laws favoring HDZ and the Croat extremists.

Croat extremists also scored what at first appeared to be another diplomatic victory in early August, as the Israeli embassy in Tirana, Albania (which is also responsible for BiH) came out in favor of “electoral reforms.” This was most likely the result of a visit to Israel by HDZ-BiH leader Dragan Čović and the Bosnian Serb strongman, Milorad Dodik. Their belief is most likely that Israel would be able to put more pressure on the US and the EU, and most importantly, Germany. The EU's High Representative in BiH is German.

However, after an online backlash and several articles in Israeli media, Israel reprimanded its then ambassador to Albania and Bosnia, Noah Gal Gendler, for intervening in Bosnian politics. According to Haaretz:

“Yair Lapid who serves both as Israeli Prime Minister and Foreign Minister called the Ambassador’s actions a “new nadir for Israeli diplomacy,” and ordered that he be censured.”

The irony of the Israeli ambassador's actions in favor of forces that often celebrate the legacy of perpetrators of the Holocaust during World War II and the cynicism of those involved in this endeavor is simply breathtaking.

In June, Croat extremists demolished the old Partisan cemetery in Mostar, dedicated to anti-fascists murdered during World War II. The cemetery, which has been vandalized several times since the Bosnian war, lies on a hill overlooking the western side of Mostar, a predominantly Croat part of the town, easily accessible to Croat extremists.

Partisan graveyard in Mostar has been desecrated again. The damage is the biggest so far, over 700 memorial plaques commemorating fallen Second World War fighters had been destroyed. Photos by Dragan Markovina (©)

A large number of the anti-fascists commemorated there had been murdered by the Ustaše, the military wing of Ante Pavelić's so-called “Independent State of Croatia” (NDH), a Nazi puppet state, responsible, among other things, for rounding up and deporting Bosnian Jews to the Jasenovac-Stara Gradiška concentration camp.

Nazi leader Adolf Hitler meets Ante Pavelić, leader of the “Independent State of Croatia” (NDH), upon his arrival at the Berghof in Bavaria, Germany in 1941. Public domain photo from the archive of the United States Holocaust Memorial Museum (Photograph #85432), via Wikipedia.

Croat extremists are not shy about celebrating the legacy of the NDH. This includes streets in the western part of Mostar being named after NDH's chief ideologue Mile Budak, as well as Ustaša commanders Jure Francetić and Rafael Boban, and others. For years, calls to change the street names have been blocked by Dragan Čović and HDZ-BiH, until this July, shortly after Čović´s visit to Israel. The decision was clearly made to placate Israel and was also mentioned by the former Israeli ambassador to Albania and Bosnia as the reason for his support for the electoral reform.

It should also be noted that the streets were re-named after these prominent NDH and Ustaše figures during the Bosnian war by Croat extremists like Mate Boban, president of the para-state “Herceg-Bosna” and war-time president of HDZ-BiH and convicted war criminal Bruno Stojić.

The Croatian politician most vocally fighting for the cause of the Croat extremists in Bosnia is the country's president Zoran Milanović. During the past year, he has promised to veto Finland's and Sweden's admittance into NATO until the election laws favoring HDZ-BiH and Croat extremists are passed. He also said BiH will never be a part of NATO until the election laws are changed and that Croatia will not permit BiH to become part of NATO.

During a meeting of Western Balkans leaders in Slovenia two weeks ago, Milanović also called into question the truth of the Srebenica genocide.

Most recently he called for Croatian soldiers to be part of Operation Althea, part of the EU's military deployment in BiH to oversee the military implementation of the Dayton Agreement. Milanović was quoted as saying: “We will always fight for the protection of Croats in BiH. We will insist that Croatia sends its soldiers as part of the Althea operation to BiH, under the auspices of NATO or the European Union (EU). We will decide on that, not Sarajevo, not Belgrade. A new time has come in Croatian politics.”

This drew reactions from Bosnian politicians and diplomats, including Željko Komšić, himself an ethnic Croat and member of the Bosnian presidency. He was quoted as saying “that it was unacceptable for us that Croatia, a country that was involved in fighting during the Bosnian war should have troops present as part of an EU mission.”

Serious concerns about the intention of Croatia’s President to send Croatian troops to Bosnia and Herzegovina, as a part of the Althea EUFOR/NATO mission to Bosnia & Herzegovina, while at the same time denying the Genocide committed in Srebrenica. pic.twitter.com/hI6QQ3C5ZT

While the reactions are welcome, there are many more reasons for not wanting the Croatian military on Bosnian soil, given the fact that Croatia has been using its influence for years as an EU and NATO member to destabilize Bosnia and Herzegovina. There is much more to complain about than just Croatia's wartime role and Zoran Milanovićs's genocide denial. Bosnian politicians and diplomats need to be crystal clear about Croatia's malign influence.