The Old Bridge in Mostar was reconstructed in 2004. Photo from 2019 by Wikipedia user Bernard Gagnon, CC BY-SA 4.0.

The recent controversial visit to the Bosnian city of Mostar by Croatian President Zoran Milanović was just another reminder of the toxic relationship Croatia has with Bosnia and Herzegovina.

To most commentators in Bosnia and Herzegovina and experts on the country, the policies enacted by Croatia towards Bosnia and Herzegovina are an echo of the policies of late Croatian president Franjo Tuđman that ended with the entire top echelon of Bosnian Croat political and military leadership, the so-called Herceg-Bosna Six, being convicted by the International Criminal Tribunal for Yugoslavia (ICTY) for crimes against humanity, violations of the laws or customs of war, and grave breaches of the Geneva Conventions  committed between 1992 and 1994.

The most memorable part of the trials against the six men was the 2017 suicide of general Slobodan Praljak during live coverage of his trial in the Hague. Praljak led the destruction of parts of Mostar, including the world-famous Old Bridge, a UNESCO World Heritage Site.

When it comes to Mostar, the ICTY concluded that the HVO used extreme violence during the deportation of Bosniaks from parts of the city it claimed as its own while unleashing intensive and constant shelling on other parts of the city, killing a huge number of civilians. The ICTY also concluded that the HVO had established a network of prison camps for non-Croats, where the prisoners were subjected to “inhumane treatment and physical and psychological abuse, including beatings and sexual assaults. Some were used as forced laborers on the front lines, which resulted in the death or injury of a number of them.” The end goal of HVO's actions was the removal of Bosniaks and other non-Croats from a Croat para-state, the so-called “Herceg-Bosna” that was later to be either incorporated into a “Greater Croatia” or closely linked to it.

A string of counter-offensives by the Bosnian Army in the spring, summer and fall of 1993 led to a collapse of Croat forces, with many arguing that it was the 1994 Washington Agreement that saved the Croats from being completely overrun.

The testimony of Nura Pezer about the brutal murder of her husband Šefik and son Ahmed, who were killed by soldiers of the Croatian Defense Council on April 16, 1993 in the village of Ahmići. #BosnianGenocide pic.twitter.com/I4MYQSKgBH

Croatian President Milanović didn't mention any of these things on his visit to Mostar and, unlike Serbia, Croatia's predatory behavior towards Bosnia and Herzegovina has not received the attention it deserves. There are several reasons for that, the principal being that, like Bosnia and Herzegovina, Croatia was a target of the bloody Greater Serbian expansionism. However, Tuđman's regime eagerly collaborated with Slobodan Milošević when it came to trying to violently partition Bosnia and Herzegovina. 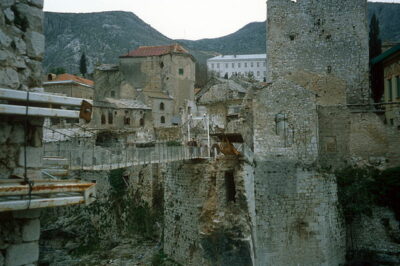 After HVO destroyed the Mostar Old Bridge in 1993, a temporary cable bridge was used. Photo from 1997 by Wikipedia user Npatm, (CC BY-SA 3.0).

The collaboration between Bosnian Serb and Bosnian Croat leaders during the Bosnian war is also well documented. It wasn't until the collapse of Croat forces in Bosnia and Herzegovina as well as threats of sanctions from Washington that Franjo Tuđman temporarily at least turned his back on Milošević and resumed his collaboration with the Bosnian government against the common enemy.

After Tuđman died, Croatian leaders, most notably Stejpan Mesić, tried to undo some of the damage done by Tuđman and his cronies.

Unfortunately, with Croatia joining the EU and NATO and the fact that many Bosnian Croats have dual Bosnian-Croatian citizenship and can vote in elections in Croatia, politicians trying to win votes among hardline Croat nationalists in Bosnia, Croatia and hardliners in the diaspora, have for years lobbied on behalf of Croat nationalists both with EU officials and in the United States. Croat nationalists have also found a solid ally in Bosnian Serb strongman Milorad Dodik who along with HDZ-BiH's Dragan Čović have for years tried to dismantle state institutions or prevent them from functioning until they get what they want.

Dragan Čović has also, with the help of Milorad Dodik cultivated solid ties to Moscow over the years. On one hand, you have the Croatian government lobbying for Croat nationalists in the EU and the US, and on the other, both Dodik and Čović making overtures to Putin.

The reason both Bosnian Serb and Croat nationalist leaders have gravitated toward Moscow is simple: Putin has a clear interest in countering EU and NATO influence in the Western Balkans, above all, to make sure no more Balkan countries join the alliance.

In order to do that, Moscow supports corrupt strongmen who ensure that the key reforms needed for an eventual Bosnian EU and NATO membership are not met, while causing chaos in the country, fomenting ethnic hatred, engaging in genocide denial, glorification of war criminals, eroding the rule of law, blocking the work of state institutions, and threatening secession with the ultimate goal of keeping the country permanently destabilized and that way making sure they consolidate their grip on power and avoid eventual blowback for their criminal behavior.

One thing is absolutely clear: if Bosnia and Herzegovina enacts reforms similar to those of other liberal democracies both in Western Europe and the rest of the world, including an election system with one man, one vote, or something similar, in the long run, it would mean the end of both Milorad Dodik and Dragan Čović and his Croatian Democratic Union (HDZ-BiH), and they know this.

Both Moscow, as well as Serb and Croat nationalist leaders, benefit from the status quo, though it's clear that the Bosnian Croat leader Čović is in a much more precarious position than Dodik, as the elections in 2018 showed. That's why Čović and his party have made a push during talks on election reformers to make sure that their hold on power in Bosnia and Herzegovina is locked in despite only having achieved 9 percent of the vote during the last elections.

Čović and HDZ BiH owe their hold on power to the Dayton agreement which helped end the Bosnian War 27 years ago. However, almost three decades later, it's clear that Bosnia and Herzegovina is ready to move on and Dayton is part of the problem. As Balkan historian, Marko Attila Hoare wrote on Twitter recently:

The Dayton system is a prison in which the international community keeps the Bosnian people, denying them the sovereignty due every free people. Bosnia's predatory neighbours, Croatia and Serbia, are the prison wardens. ‘Electoral reform’ is an attempt to tighten Bosnia's chains.

Bosnia and Herzegovina with a population of 3.2 million has three presidents, two entities (the Federation of Bosnia and Herzegovina and Republika Srpska), 10 cantons, 13 prime ministers and hundreds of lawmakers. On top of all that, it is dangerously exposed to the whims of Serb and Croat nationalists who can block any decision that does not favor them. The system also excludes minorities like Roma and Jews from running for the presidency.

The recent talks about election reforms have also confirmed what many Bosnians have been saying for years: the EU is content with the status quo and is willing to give both Dragan Čović and Milorad Dodik everything they ask for in order to keep the situation from “escalating.” Both men are aware of that and keep escalating precisely because they know the EU will acquiesce to their demands. In a situation like that, the only thing left to do for those who genuinely care about the future and sovereignty of Bosnia and Herzegovina is to push back against both Dodik and Čović and the internationals that appease the two men.