A new era of politics begins in Sri Lanka

Constant vigilance of the people is the only way forward 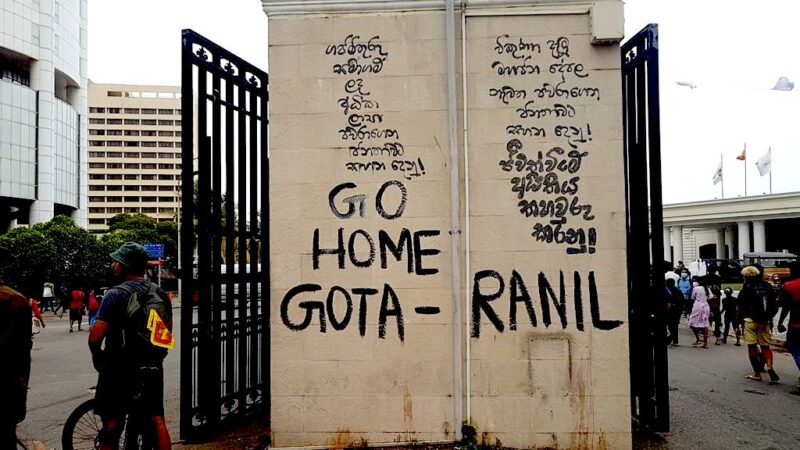 Entrance to the presidential residence and the central bank, a former ‘high security zone,’ now bears the mark of the demands of the protesters. Image by Amalini via Twitter, used with permission.

A peaceful mass uprising on July 9, 2022, brought about the end of a political era that started with the promulgation of the 1978 constitution of Sri Lanka, a constitution that completely undermined democracy, the rule of law and human rights in the country. During a period of continuous protests over three months, the people demanded the resignation of President Gotabaya Rajapaksa. However, he repeatedly refused to comply, claiming that he had been elected by an overwhelming majority of the people. The exasperated people gave the president an ultimatum to resign by July 9. Vast numbers of people from all over the country gathered at the president’s official residence and occupied it as well as the secretariat building. As a result of this clear demonstration of extreme dissatisfaction with his family’s greed and his own incompetence, which brought about a complete breakdown of the economy, the president finally agreed to resign on July 13. His decision has been communicated to the speaker of parliament. The prime minister has also offered his resignation.

We will later learn the details of how a new administration will be established. However, we also need to maintain our focus on the long-term changes that are required. There are several fundamentals that need to be considered if we are to resolve the structural problems that have been inherited as a result of the introduction of the 1978 constitution. For all practical purposes, this constitution is a dead letter. However, it needs to be formally abolished by employing a process that involves the full participation of the people. We need to enact a constitution that is based on the principles of the rule of law, democracy and respect for human rights; these basic principles are the essential foundation and framework for building new structures of government and reforming public institutions. Given the systemic theft of the country’s and people’s resources and wealth by a small number of families, in order to decisively end corruption and the abuse of power, the most urgent need is the establishment of a comprehensive legal framework, with structural checks and balances, as well as clear and open accountability.

Without a clear, comprehensive and enforceable law to stop corruption, there will be no fundamental change in the functioning of the state. The establishment of a functional state is an essential pre-condition for resolving the problems associated with the complete collapse of the economy that resulted from the debt crisis. Ridding the country of corruption is an essential condition for the creation of a stable political system, which could provide the requisite leadership to resolve the current economic and long-lasting social problems. Only then will the government be in a position to provide for the full welfare of all the people. 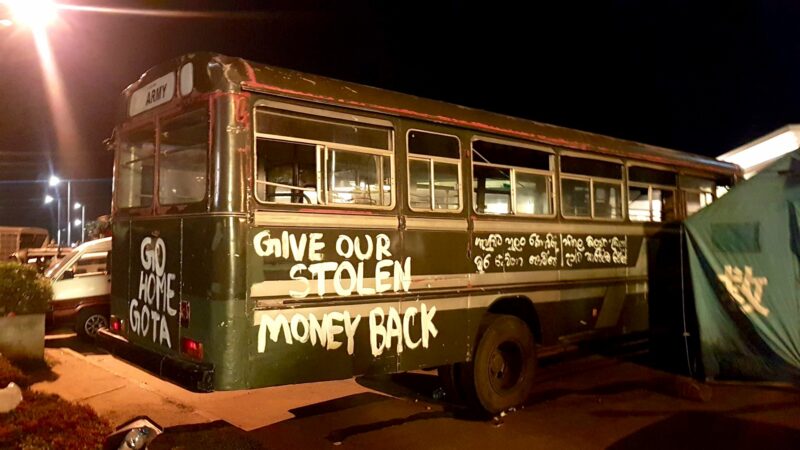 A stable political system can only be built and maintained on the basis of an effective system of administration of justice. This necessarily involves the reform of the police, particularly the investigative branches of the police, by bringing the Attorney General’s Department under the rule of law and removing obstacles to the independence of the judiciary. This requires the strict enforcement of laws relating to non-interference with the administration of justice.

In the present circumstances, parliament should give priority to the necessary legislative changes, including making the requisite budgetary allocations, to achieve these changes. Given the present desperate financial crisis, every higher-income individual should agree to contribute their fair share in taxes to bring about economic and political stability.

The establishment of a credible political system that can eliminate systemic corruption and provide full accountability is essential to obtaining the cooperation and support of all Sri Lankans, including those currently living outside the country. Once those systems are in place and effectively operating, Sri Lankans living abroad will be more prepared to contribute to dealing with the dollar crisis and thus resolve many of the hardships that people face.

Without such an overall change to the political system, it will not be possible to win the cooperation and support of the masses of people who have taken to the streets and also others who are unwilling to contribute financially for the lack of confidence in the political system. Obtaining the support of international agencies and other governments will also depend on these measures that need to be taken to ensure true political stability.

The attack on the media people covering the siege at the prime minister’s residence needs to be condemned and immediate action should be taken to investigate the incident, arrest all suspects and consider criminal charges to ensure justice.

As shown by people’s interventions in recent months, freedom of expression and freedom of association and assembly are the basic pillars for the protection of society and individuals. The present moment should be utilized to consolidate these rights; such consolidation will create a fundamental change in the political culture in Sri Lanka.

The constant ongoing vigilance of the people is the only way to ensure that new systems of administration that are to be established will function for the benefit of the people and the nation. Therefore, people should keep a peaceful vigil, particularly at the present time and in the months to come, to ensure that the needed substantial change for the better could be achieved in Sri Lanka. The people also need to establish new civil society groups to monitor the developing political landscape and to ensure that future permanent structural changes will include new features on the basis of, and which will protect, democracy, the rule of law and human rights.