Thousands of protesters reached Colombo in various modes of transport 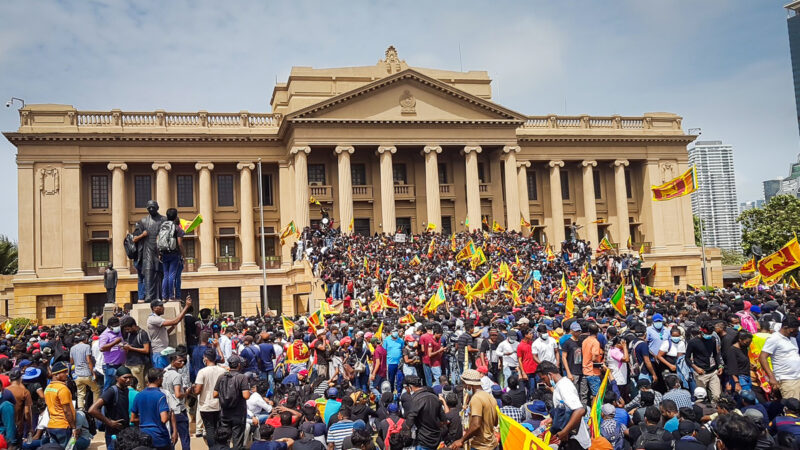 People taking back power. At the Presidential Secretariat in Colombo, Sri Lanka. July 9, 2022. Image by Amalini. Used with permission.

On July 9, Sri Lankans were pushed to their breaking point by the rising prices and acute shortage of fuel, food and medicines among other things. Thousands of people from all over the country marched toward the president's official residence in the capital Colombo demanding the resignation of President Gotabaya Rajapaksa. Incredible scenes of people marching toward the official residence of the president and storming the house flooded social media, evoking memories of the US Capitol siege on January 6, 2021. The president fled to an undisclosed location and news came out that he will resign in the coming days.

Amidst public protests, Prime Minister Mahinda Rajapaksa resigned on May 9, 2022. However, his brother, President Gotabaya Rajapaksa stayed in power despite ongoing protests.

Sri Lankans on the Brink

On July 5, 2022, Sri Lankan incumbent Prime Minister Ranil Wickremesinghe declared that the country is “bankrupt” and the nation is facing challenges to negotiate with the International Monetary Fund (IMF) to revive the country's economy. Sri Lanka is facing its worst-ever economic crisis as foreign currency shortages prohibited it from importing essential items such as fuel, food and medicine. The crisis is precipitated by a series of major economic blunders, which led the country to default on its foreign debt repayment last May.

On July 4, 2022, the country only had one day’s worth of fuel in its reserves which immediately forced all public transport to halt. Citizens faced long queues at the fuel stations to refill their cooking gas or fuel for transport. While the army has been guarding the country's fuel stations since last March, there have been reports of sporadic clashes outside fuel stations and troops had to open fire on June 19 to stop riots over fuel.

Activist and blogger Amalini shared a Twitter thread explaining how the fuel crisis has impacted lives in the island nation.

Thread of scenes and stories of #EconomicCrisisLK, from queues and homes around the island.

Photos where individuals are close and identifiable were taken with consent. #lka #srilanka pic.twitter.com/8cuS1UhwOt

Twitter user Sri Lanka Tweet reports that 14 people have died so far while waiting in long queues for fuel.

So far 14 people have died while waiting in long queues. 60-year old person reported dead after hospitalization following a sudden illness while waiting in line at a fuel station in Payagala.https://t.co/dCbUOnV394 #LKA #SriLanka #FuelCrisisLK #SriLankaCrisis

However, the nation will have to wait until July 22 for the next shipment of fuel.

As of June 2022, food inflation in Sri Lanka rose to an all-time high of 80.1 percent. As per a UNICEF survey, over 70 percent of Sri Lankan households had to curtail food consumption. Many businesses and schools have been closed. With rising unemployment, many urban dwellers returned to their villages to survive by growing their own food.

Peace-building activist Nabeela shared a Twitter thread titled “How are you surviving? #lka” which depicts how economically marginalized people are reeling under this economic crisis.

🧵 How are you surviving? #lka

My husband cannot speak and without batteries on this hearing aid, he cannot hear. We depend on his job and my oldest son (18 yrs) who is not in school anymore, for our family of 9. pic.twitter.com/vvz21WcnpC

“Our day has come!” Anatomy of a people's uprising

The economic crisis, severe inflation, daily blackouts, shortage of fuel and other essential items have pushed the Sri Lankan people to engage in peaceful and spontaneous protests since mid-March this year. The Occupy Galle Face sit-in protests at Galle Face Green, a large park in Colombo's financial district, also known as “Gota Gogama,” started on April 9, 2022. These protests, led by the social media savvy youth, including students, teachers, doctors and other professionals, are effectively leaderless. They set up dozens of tents to occupy the greenspace and sympathetic citizens have supported them by donating water, food and medicines. Participants are wary of politicians, both from the ruling party and the opposition.

The new Prime Minister Ranil Wickremesinghe and the incumbent President Gotabaya Rajapaksa couldn't do much to bring respite to Sri Lankans. The country slowly was steered into a virtual lockdown because the fuel supply had run out and both public and private transport came to a halt. The public anger reached a boiling point and the protestors at Gota Gogama announced a “massive people’s protest” for July 9. Their demand, publicised on July 5, 2022, includes the resignation of both the prime minister and the president who will be replaced by an “interim government”, which has been promoted by opposition parties in parliament. A “Peoples Council” has also been proposed, where representatives from the protestors will work closely with the interim government.

Aragalaya 2.0 : Thousands of protesters are currently heading to Colombo in various modest of transport, braving fuel crisis, demanding President Gotabaya Rajapaksa's resignation. A container on the road bringing a group of protesters pic.twitter.com/aIJ3K9CJYp

Amalini shared images that the buses and trains towards Colombo were packed with protesters.

Small jump back in the timeline – the Kandy and Gampaha trains arriving at Fort Railway. Protestors on top of and in between carriages. #lka #SriLanka #GoHomeGota pic.twitter.com/59sxWdlYV1

Twitter user Kithmina Hewage reminded everyone why the protesters were here:

In case anyone needed a reminder about why we are here today: pic.twitter.com/TUrhd4RiGK

No matter the outcome from here, may July 9th 2022 be the day #SriLanka realizes that it’s the power of the people, and not the people in power, that truly matters.

Millions of ordinary folks from all walks of life, united only by the love they share for our beautiful country! pic.twitter.com/oFIT4pogfa

At one point in the day, the protesters stormed into the president's residence and images on social media showed people occupying the bedroom, swimming pool, and offices of the house. In one image, an old lady protestor was seen sitting in the presidential chair. Protesters later torched the prime minister's house.

Quick trip into a small room opened inside the Presidential Secretariat. Every batch of the crowd that entered, hooted at the top of their lungs while they stood inside. #lka #SriLanka #GoHomeGota pic.twitter.com/fnTJdSlq2h

On July 9th night, Mahinda Yapa Abeywardena, the speaker of Sri Lanka's Parliament, informed the public in a televised statement that the president agreed to resign on July 13. Prime Minister Wickremasinghe has also agreed to resign, but mentioned that he will stay until a new government is formed.

Devika Brendon shares the emotions at the Citizen journalism website Groundviews in an article titled “Our Day Has Come!”:

We are drained. At last, after a ninety-day struggle, we have a lot to celebrate but nothing left to celebrate with. No fuel, no kerosene, no petrol. No energy.

And once we clear the last vestiges of the former regime from the seats of power, we have work to do. 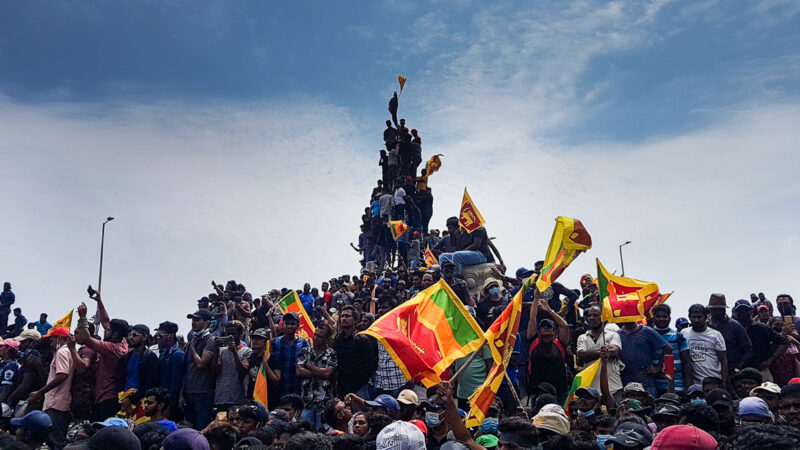 A scene of a living, breathing ‘monument’ of people. Colombo, July 9, 2022. Image by Amalini via Twitter. Used with permission.

Researcher and journalist Bhavani Fonseka at Carnegie Endowment For International Peace celebrates the power of citizen mobilization which shaped the recent protests:

The changes brought about in the last few weeks give hope that sustained, innovative, and inclusive citizen mobilization has a chance to transform Sri Lanka.