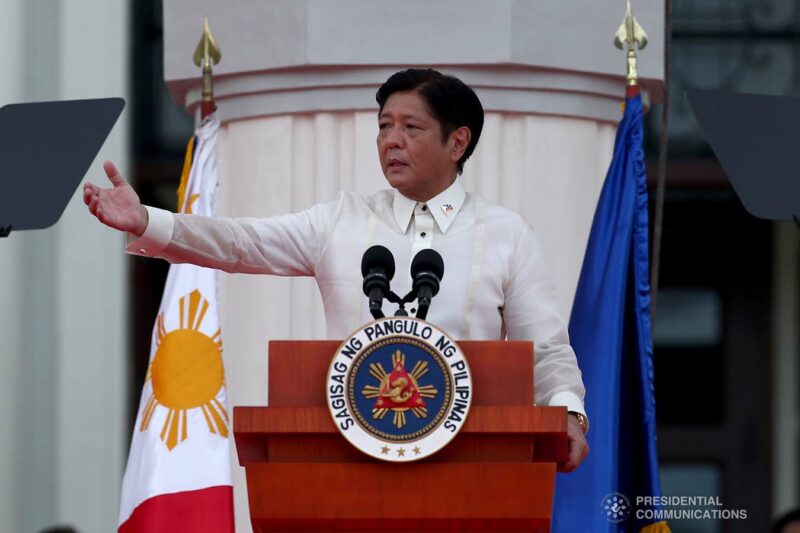 Philippine President Ferdinand Marcos Jr. delivering his inaugural address on June 30. Photo from the Facebook page of the Presidential Communications (Government of the Philippines)

Several media groups found lies and inaccurate statements in the inaugural speech of Philippine President Ferdinand Marcos Jr. which he delivered in front of the National Museum in Manila during his inauguration ceremonies.

Marcos was proclaimed president on June 30, despite allegations of irregularities that marred the May 9 national and local elections.

There were also questions about Marcos's candidate eligibility as he has been criminally convicted of tax evasion.

Marcos is the son and namesake of the late dictator Ferdinand Marcos who ruled the country for two decades until his ouster during the peaceful People Power uprising in 1986. The Marcos family is accused of looting billions of dollars from the national treasury when they were in power. They continue to deny that abuses were committed during the Philippines’ Martial Law years.

Human rights groups believe that the Marcoses used ill-gotten wealth to regain political clout over the past three decades by spreading false narratives about the dictatorship. These lies are found on YouTube, Facebook, TikTok and other social media platforms which enabled the Marcoses to whitewash their violent reign and erase their notorious role in undermining the country’s economy and democracy.

Marcos's inaugural speech shows how important disinformation was in his successful electoral bid, as his speech contained several lies and misleading assertions.

First, Marcos claimed that he got the biggest electoral mandate in the history of Philippine democracy. Vera Files, an independent fact-checker, clarified that “while Marcos Jr. did garner the highest number of votes in Philippine electoral history, his share of the vote is only the country’s third highest margin of victory.”

Second, Marcos cited the construction of windmills in his home province as among his achievements.

“Blades have been turning over the sand dunes of Ilocos Norte, harnessing a power all around but unseen, long before this day. I built them.”

This was flagged as false because the windmills were built by private companies.

“I built them,” President Bongbong said of the Ilocos Norte windmills

None of the windmills in Ilocos Norte were developed or even funded by Marcos Jr.#FactsFirstPH

Baguio Chronicle, a local media group, noted how this false claim was repeatedly invoked during the campaign period.

Even before the presidential elections, the Marcos family have appropriated projects and infrastructure enterprises in the attempt to rebrand their name and image in their decades-long disinformation propaganda campaign.

Another misleading statement by Marcos was the claim that “sufficient fossil fuel-free technology for whole economies has yet to be invented” and that “it is not seriously tried by rich countries.” Rappler, a news company, said that this is only partly true since advanced economies like Sweden, Norway, Denmark, Switzerland and Austria “have shown examples of progress to tackle emissions from energy generation.”

As expected, Marcos paid tribute to his father by stating that it was only during his time that food sufficiency was attained by the Philippines.

“The role of agriculture cries for urgent attention that its neglect and misdirection now demands. Food self-sufficiency has been the key promise of every administration. None but one delivered,” Marcos said.

Economists and other scholars were quick to debunk this historical distortion because the country’s economy was in severe crisis during the so-called “golden era” of the Marcos presidency. Rappler summed up the response of critics:

No administration has achieved total food self-sufficiency, which is defined as a country’s ability to produce consumption needs, like staple food crops, rather than buying and importing. Marcos’ 20-year rule brought famine, higher poverty rates, and inflation reaching 50%, all of which are additional measures of a country’s capacity for food self-sufficiency.

It was not only the speech that contained lies. A viral video by a Marcos supporter falsely claimed that Prince Charles, heir to the British throne, praised the speech of the president.

Media watchdog Center for Media Freedom and Responsibility warned about how disinformation could be normalized in the next six years of the Marcos presidency:

The inaugural speech raises concerns over how facts shall be regarded in the next six years. The eloquence in delivery and political speech craft are tools used by politicians to distract from the falsehood of their words. This early, the media should develop the habit of checking the lies that may be issued from the presidential podium. 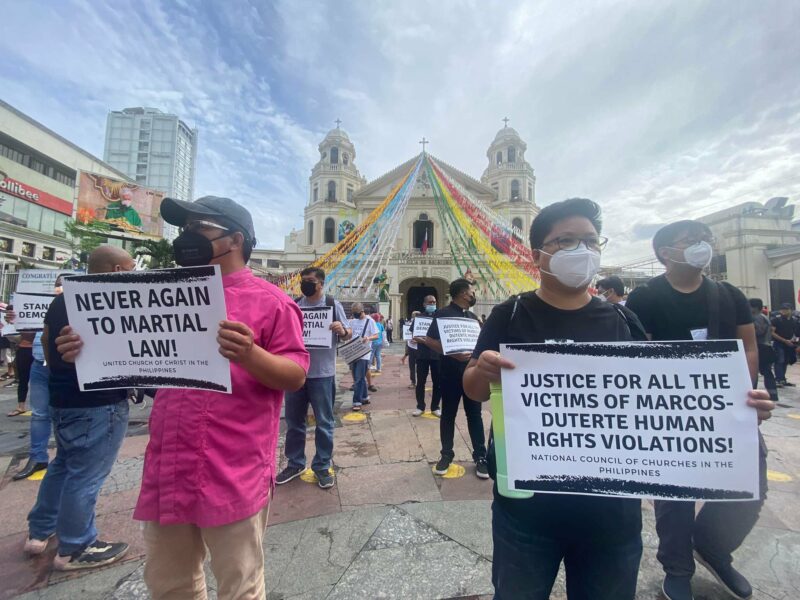 Human rights groups held a protest demanding justice and accountability during the same day when Marcos delivered his inaugural speech. Photo from the Facebook page of multisectoral alliance BAYAN