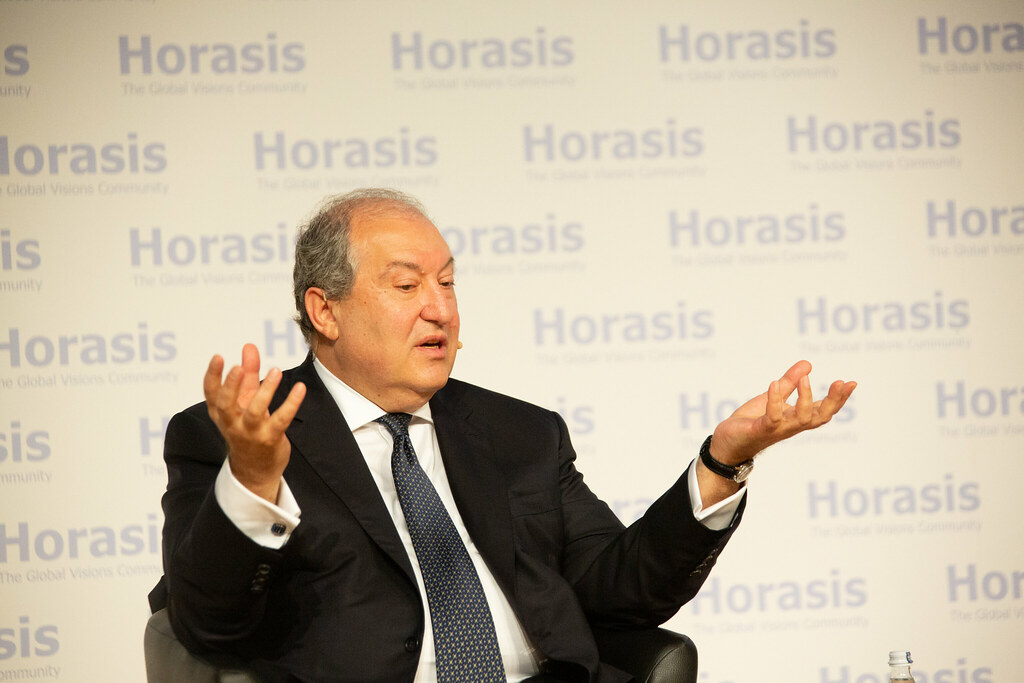 “Armen Sarkissian, President of Armenia, speaking to the Horasis delegates” by Horasis is licensed under CC BY-SA 2.0

However, a new investigation by Armenian investigative journalism media platform Hetq in partnership with the Organized Crime and Corruption Project (OCCRP) revealed that the resignation came after the President was probed for his dual citizenship. “Sarkissian, who announced his resignation from the presidency on Sunday night, had reportedly done so shortly after being contacted for comment about his Saint Kitts and Nevis citizenship by journalists,” reported OC Media.

“We had information that the president had a St. Kitts and Nevis passport, which was confirmed in correspondence with Sarkissian. We cannot provide many details of the investigation at this stage as it is a cross-border investigation and not yet complete,” reported Hetq.

Hetq said the questions of legitimacy around his presidency could have ramifications for all of the laws he passed and appointments he made in office, reporting:

Sarkissian told us that he believed that he was no longer a citizen of St. Kitts and Nevis from the moment he requested to put his citizenship on hold after he received it in return for investments. President Armen Sarkissian is unlikely to return to Armenia since he could be prosecuted for forging official documents.

The fact is that Armen Sarkissian started the official process of renouncing his citizenship in St. Kitts and Nevis not long before he was elected president in March 2018. According to the Armenia’s Constitution, he thus wasn’t eligible to be elected president.

Hence, all the decrees he signed, including various laws, the appointments of officials, the elections, even the appointment of the prime minister, are illegal.

The president resigned shortly after having this phone interview reported Hetq.

Omitting these recent developments, Sarkissian instead focused on critiquing the institution of the Presidency. “The President does not have the necessary tools to influence the radical processes of domestic and foreign policy in these difficult times for the country and the nation,” wrote Sarkissian in a statement published on the presidential website. “We have a paradoxical situation when the President has to be a guarantor of statehood without actually having any real tools.”

But the president knew from the start all the limitations of his seat, explained Eric Hacopian.

The president's role is largely ceremonial in Armenia while the executive power is held primarily by the prime minister. Armenia switched to a parliamentary system in a 2015 referendum. According to the state constitution, the president is responsible for ensuring the functioning of the Executive, Legislative, and Judicial powers of the Republic of Armenia. While the president holds the power to intervene in these branches, the role does not allow for direct control of any of them. As such, the role of the president is limited to approving, signing, and revoking international treaties, and appointing or recalling diplomatic representatives to foreign states and international organizations based on recommendations of the acting Prime Minister. The president also adopts decrees and executive orders.

Sarkissian said the root of the problem was the Armenian Constitution which, according to the president, “presupposes the supremacy of one institution over another” and “creates obstacles for well-known diaspora specialists.”

To solve this, the now-former-president, suggested creating “a system based on checks and balances,” rather than switching from a parliamentary system to a presidential republic.

According to the Constitution of Armenia, the head of the National Assembly — presently Alen Simonyan — will serve as acting president before a new president is elected by the parliament. Members of parliament should present their nominees for the position within 35 days.

According to DW reporting, Sarkissian disagreed with Prime Minister Nikol Pashinyan over his decision to remove the chief of general staff in March 2021 on the grounds that the military was plotting a coup to overthrow the prime minister. The country's constitution grants the President the powers to appoint, and dismiss the supreme command of the armed forces, as well as the highest military ranks and of other troops upon recommendation of the acting prime minister.

In lieu of recent developments, Armenia’s Prosecutor General’s Office has sent a request to the National Security Service (NSS) to investigate the now-former president's citizenship status. Meanwhile, the President's Office issued a statement on January 25, denying claims that Sarkisian's dual citizenship was what prompted the president to resign. In another statement issued the following day, the office said, the president's concerns related to “the real problems and challenges facing the state” and that it won't “comment on ‘conspiracy theories and political myths.'”

A career diplomat who had served as Armenia’s ambassador to the United Kingdom from 1998 to 2018, Sarkissian was elected president on March 2, 2018. In 1996, he briefly served as the country’s prime minister for four months, having been appointed by Armenia’s first president Levon Ter-Petrosyan. He was then replaced by Robert Kocharyan.

His tenure as president began in turmoil as the Armenian revolution broke out only a month after he had assumed the post, and catapulted opposition political figure Nikol Pashinyan to power.

Despite becoming president under Armenia’s old regime, Sarkissian appeared to have few public disagreements with Pashinyan in the years following the revolution. However, an open rift opened up following Armenia’s defeat in the Second Nagorno-Karabakh War, with Sarkissian calling for Pashinyan’s resignation as the country's Prime Minister and the creation of a new government of “National Accord” in November 2020.