Who is glorifying terrorism: Hong Kong students or the Chinese government?

A meme accuses China of hypocrisy regarding terrorism 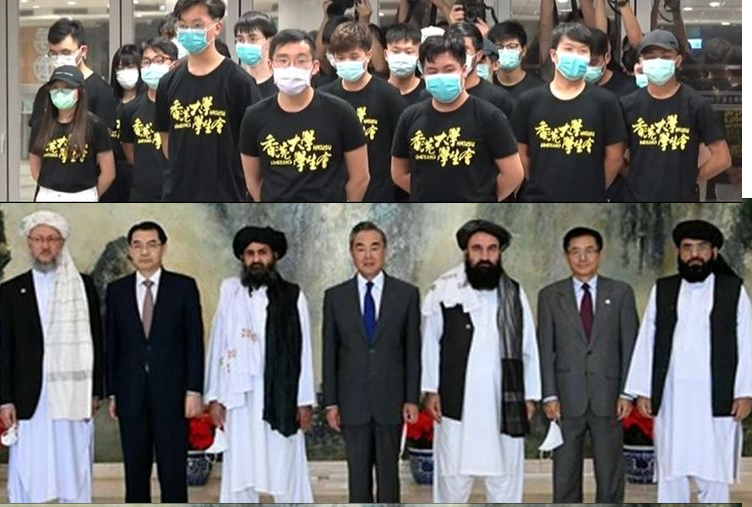 An edited version of this meme appeared on the Facebook page: ‘I oppose police violence’

A meme contrasting a photo of China Foreign Minister Wang Yi standing side-by-side with Taliban representatives and a photo of students from the University of Hong Kong (HKU) went viral on social media on August 18, 2021. Some netizens sought to criticize the Hong Kong and Chinese government's apparent double standard in defining terrorist groups, as they framed numerous university students and groups as dangerous terrorist threats while labelling the Taliban as ‘moderate students’.

The meme went viral just days after the arrest of four HKU students on a charge of ‘advocating terrorism’ after they passed a motion in the University Student Union on July 7 mourning a man who stabbed himself to death after attacking a police officer with a knife on July 1, 2021 — the 24th anniversary of Hong Kong’s handover to China. Through the motion, the student organisation expressed ‘deep sadness’ at the death of the 50-year-old Leung Kin fai and expressed appreciation for his ‘sacrifice’ to Hong Kong.

Soon after the assault had taken place, the Police Force labelled the July 1 police stabbing as an incident of ‘lone-wolf terrorism’ and said mourning the attacker’s death will glorify the act and can be viewed as ‘inciting a terrorist act’.

The students involved in the motion withdrew their statement, made a public apology and resigned from their positions in the student organizations on July 8 after Arthur Li, the University’s governing council chair, said that he would welcome a national security probe into the campus.

The public apology, however, did not stop the police from pursuing the case. On July 16, the national security police searched the Student Union office. One month later, on August 18, four students were arrested.

The four arrestees were the HKU Student Union executive committee and Union Council members: Kinson Cheung King-sang, 19,  Anthony Yung Chung-hei, 19, Charles Kwok Wing-ho, 20, and Chris Shing-hang Todorovski, 18. They were brought to the court on August 19 under the charge of ‘advocating terrorism’ and faced an alternate charge of inciting others to wound officers. All remained in police custody as three had their bail denied and one pending bail review. The case was adjourned until September 14.

In the meme, a photo of the student group apologising for their actions was contrasted with a photo of Wang Yi taken on July 28 during a meeting with a group of Afghan Taliban leaders in Tianjin.

Below is one version of the meme which went viral on Twitter:

#ahnewsfeed HKU students mourned for the dead police assaulter is advocating terrorism, what about Wang Yi’s urging to cooperate with the Taliban, a well-known terrorist group?

Another version of the meme, posted on a Facebook page ‘I oppose police violence’, presented a summary of the Chinese Communist Party’s response to the Taliban's taking over of Kabul and posed the following question to Senior Superintendent Steve Li Kwai-wah of the National Security Department of the Police Force:

The CCP highly praised the Taliban and glorified it as a moderate organization, do you consider that as advocating terrorism?

On August 15, Li Shaoxian, Director of China-Arab Research Institute of Ningxia University said in an interview with The China Central Television:

It seems that the Taliban has given people a new impression. Soon after it besieged one city, it released information to comfort people… people carried on their work as usual, they did not intervene.

On August 16, Hua Chunying, spokesperson of the Foreign Ministry described the current situation in Afghanistan as ‘the will and choice of the Afghan people’ and welcomed the Taliban’s invitation for China’s participation in the country’s future reconstruction project. On the same day, the Chinese state media outlet People’s Daily introduced the Islamic militant group to Chinese netizens on Weibo as ‘students’. It said the Taliban was a student group based in refugee camps and it expanded dramatically because it received the support of the poor.

The brief introduction was deleted, reportedly after a flood of comments questioning the omission of the Taliban’s terrorist background.

Similar commentary was published by another state-funded media outlet Global Times on its WeChat channel to prove that the Taliban had become more moderate.

The meme posted on the Facebook page, ‘I oppose police violence’, has been shared 330 times. Some have left sarcastic comments such as:

Will the Hong Kong CCP hire the Taliban as an advisor?

Today words are more dangerous than bullets. Those who can read and write are terrorists.

In the future, Hong Kong students should learn from the Taliban then

The memes have also spread among overseas Hong Kong activists, including exiled activist Nathan Law, who took to Twitter last week to show the hypocrisy and China’s double-standard on terrorism:

The hypocrisy of #CCP:
1) #Taliban are friends but university students are terrorists.
2) it took 24 hours to arrest and send these students to court, but 47 pro-democracy politicians and activists, arrested in Feb 2021, still haven’t been on trial. #Beijing #HKU #hk #hongkong pic.twitter.com/lAowaWYCy0

#CCP dares to vindicate Taliban is just a student group which weaponize itself in order to make Afghans’ lives better. But, CCP instructs #HongKong govt to treat its students relentlessly. These students did nothing wrong but mourned a victim of an inhumane govt. It's ridiculous. pic.twitter.com/qSsEfBxL8s