Police said the acts of mourning was no different from supporting terrorism. 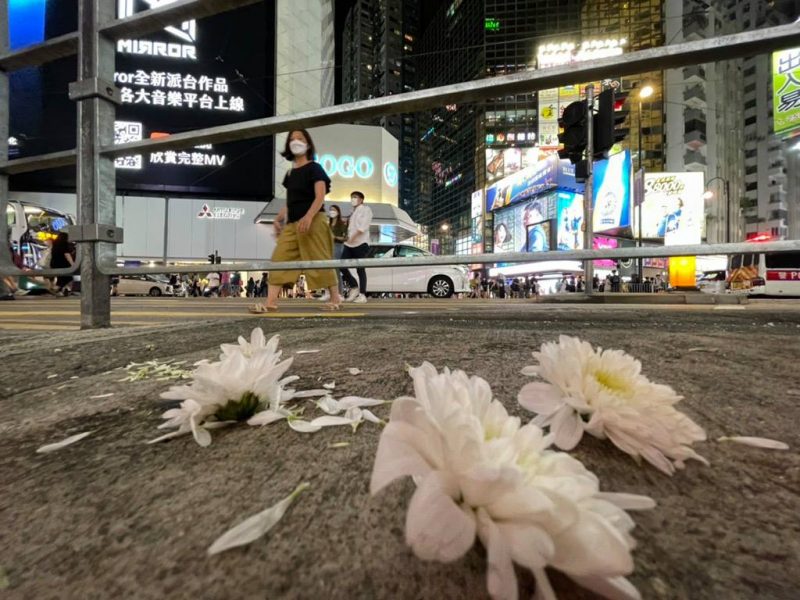 Some Hongkongers placed white flowers near the scene of attack to mourn the Leung's death. Photo used with permission.

July 1 2021, the 100th anniversary of the establishment of Chinese Communist Party and the 24th anniversary of the handover of sovereignty to China, ended dramatically with a police stabbing in Hong Kong. The assailant, 50-year-old Leung Kin Fai stabbed a police officer in the back in Causeway Bay at 10 pm.

The injured police officer, 28, was hospitalized and is currently in a stable condition after surgery. On the other hand, after the attack, the assailant stabbed himself in the chest and died in the hospital.

The newly promoted Secretary of Security Chris Tang described the incident as a ‘lone-wolf style act of domestic terrorism’ and claimed that the man had been radicalized by hate speech. Some were concerned that this characterization foreshadows increasingly repressive policies within the city. Edward Chan, a Ph.D. student, was among the first to express such concern:

No one would want to see this to happen.

HK Police has determined this incident as “lone attacker terrorism”. But then, who was he inspired by? And also, isn’t that the NSL has made HK a safer place?

My concern is that: 1. More repression; 2. People imitate https://t.co/2hrfytZ5IZ

The police authorities banned the July 1 rally for the second consecutive year on the grounds of pandemic control. Since 1997, the annual event has been an occasion for citizens to express their grievances on government policy.

To ward off potential public gatherings, the police deployed thousands of officers to protest hot spots around Hong Kong Island. Causeway Bay was one of the district with the heaviest police presence.

Local media outlets later revealed that Leung was employed and living with his parents. He had left a suicide note in which he criticized the National Security Law and police agencies’ abuse of power during and after the 2019 anti-China extradition protests crackdown, as hundreds of protestors were injured, arrested and charged with serious crimes such as police assaults, rioting, inciting rioting, state subversion and etc..

On social media, pro-democracy netizens described Leung as ‘a man who seeks justice’ (義士）or ‘a hero who sacrifices himself'（烈士）and  a number of citizens went to Causeway Bay to mourn Leung's death:

2/3
Citizens stood in silence & tried to lay down white flowers at the site where Leung died after stabbing himself in the chest, but police cordoned the area and issued tickets for littering and breaching Covid measures. Citizens therefore laid flowers in nearby areas pic.twitter.com/8TLSYH8F7W

It will incite further hatred, divide the society and eventually breach social order and endanger public safety, threatening everyone in Hong Kong…Members of the public should remain rational, discern fact from fallacy and not tolerate or glorify violence. We should not let misinformation mislead the next generation into going astray or even worse to become terrorists.

The newly promoted Chief secretary John Lee even implied in his blog post that act of mourning could be interpreted as inciting or advocating terrorism. Independent journalist Aron Nicholas highlighted Lee's comments on Twitter:

John Lee said he has “seen people online inciting support for the murderer who tried to kill a police officer…including by so-called mourning and laying flowers.”

However, criminology experts are concerned that the label of ‘lone wolf terrorist’ might further antagonize pro-democracy Hongkongers and intensify animosity between them and the police forces. The label carries the risk of ‘creating a self-perpetuating problem’, according to Raffaello Pantucci, an expert on terrorism.

Many, such as independent journalist Rich Scotford, are worried that the terrorist label could lead to the introduction of Xinjiang style repression to Hong Kong:

More than a million Uyghurs have been arbitrarily detained in re-education camps China’s Xinjiang region since 2018. The Chinese authorities have, on the other hand, justified the policy as effective measures against terrorism and extremism.

The anticipation of more repressive measures is not groundless, on July 4, the police authorities arrested a 20-year-woman and a 26-year-old man for posting inflammatory messages on social media. The messages allegedly incite others to kill officers and set police premises on fire. The police, however, has not revealed exactly what were written in the messages.