Frank discussions of sexuality remain taboo for some Ukrainians online 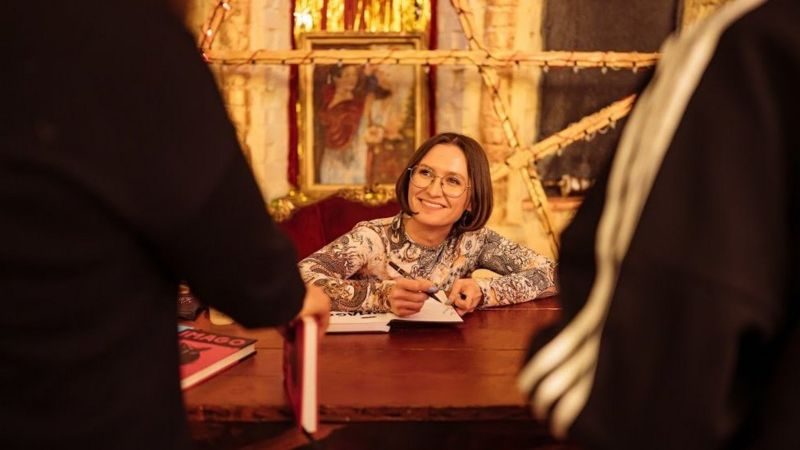 Anzhela Yeremenko, former assistant to the head of Ukraine's Central Election Commission and author of the Bad Mama blog. Photo from Facebook.

Anzhela Yeremenko, a now former assistant to the Head of Ukraine's Central Election Commission, has resigned from her job after facing criticism for a recent Facebook post discussing sex toys. While some Ukrainian social media users have castigated Yeremenko for “oversharing,” others have called the critical comments—and her decision to resign—an overreaction.

Aside from her work in the Election Commission, Yeremenko also runs a popular personal Facebook page, Bad Mama. She regularly blogs for her 31,000 followers about relationships, motherhood, dating, romance and sex, and her posts are often frank and personal. She says she started the blog six years ago to “share [her] feelings and tell stories” and has recently also self-published a book based on her personal reflections.

On February 28, Yeremenko shared a humorous story of a recent Valentine's Day gift she received from her boyfriend—a vibrator. Her satisfaction with the present soon dissipated, as the sex toy turned out to be faulty. It “vibrated twice, then blinked with a red light” and stopped working, she wrote. Further attempts to charge it didn't help (“way to spoil a first time,” she wrote), and Yeremenko said she had to take the toy to a service center for repairs. “The moral of the story: buy your vibrators from proper shops, otherwise there will be no orgasms for you (or for me),” she quipped.

Many of Yeremenko's readers took issue with her post, flooding her comments with criticism. “If any civil servant in a normal country allowed herself to espouse even a few of these words, she would be fired the next day,” seethed one user. “Are you serious? A Central Election Commission adviser? Where do they find them? Maybe you should change your job before they make you?” wrote another.

Among the critical voices, however, there were quite a few supportive commenters on Yeremenko's post, from both men and women. User Andriy commented that “writing about vibrators is totally normal. All of you who think otherwise, wake up, we're not in the Middle Ages anymore.” Another user, Maria, also defended Yeremenko: “This is her personal blog and she decides what to write about, if you don't like it, don't read it.”

Yet another user, Oleksandr, despaired: “I shouldn't have read the comments. The number of aggressively conservative people here is shocking. A person is writing about her personal life on her personal blog, and is getting flack for it. Why do you care what someone does at home? Are you savages?”

Oleksandr Ostapa, a spokesperson for the previous CEC head, Tetyana Slipachuk, told BBC Ukrainian that he thought the situation reeked of “Soviet-style hate” and praised Yeremenko's professionalism as instrumental in “taking CEC's communication to another level.”

Though Ukrainian society has made strides in opening the conversation around sexuality, gender equality and diversity, many topics still remain taboo, even to a seemingly progressive social media audience. In 2016, a post by feminist activist Nastya Melnychenko calling for more open discussions around women's experiences of sexual harassment and sexual violence—and using the hashtag #IAmNotAfraidToSayIt—caused heated debates in the Ukrainian public sphere.

Anzhela Yeremenko's story has a happy ending. On March 18, she posted on Facebook that she now has a new job: as an external consultant for the parliamentary committee tasked with reforming the public service, she would be dealing with global communications about the ongoing process of change. “How ironic: I resigned because the old system doesn't tolerate people like me,” Yeremenko wrote. “And now I will be the voice of its reforms.”