“If we burn, you burn with us” 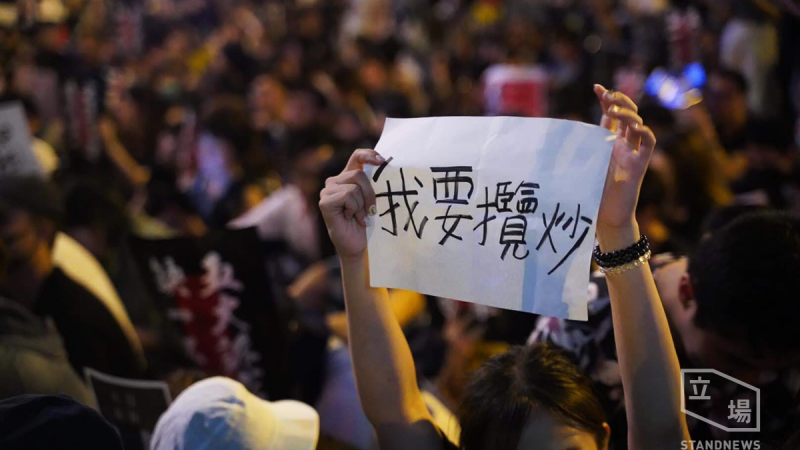 I want to ‘laam chau’.” (If we burn, you burn with us.) Image from Stand News, used with permission.

To mark a year since the beginning of the anti-China extradition protests, Hong Kong online media outlet Stand News curated a series of articles reflecting on the opposition movement. In the following report, it interviewed Finn, a key member of a network calling for international sanctions against China for hurting Hong Kong's autonomy. The original report, in Chinese, was published on July 9, 2020. The following edited version, translated by Winnie Ko, is published on Global Voices under a content partnership agreement.

“Laam chau” (攬炒), which means mutually-assured destruction, has emerged as a popular political term in Hong Kong as a result of its anti-extradition protests.

The spirit of “laam chau” is manifested in the slogan, “If we burn, you burn with us”, reflected in the call for international sanctions against China’s policy in Hong Kong, which undermines the city’s autonomy under the “one country, two systems” principle.

The term, which originated from the username, “I want to laam chau”, on the Reddit-like forum LIHKG, has even been picked up by the pro-establishment camp, including Beijing’s Liaison Office in Hong Kong.

Finn (a pseudonym), the original person behind the username, laughed:

I never thought that the username I created would become a topic that all Hongkongers talk about.

Finn is not the only person behind the username. As the Hong Kong government refused to withdraw the extradition bill after the million people rally on June 9, 2019, he wrote on the forum and recruited a group of like-minded people to support Hong Kong’s protests from aboard.

“I want to laam chau” has quickly evolved into a team — one that Finn describes as “grassroots international lobbists”. Grassroots because its members are not political celebrities like pro-democracy activist Joshua Wong, neither do they have any existing political connections, political capital or fame.

Chief Executive Carrie Lam’s decision to push through the second reading of the extradition bill in the Legislative Council of Hong Kong on June 12, 2019, triggered the team’s first campaign. More than a hundred emails were sent to foreign politicians calling for their attention to the bill, and urging them to lobby their government to sanction major officials by nullifying their passports.

The aim was to influence the votes of the pro-establishment lawmakers, but while the campaign received more than 10,000 likes on LIHKG, very few foreign politicians responded to the call.

The campaign that grabbed worldwide attention

The team's follow-up, however, captured the world’s attention: In just a few hours, it crowdfunded more than half a million Hong Kong dollars for front-page coverage of its appeal to G20 leaders, which appeared in a dozen leading international newspapers on June 28, 2019.

Ever since, the team has become known as the “Fight for Freedom, Stand with Hong Kong” campaigners. They soon began inviting politicians from different countries to visit Hong Kong and observe the protests for themselves; Bob Seely, a parliamentarian with the Conservatives in the UK, made the trip at the end of August 2019.

That November, more than 20 politicians from abroad were invited to Hong Kong to observe the district council elections.

The “laam chau” groups across the world have been organising solidarity rallies, and reaching out to their own countries’ politicians in order to explain Hong Kong's political situation and persuade them to visit the city.

By mid-June 2020, the “laam chau” collective joined the Inter-Parliamentary Alliance on China (IPAC), an international political platform comprising parliamentarians from 13 countries to “help craft a proactive and strategic approach” on China-related issues.

One year on, “I want to laam chau” remains an influential account on LIHKG, the scale of its team has expanded threefold, and its members are located all over the world.

Reclaiming Hong Kong as the ultimate objective of ‘laam chau’

Finn believed that the “laam chau” team would be targeted by the newly passed Hong Kong national security Law, predicting:

[…] organisations, politicians, parliamentarians, students based in Hong Kong who are resisting on the international front, will definitely be suppressed.

Indeed, the discourse of “laam chau” is on the Chinese government's radar. Beijing’s Hong Kong and Macau Affairs Office (HKMAO) first mentioned the term in a September 2019 press briefing in which it associated the term with “terrorist sentiment” and “colour revolution”.

By May 2020, HKMAO issued another statement urging Hongkongers to “reject ‘laam chau’ and opt for development”.

For Beijing, ignoring the meaning of “mutual”, “laam chau” means “self-destruction” For the “laam chau” team, it is a response to Beijing’s destruction of Hong Kong. Finn added:

For Hongkongers or protesters, the target of ‘laam chau’ is the the CCP [Communist Party of China]. However, in the narrative of the pro-Beijing camp, the target has shifted to ‘all Hongkongers’. They have ignored the reality that Hongkongers have been burnt by the CCP for a number of decades, that’s why we want to burn the CCP in this struggle. They distorted the meaning of ‘laam chau’ on purpose.

He clarified that “laam chau” is a means rather than an end, that the target is not destruction, but rather a declaration to the CCP that it has to pay for hurting Hong Kong.

Saying that Hong Kong has entered “a dark era” with the passing of the national security law — which he sees as a major step by the CCP to destroy the city — Finn stressed that the ultimate objective of “laam chau” is to reclaim and liberate Hong Kong as a truly international city; loosening the CCP’s control plays a critical part.

Yet, the reins do not appear to be loosening. On July 1, 2020, a dozen protesters were arrested. A 23-year-old holding a “Liberate Hong Kong, revolution of our times” flag as he rode his motorcycle was charged under the national security law with inciting secession and engaging in a terrorist act. His bail was rejected. If convicted, he could face a minimum of three years’ imprisonment and a maximum life sentence. Pro-democracy shops, terrified of the potential fallout, were forced to clean up all their political posters overnight.

If we are to hurt the CCP, we have to remove its ‘white glove’ [i.e. the role of Hong Kong as middleman] to conceal the CCP’s secret transactions […] Hongkongers must pay this price. Only then can the CCP be hit; there is no free lunch in this world.

According to Finn, the success of international lobbying relies on the determination of Hongkongers:

The political struggle inside the Legco [legislative council], street protests and international support are interlinked, and each of them is indispensable.

In May 2020, the team launched a crowdfunding project to help continue its international lobbying and networking. Its goal is to raise 175,000 United States dollars; it has already hit 90 per cent of the target.

Money from the fund will be allocated to overseas Hongkongers engaged in lobbying, organising support groups, and coordinating solidarity rallies.