A crowdfunding campaign raised over HK $5 million in public donations 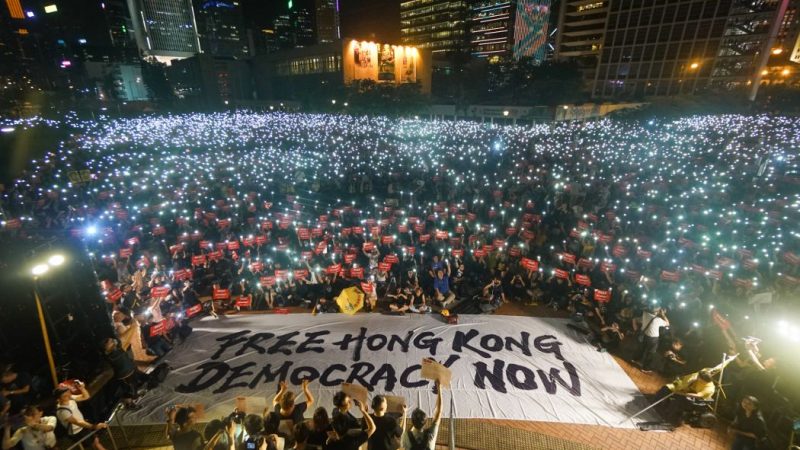 The following post was originally written by Jennifer Creery and published by Hong Kong Free Press on June 28, 2019. The following edited version is republished on Global Voices under a content partnership agreement.

An appeal to G20 leaders to act on Hong Kong’s extradition law crisis appeared in more than 10 international newspapers on June 28, 2019, just as the leaders’ summit got underway.

Though Beijing was clear that it would not allow the discussion of the Hong Kong affair at the G20 meeting in Osaka, Japanese Prime Minister Shinzo Abe did raise concerns about the issue with Chinese President Xi Jinping on the first day of the global leaders’ meeting, stressing the importance of a “free and open Hong Kong” under the One Country Two Systems framework.

Hong Kong has been rocked by a series of protests over legal amendments proposed in February 2019, which would allow the city to handle case-by-case extradition requests from jurisdictions with no prior agreements — most notably, China.

These amendments would enable the chief executive and local courts to handle extradition requests without legislative oversight, even though critics have raised concerns over the risk of residents being extradited to the mainland, which lacks human rights protections. The bill was suspended on June 15, but not withdrawn.

The full-page black and white ads calling on readers to “Stand with Hong Kong at G20” have appeared alongside an open letter in leading publications like The New York Times, The Guardian in the UK, The Japan Times, The Globe and Mail in Canada, Germany's Süddeutsche Zeitung, and The Chosun Ilbo in South Korea. 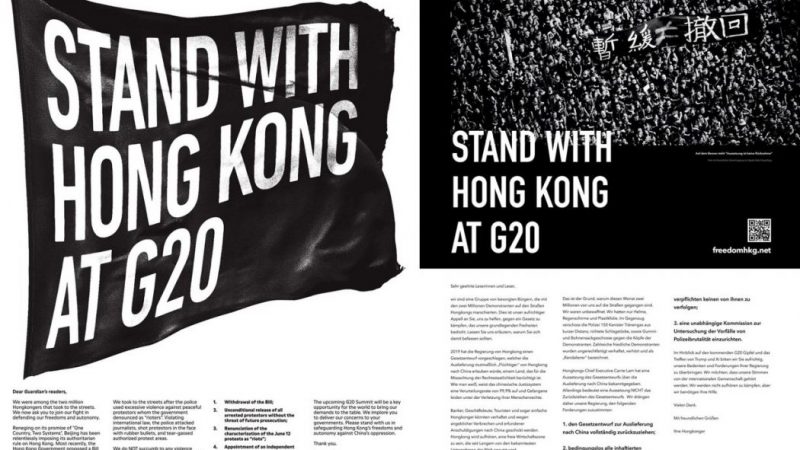 Layout of the political Ads. Image from HKFP.

Reneging on its promise of ‘One Country, Two Systems’, Beijing has been relentlessly imposing its authoritarian rule on Hong Kong. Most recently, the Hong Kong Government proposed a Bill that would allow anyone to be extradited to China, a country infamous for its disrespect for the rule of law. This would threaten our fundamental freedoms and affect international businesses in Hong Kong.

It also called on G20 leaders to voice concerns about Hong Kong’s freedoms at the summit, urging them to encourage the city’s government to withdraw the controversial extradition bill, conduct an independent investigation into alleged police brutality on June 12, 2019 and release all detained protesters.

The appeal was paid for by a crowdfunding campaign that raised over HK $5 million in public donations. Thanks to the contributions of 20,000 donors, the fundraiser reached its original HK $3 million target within hours of the campaign going live on June 25.

In addition to this fundraising initiative, over a thousand anti-extradition protesters made their way around the city on June 26 to deliver petition letters to more than a dozen foreign consulates, urging their leaders to speak up for Hong Kong during the G20 Summit.

That evening, thousands gathered at Edinburgh Place in Hong Kong's central business district, calling for world leaders to use their voices in support of Hong Kong's freedom and democracy. Crowds wearing all-black spilt out of the public square, with many demonstrators holding signs that read “Free Hong Kong” and “Democracy Now”.

Drone footage captured the scale of the anti-extradition law protest in Central District ahead of the G20 Summit:

The Civil Human Rights Front (CHRF), which organized the assembly, issued a statement:

If you believe in values like democracy, freedom, human rights and the rule of law like we do, please, we urge all of you to voice out during the G20 Summit, and defend our rights together with Hong Kong people.

There have been protests and flash mob action outside of Hong Kong as well. A group of Hong Kong protesters traveled to Osaka and rallied in the city on June 27, one day before the opening of the G20 Summit.

On June 28, about 100 people staged a smart mob action at New York's Grand Central Terminal to draw international attention to the political situation in Hong Kong: 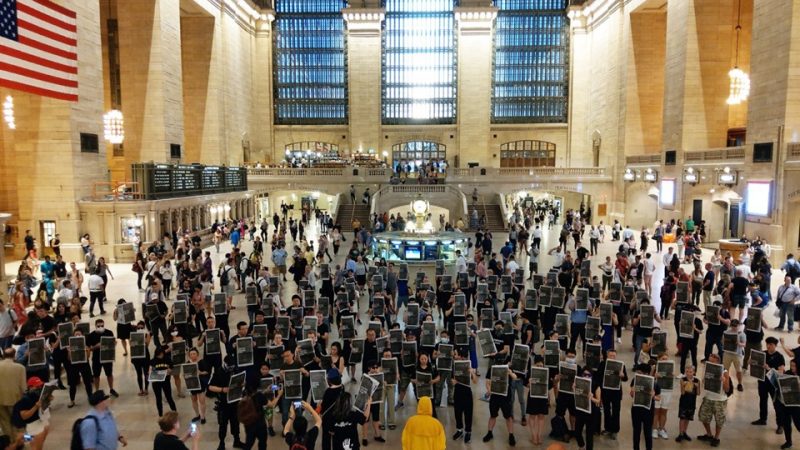 The G20 Summit, taking place in Osaka, Japan on June 28 and 29, hosts world leaders from the European Union and 19 countries with the world's largest economies as they convene to discuss pressing financial and economic issues. However, on June 26, China’s Foreign Ministry spokesperson, Geng Shuang, warned external powers against interfering with its internal affairs: “China will certainly not agree to G20 discussing Hong Kong affairs. This is entirely China’s internal affair,” he said.