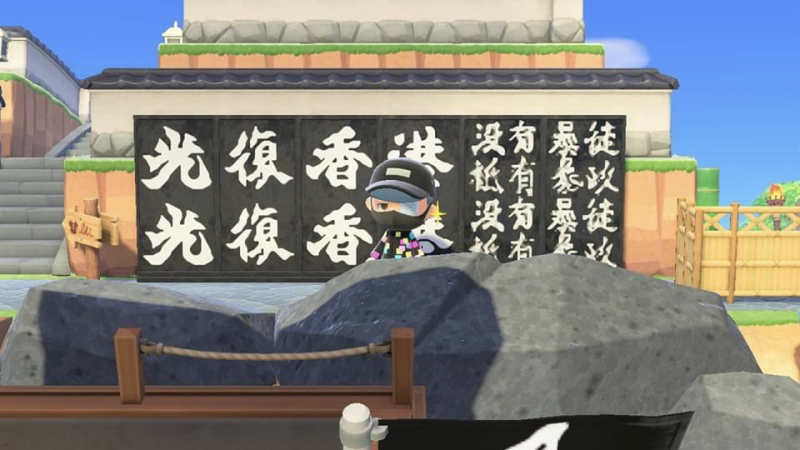 Hong Kong’s youth-driven anti-government protests, which at their peak brought more than one million people out onto the streets, have largely subsided since January due to the outbreak of COVID-19.

Schools and universities, which became hubs for the protest movement, are suspended, while the Disease Control Prohibition on Group Gathering issued March 28 linits gatherings in public places to no more than four people.

Since then, young people have been taking to their screens rather than to the streets, and filling their free time with online video games.

One online game, Animal Crossing, has stood out during the pandemic, as Hong Kong protesters have made use of the game's platform to air their political views and keep the spirit of the protests alive.

The social simulation was released for Nintendo Switch on March 20, 2020.

Animal Crossing allows gamers to escape to a deserted island where they can freely build a house and garden using resources on the island. Moreover, gamers are able to host events and open their islands up to visitors. The game app also enables voice communication among gamers

At the end of last month, a number of gamers gathered on the platform to create a virtual concert where they sang the protest anthem — Glory to Hong Kong.

Below is a video recording of the game scene:

@studioincendo meanwhile shared a gamer’s island where visitors are invited to strike portraits of Hong Kong's Chief Executive with hammers:

This is how #hongkong ppl spend our time during coronavirus lockdown – villain hitting in #animalcrossing, the villain is #CarrieLam, the worst governor in #hongkong history.#AnimalCrossingNewHorizons#StandWithHK pic.twitter.com/K5AbOTl9tD

Joshua Wong, a prominent pro-democracy activist, declared the game a new phase in the protests, which survived repeated crackdowns only to be brought to a halt by measures to combat COVID-19.

Animal Crossing is Fast Becoming a New Way for Hong Kong Protesters to Fight for Democracy! The #Covid_19 pandemic has halted public demonstrations, so protesters are taking their cause to #AnimalCrossing.https://t.co/A599kjlYsV

(This is my island!) pic.twitter.com/vjBhzw1nUa

Shortly after Joshua Wong’s Tweet, on April 10, Animal Crossing was removed from online stores across China.

Mainland censors are widely believed to be behind the removal and mainland gamers have blamed Wong for the ban. The incident has attracted international press attention.

Never one to pass up an opportunity to further the cause, Wong has been offering journalists tours around the various protest sites in the game.

He believes that online platforms can become a new arena to raise public awareness about Beijing's political encroachment in Hong Kong.

Over a year since the beginning of mass protests sparked by a proposed bill on extradition to China, may Hong Kongers are itching to get back to the real thing, however.

On April 18, taking advantage of diminished protest potential, Hong Kong police arrested 15 opposition leaders on suspicion of organising and participating in unauthorised assemblies against the Hong Kong government's proposal to amend the extradition law between August and October 2019.

The arrests have triggered small protests in major shopping districts over the past two weeks. Police have charged the protesters, citing the Prohibition on Group Gathering.

With the city marking 14 consecutive days of zero locally transmitted COVID-19 infections, it is anticipated mass protests will start up again in June, when disease control measures are set to be lifted.