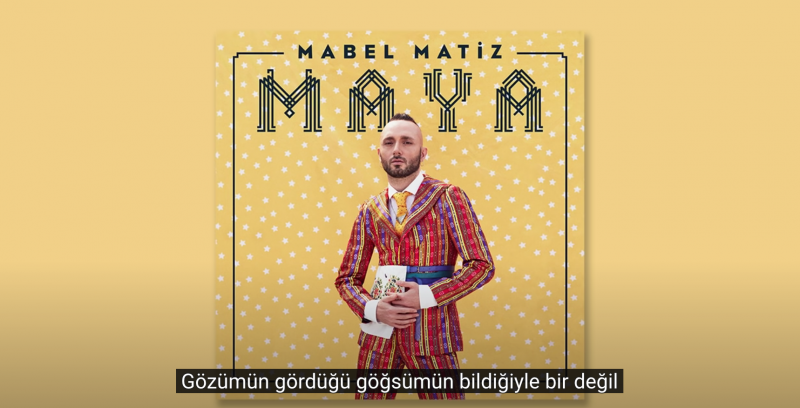 Screenshot of the YouTube video featuring a song by Mabel Matiz including the lyrics at the heart of the current controversy around the Higher Education Institutions Exam (YKS): “Gözümün gördüğü, göğsümün bildiği ile bir değil” (“what my eyes see is not what my heart feels”)

In Turkey, a country of over 83 million people, one needs to pass an entry test, the Higher Education Institution Exam, called Yükseköğretim Kurumları Sınavı in Turkish (YKS) to enter university. This year, the multiple-choice questionnaire was taken in physical spaces by 2.5 million people, despite the COVID-19 pandemic.

On March 26, the Council of Higher Education announced the dates for YKS as July 25-26. On May 4, Turkish President Recep Erdoğan changed them to June 27 and 28.

The changes and the uncertainties around the exam amid the COVID-19 pandemic launched countless discussions in Turkish society and on social media: How do date changes affect the psychology of students, given the level of stress associated to YKS for which candidates prepare for months? How would COVID-19 prevention measures be applied and respected (social distancing, temperature measurements, the use of masks) when bringing together 2.5 million people?

In 2019, 74.16 percent of the candidates passed the first part of YKS, and only 39.4 percent succeeded in the second part of the exam.

Turkey registered its first confirmed COVID-19 case on March 11, and by July 15, around 5,500 people infected with the virus have died, while there have been more than 200,000 confirmed cases of the disease in the country.

On July 1, the government enforced special normalization measures: Businesses such as restaurants, cafes, cinemas and wedding halls that had been closed for about three months reopened with social distancing restrictions. Patrons are now required to wear masks and will have their temperature taken as well.

While students and opposition parties called for a further postponement of the YKS, the government went ahead with its plans: In late June, 2.5 million people took the exam.

As can be seen in this tweet, concerns over enforcement of social distancing in this context proved to be legitimate:

YKS, with 2.5 million students, is taking place despite all the warnings: social distancing disappeared

COVID-19 is not the only debate surrounding YKS in 2020. An even more impassioned discussion started in early July in relation to a text selected for the Turkish language exam. One of the questions referred to the song by pop singer Mabel Matiz, a member of the LGBTQ+ community, “Fırtınadayım” (“I am in the storm”):

The question about the meaning of “Gözümün gördüğü, göğsümün bildiği ile bir değil” (which can be translated as “what my eyes see is not what my heart feels”) has left its mark on social media because of Mabel's popularity among young people (some of his videos have 50 million views) and his sexual orientation.

Following growing debates on Twitter, Halis Aygün, the president of the Center for Measurement, Selection and Placement (ÖSYM), the government body responsible for preparing the exam, gave an interview to far-right conservative media Yeni Akit in which he said the matter would be investigated and that those responsible for including the text would be fired:

The 2020 YKS was completed safely and successfully in 188 exam centers in three sessions with the participation of approximately two and a half million candidates. The question pool is created with the participation of thousands of academicians from different universities of our country. The sensitivity of the management of our institution about our national, moral values and social value judgments is clear. An investigation has been launched into the content of the relevant question in the Turkish area of the 2020 YKS's TYT [this refers to one portion of the YKS exam] session. The members of staff responsible will be discharged from the process of question preparation.

[Top]  ÖSYM President spoke for the first time after the exam!
“An investigation has been launched into the content of the problem. Responsible persons will be removed from the question preparation processes. “

[Bottom] It is not enough [to remove him], the neglecting president must be removed from the management process so that he is properly done with.

Conservative segments of society also question the intention behind the choice of that question:

In today's #YKS2020 exam, couldn't you find anyone else to show to teenagers other than the gay and LGBT advocate Mabel Matiz? (The one who carries a banner saying “we are faggots”) What are you trying to do? [top of the post]

Public opinion remains largely divided as other Twitter users point out the success and popularity of Mabel Matiz:

Dear investigative board members, I recommend that you watch Mabel Matiz's clips. Because we have no other artists who have embraced our culture this way for many years. That's why #mabelmatiz is the treasure of our land. He is a unique “artist”

This netizen draws attention to the fact that by focusing on a gay singer politicians avoid addressing real issues:

Nobody makes any noise about rapists, yet Mabel Matiz question becomes the subject of an investigation.

And this one concludes:

You say “our social value judgments” but Mabel Matiz is the best reflector of our culture. Thus investigation should be about the ones who insult Mabel Matiz and discriminate against him. #MabelMatizisnotalone [Top of post]

Mabel Matiz's response to the controversy

On July 3, as the debate became more heated, Matiz finally broke his silence:

Hi:) I was very happy that my music was be the subject of such an important exam. Now I am amazed at how my personal values are subject of the same exam. Look what I was tested with, while the geographical sign logo was about placed next to my name. Well, I say that life's exams never end :) Another roll call came from here. I read your intense messages of support. I understand what I want to say with my music, I sense that you understand me, and I feel even stronger now. I will continue to make my music, tell stories, and be part of this country.
See you in another exam…

Matiz remains very popular: Just one day after Aygun's statement, he received two awards in a competition based on the popular vote. He won in two categories, “Best Clip” and “Best Male Singer” at the 46th Pantene Golden Butterfly Awards. This seems to indicate that very large numbers of people support him against the homophobia expressed by the government and conservative citizens.

I received the “Best Male Artist” and “Best Video Clip” awards at the 46th Golden Butterfly Awards, I am happy! Thanks to all my dear listeners! I would like to extend my thanks to Erhan Arık and DOP Meryem Yavuz, the precious directors of [my song] “I Have a Red in My Wipe” clip.