Your guide to the 2019 Sri Lankan presidential election

The campaigning has largely focused on national security and religious extremism Sri Lankans are going to the polls on 16 November 2019 to elect a new president after weeks of campaigning which largely focused on national security and religious extremism. The country is still rattled from the Easter Sunday bombings of April 2019 which were inspired by the Islamic State and killed over 250 people.

The political infighting among the ruling national coalition of Sri Lanka Freedom Party (SLFP) and the United National Party (UNP) came to a head on 26 October, 2018 when President Maithripala Sirisena ousted Ranil Wickremesinghe, the country’s prime minister, and replaced him with former president Mahinda Rajapaksa, triggering a constitutional crisis. Order was restored following court rulings and Wickremesinghe was reinstated as prime minister on 16 December 2018.

Major Players in the 2019 Election: 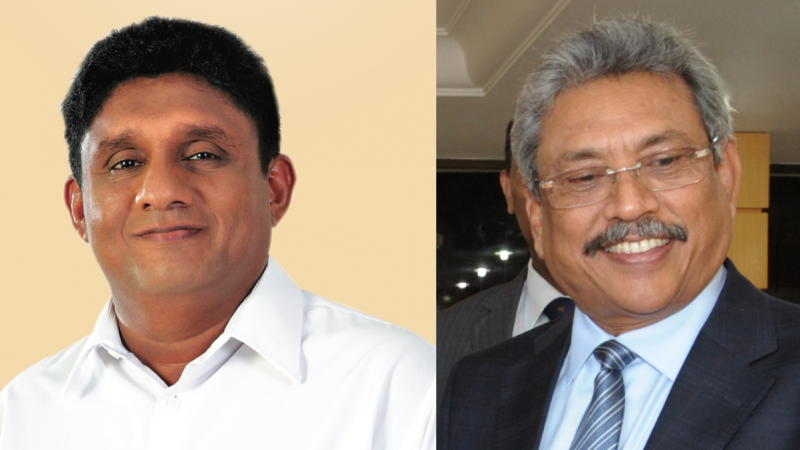 The incumbent President Maithripala Sirisena is not seeking re-election, and his Sri Lanka Freedom Party (SLFP), which has a significant voter base, has not officially endorsed a candidate. In September Siresena announced that he would join a coalition, and on 9 October it became clear that he would be backing Rajapaksa's SLPP.

Gotabhaya Rajapaksa played a leading role in crushing the Tamil rebels and putting an end to the 30 year-long Sri Lankan civil war. He is often criticised for his alleged role in torture, murder and other human rights violations during the civil war. Amresh Gunasingham writes in the Diplomat:

Gotabhaya Rajapaksa is unpopular in Tamil majority areas in the north and east of the country, over his handling of the civil war. The Muslim community, on the other hand, might be divided, analysts say. As such, Rajapaksa would need to carry a significant proportion of the Sinhalese vote, although even here, such calculations are complicated by Premadasa’s reputation as a grassroots politician which may resonate with the rural masses among the majority Sinhala Buddhists.

Gotabhaya Rajapaksa's popularity as a presidential candidate has increased since the emergence of reports that the current government failed to prevent the Easter Sunday terrorist attacks despite receiving prior intelligence warnings. His opponents, however, raised questions about irregularities surrounding the renunciation of his United States citizenship.

Rajapaksa is deemed pro-China and wants to restore relations with that country. Rajapaksa also said that he will not recognise an agreement the government made with the United Nations Human Rights Council to investigate alleged war crimes during the nation's civil war.

Sajith Premadasa, the son of former President Ranasinghe Premadasa, who was assassinated in 1993, is a favourable choice for Tamil and Muslim minorities, who represent a quarter of electorate. His campaign promises tougher laws to tackle religious “extremism” and “terrorism”, to eradicate poverty, and improve housing in the country under a slogan of “shelter for all by 2025.”

There is one notable rule in this election: “If no candidate wins more than 50% of the vote, the winner among the top two is determined after tallying the preferences of voters who backed all the other candidates.”

A total of 80 observers from the member states of the European Union will be monitoring the election in all the nine districts of Sri Lanka. The Commonwealth Observer Group (COG) has also sent a team to monitor the elections.

More than 1,300 Sri Lanka Transport Board (SLTB) buses would be assigned for election duties according to based on a request by the @ECSriLanka . #SriLanka ?? #PresPollSL ? pic.twitter.com/a0u5MdGSJS

The Center For Monitoring Election violence is also looking at the election spending of the various parties:

Sri Lankans will vote on Saturday 16th November 2019 for a new President. Follow the guidance in these tip sheets for documenting potential electoral violations with your camera or smartphone!#lka #SriLanka #PresPollSL #video pic.twitter.com/5VjqT7OrRi