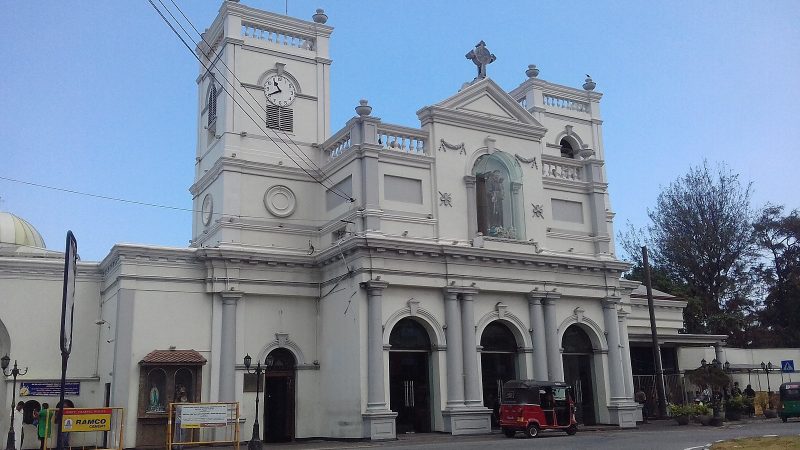 The historic St. Anthony's church at Kochikade in Colombo is a popular destination for Sri Lankans and tourists. More than 50 people died here in the morning of Sunday, April 21, 2019. Image by AntanO via Wikimedia Commons CC: BY-SA 4.0.

Sri Lanka was rocked by series of eight blasts on Easter Sunday morning (21 April 2019) in locations including churches and hotels across the country, leaving at least 207 people dead and more than 450 injured.

The six explosions in the coordinated bombings targeted churches packed with worshippers who were attending Easter Sunday services. These include St. Anthony's church at Kochchikade in Colombo, St. Sebastian's Church in Negombo, and Zion Church in the Tamil-dominated city of Batticaloa. At least 67 people died at St Sebastian's church alone.

The bombings also targetted luxury hotels in the capital city, Colombo — the Cinnamon Grand, the Kingsbury, and the Shangri-La, where at least 35 foreigners were killed.

35 foreigners among the victims of the bomb blasts in Sri Lanka.
Among the victims are nationals of; #USA, #Denmark, #China, #Japan, #Pakistan, #Morocco, #India and #Bangladesh – National Hospital Spokesperson.#lka #SriLanka

The seventh blast was at a small hotel in the suburb of Dehiwala in capital Colombo.

2 dead in an explosion took place inside a small hotel in Dehiwela pic.twitter.com/wR5wMinueb

The eighth blast was a suicide bomb in the Dematagoda district of Colombo which killed three police officers.

Minister @RWijewardene addressing the press just now says action will be taken to stop activity of all extremist groups in the country. Social media temporary banned. 12 hour curfew from 6pm. The Dehiwela n Dematagoda blasts seem to be by those in the ring running from the law.

No one has yet claimed responsibility for the attacks. However, reports suggest that they were the work of suicide bombers.

The Sri Lankan government has declared an islandwide curfew from 6 p.m. local time to the next morning. Additionally, social media sites including Facebook and Instagram were temporarily blocked to prevent the further spread of false news.

Please think before you share – here are some useful infographics to help identify #fakenews and #misinformation. #lka #srilanka pic.twitter.com/ELppQuSyig

However, Twitter was not blocked and is providing some useful information.

Archive of all #EasterAttackSL & #EasterSundayAttacksLK tweets at https://t.co/hBpmjSjukh Updated at least once every hour, for at least the next week. #lka #srilanka

Sri Lanka is a multi-ethnic and multi-religious country. Sinhalese (74.8 percent) constitute the largest ethnic group in the country, followed by Sri Lankan Tamils (11.2 percent) and Sri Lankan Moors (9.2 percent). In terms of religion, Buddhists (most of the Sinhalese ethnic group) comprise 70 percent of the 22 million population followed by Hindus (13 percent), Muslims (10 percent) and Christians (7 percent).

The country suffered a three-decade-long civil war between government armed forces and separatist Tamil militant group Liberation Tigers of Tamil Eelam (LTTE) which ended in 2009. The bombings have reminded citizens of the attacks of those times.

Defence Minister Ruwan Wijewardane vowed to take all necessary action against any extremist group that is operating in the country. He also echoed the response of the New Zealand government after the Christchurch shooting last March:

Cardinal Archbishop of Colombo Malcolm Ranjith urged the people of Sri Lanka not to spread “hearsay” and to “wait patiently and work for peace and harmony”.

I think Srilanka must take a lesson from New Zealand. Let there be zero free coverage for the heinous terrorist outfit whose ultimate aim would've been the publicity. Focus on victims and the people uniting . Let them be the NEWS…

People flocked to the hospital to donate blood:

Just returned from Batticaloa hospital where I witnessed incredible sorrow but also people of all faiths and ethnicities working together to respond to the victims of today’s church bombing. Several referenced their own personal and collective histories of loss as they worked.

Touched to see the condolences coming in from all around the world.
At such a state, let us Sri Lankans not get divided ♥️#EasterSundayAttacksLK #srilanka