“The people's voices” prevail: Sri Lanka's prime ministerial crisis to be put to a parliamentary vote 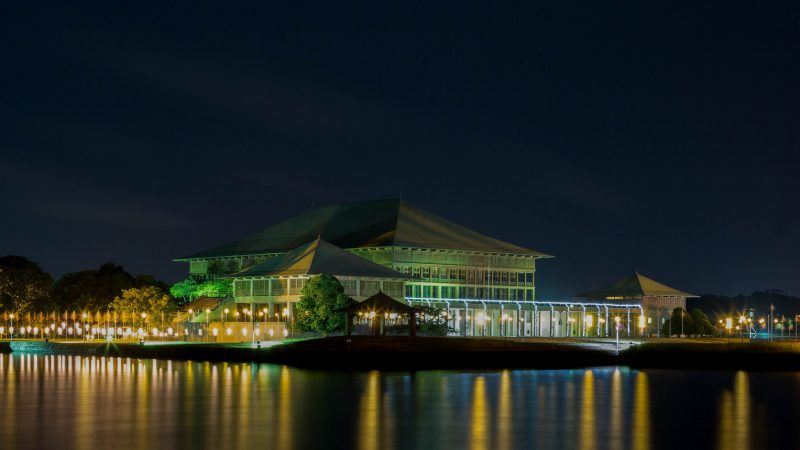 The Parliament of Sri Lanka. Image from Flickr by Kolitha de Silva. CC BY 2.0

Since October 26, when Sri Lankan president Maithripala Sirisena ousted Ranil Wickremesinghe, the country’s prime minister, and replaced him with former president Mahinda Rajapaksa, the ensuing political crisis has many in the country analyzing the constitutional legitimacy of appointing a prime minister without wider consent. The president also suspended the country’s parliament for three weeks and dissolved the cabinet of ministers.

On October 30 and 31, in response to the questionable legitimacy of Wickremesinghe's removal and the temporary suspension of Parliament, thousands took to the streets of Colombo to demand that Parliament be reconvened in order to resolve the ongoing political crisis.

Thank you! Tens of thousands of people thronged the entrance to Temple Trees. They were orderly, not drunk and didnt climb lamp posts. They came only to demand that #SriLanka parliament be summoned and dislodge #FakePM. Huge success. @MaithripalaS don’t trample democracy. @RW_UNP pic.twitter.com/RS1fh37d2N

Live updates from the people's protest at the Liberty Plaza roundabout calling for the re-convening of Parliament #lka #srilanka #Democracy #ConstitutionalCrisisSriLanka #CoupLK pic.twitter.com/e9gAvqEMfL

In a news conference, Speaker of Parliament Karu Jayasuriya urged the president to let Wickremesinghe prove his majority support on the parliament floor, and warned of a bloodbath if the impasse continues.

Pressure from protests to reconvene Parliament have borne fruit, as Sirisena has scheduled a parliamentary vote to decide who is the lawful prime minister on November 7.

The events of the past few days have stoked fears among some Sri Lankans of a return to the period of Mahinda Rajapaska's presidency, when sectarian violence, state-sponsored repression and censorship were rife. As a group of students has noted in a statement on the matter published by GroundViews:

The resort to violence and coercion is a chilling reminder of what dictatorship looks like. The coup is being followed by a return to the norms of self-censorship, violence, and fear that were characteristic of Rajapaksa-era politics. State media institutions were stormed in the night and security for the Prime Minister and Ministers  arbitrarily withdrawn. Moreover, many private media stations are already becoming vehicles for misinforming the public and spreading disinformation.

Sirisena told reporters that he removed Wickremesinghe after discovering that the latter was involved in an assassination plot against him. But it is believed that the current situation is, in fact, a by-product of the existing power struggle between Sirisena, Wickremesinghe, and Rajapaksa.

In January 2015, then-President Mahinda Rajapaksa called for a presidential election in a bid to consolidate his power and to seek a third term in office. Sirisena, a former minister in Rajapaksa’s government, defected from Rajapaksa’s Sri Lanka Freedom Party (SLFP) and was nominated as a candidate by the Wickremesinghe-led United National Party (UNP) to contest the presidency against the incumbent. Sirisena emerged the surprising winner—securing 51.28% votes against Rajapaksa’s 47.28%—and took over as the new president of Sri Lanka.

After the election, Rajapaksa handed over leadership of the SLFP party to Sirisena in accordance with the party's constitution, which states that any member who is President is automatically leader of the party. During the parliamentary elections in August 2015, Siresena's and Rajapaksa's factions joined forces to contest the election under the banner of the United People’s Freedom Alliance (UPFA). Wickremesinghe's UNP-led coalition, however, won 106 seats out of 225, with the UFPA winning 95—55 by the pro-Rajapaksa faction, and 40 by the pro-Sirisena faction.

After the parliamentary elections, Sirisena appointed Wickremesinghe prime minister and created a National Government after signing a memorandum of understanding in order to address issues which were not resolved after the end of the 30-year ethnic conflict. Since then, the Rajapaksa-led SLFP faction has been the de-facto opposition party.

Over the past two years, however, Rajapaksa has been gaining significant ground, and his party swept the local elections in February 2018. In April 2018, Wickremesinghe survived a no-confidence motion in Parliament brought by supporters of Rajapaksa, a move clearly meant to weaken the already unstable ruling coalition.

The growing popularity of Rajapaksa's SLFP party and existing tensions between Sirisena and Wickremesinghe over the latter's leaning towards India as a geopolitical partner instead of China, may be one of the many reasons that Sirisena has chosen to appoint Rajapaksa as prime minister.

“The people's voices have been heard. . . ” Wickremesinghe stated optimistically on Twitter on November 1, after it was learnt that parliament would be reconvened next week. “Democracy will prevail.”