As Ukraine and Russia exchanged prisoners, the RuNet reacted

Ukrainians have mixed feelings about how their government handled the exchange 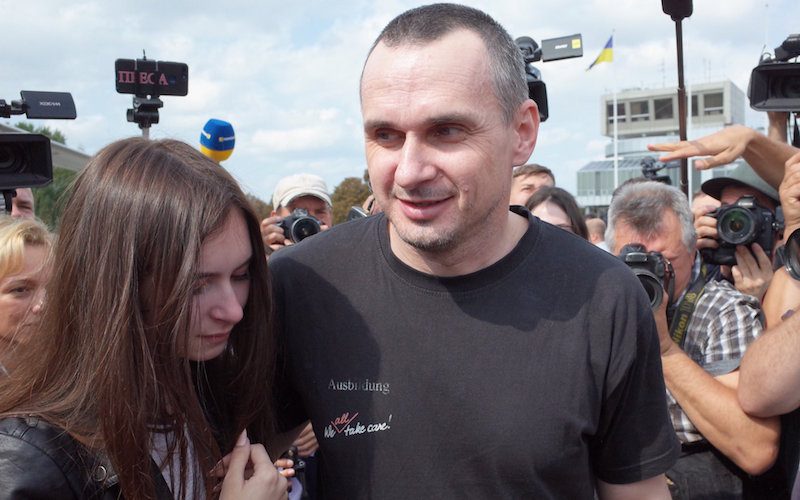 Oleg Sentsov, the Crimea-born activist and filmmaker, with his daughter at Kyiv airport after his release on September 7, 2019. Photo courtesy of Christopher Miller. Used with permission.

When the 35 Ukrainian prisoners arrived at Kyiv’s Boryspil airport on Saturday, September 7, their family and friends were already waiting to welcome them home. Ukraine’s President Volodymyr Zelensky shook hands with each of them as they stepped off the plane, while journalists scrambled for interviews and photos. Meanwhile, 35 prisoners released from Ukraine touched down at Moscow’s Vnukovo airport with much less fanfare.

Before the arrival of the exchanged prisoners, journalists arrived at the respective airports ready to broadcast their homecoming. On social media, journalists, politicians, friends, family members and even the prisoners themselves shared photos and updates of the events. Ukraine’s President Zelensky tweeted simply “ours are home!”

The group returning to Kyiv consisted of 24 Ukrainian sailors captured by Russia during the Kerch Strait incident last November, as well as 11 Ukrainian political prisoners arrested between 2014 and 2018. Among them were high-profile detainees such as Crimean-born filmmaker and activist Oleg Sentsov, Crimean Euromaidan activist Oleksandr Kolchenko, the Ukrainian journalist Roman Sushchenko who was arrested on spying charges while visiting relatives in Moscow in 2016, and 21-year-old Pavlo Hryb, who was abducted in Belarus as a teenager. Sentsov attracted the most media attention as he reunited with his family on the runway, hugging his 17-year-old daughter Alina, who was 12 at the time of his arrest.

In comparison, the Russian media’s coverage of the swap was more low-key. The former prisoners came off the plane in Moscow carrying their own bags. And although there were 34 others being returned, the spotlight was trained on Kirill Vyshinsky – the former editor-in-chief of Russia’s RIA Novosti news agency in Ukraine. Vyshinsky was arrested in Ukraine in 2018 on charges of treason, but was released pending trial on August 28 after serving a year and three months in prison.

Margarita Simonyan, an editor of RT, lauded Vyshinsky’s homecoming in a Telegram message.

In my ranking of attractive men today [there is] only Kirill Vyshinsky. He didn’t flinch, he didn’t bend, he didn’t even sway. He didn’t raise an eyebrow. He served 470 days with the prospect of never getting out of prison at all – and here he is, returned. Happy, calm, grateful to everyone who helped. This is exactly how men should be.

Some Russians following the events seemed a little uncomfortable with the focus on Vyshinsky:

It’s a bit of a shame for the others. I’m watching the livestream now and everyone is clamouring around Vyshinsky. It’s not nice, really not nice. They just don’t even notice the others. [The others] are even trying to keep out of the frame, so as not to mess up the shots.

The other released Russian prisoners might have had a good reason to keep out of the spotlight.

Although a full list of who was returned to Russia had not been revealed at the time of the exchange, this did not stop photos of the prisoners from appearing online. When Simonyan shared a group photo of some of the prisoners on Twitter, Runet users were quick to point out that many of their faces were blurred, and wondered what the men might have to hide. Others speculated that the men’s involvement in the war in eastern Ukraine could still cause them problems travelling overseas in the future. In any case, the Russian Embassy in Ukraine shared an uncensored version of the photo later that day.

Some prisoners even took to social media to share photos of themselves prior to their departure from Ukraine. Igor Kimakovsky, a Russian volunteer fighter who was detained in eastern Ukraine by the Ukrainian authorities in 2015, wrote that “Kirill Vyshinsky and Vladimir Tsemakh are on board our plane! We’re flying home!” in one of his pre-departure posts on his Telegram channel, Zhelezny Zek.

When asked why the Russian president did not greet the released prisoners up their arrival in Moscow like Zelensky did in Kyiv, Russian Press Secretary Dmitry Peskov told the TASS News Agency on September 9 that it “wasn’t the head of state’s prerogative” and that Putin had done his part by ensuring that the exchange took place. Ilya Barabanov, a Russian journalist working with the BBC, reflected on the lack of fanfare in Moscow on his Telegram channel:

Those who were handed over to Moscow were only met by FSB buses inside the Vnukovo-2 airport and a crowd of journalists outside its gates. Nobody bothered to gather relatives so they could meet their loved ones, or even warn them [that they were coming.] I was in contact with Vladimir Tsemakh’s daughter and Viktor Ageyev’s mother all morning; they only heard the news from me or from the television.

While many are heralding the successful return of Ukrainian prisoners as a political win for president Zelensky, the exchange has been anything but uncontroversial.  The decision to release Tsemakh, a former air defence commander for the self-proclaimed Donetsk People’s Republic and suspect in the downing of Malaysian Airlines flight MH17 over the Donbas in July 2014, has attracted a lot of criticism. Dutch prosecutors and members of the European Parliament urgently appealed to Kyiv not to hand Tsemakh over to Russian custody, arguing that he is a key witness in uncovering the truth about a tragedy which claimed the lives of 283 passengers. In the government’s defence, Zelensky told the press that Tsemakh had been thoroughly questioned before he was exchanged.

As Svitlana Zalishchuk, a Ukrainian civil society activist and journalist who was recently elected as a parliamentary deputy for Zelensky’s Servant of the People party, noted:

Witness #Tsemakh release may worsen Ukraine's relations with partners, whose citizens died in MH17, and may impact other Ukrainian lawsuits against Russia in the International courts. https://t.co/60qJEmSpXS

Furthermore, Ukrainian political scientist Anton Shekhovtsov criticised the Ukrainian security services’ conduct in the arrest of Tsemakh. “Instead of quietly transferring Tsemakh to the Netherlands, the SBU childishly boasted about his arrest and made him a person of great interest to the Russians who are rightly afraid of what Tsemakh can potentially tell the investigators. […] And now the Russians are apparently threatening to cancel the exchange of Ukrainian and Russian prisoners if the Ukrainians do not give up Tsemakh,” wrote Shekhovtsov on Facebook on September 30.

However, the fact that the exchange happened at all came as a relief after the events of August 29, when it was falsely reported that the exchange had already taken place. The family members of the Ukrainian political prisoners flocked to Kyiv’s Boryspil airport, only to leave disappointed hours later. Incorrect information about the day and time of the prisoners’ arrival began to spread online due to a now-deleted Facebook post from Ukraine’s Prosecutor General Rouslan Riaboshapka, in which he shared another post from Ukrainian lawmaker Anna Islamova. Islamova’s post, announcing that the exchange had been completed, has also been removed from Facebook but is still circulating in screenshots online.

On the morning of August 30, the office of the Ukrainian president dispelled any confusion about the status of the exchange on Telegram, stating: “The process of mutual release of detained persons is ongoing. The information about the completion is false.” It then stressed the importance of combating disinformation in such cases:

This is not the first time we’ve seen information chaos caused by references to unconfirmed information and numerous “sources.” We urge [everyone] to understand the consequences of misinformation: it’s a game with the public’s emotions. When the mutual release of detainees is complete, the Office of the President will report on this on official channels.

#Ukraine‘s new gvrnmnt's lack of political experience is evident from their carelessness in manipulating information. 1st someone on Zelenskyy's team shares incorrect information about the resignation of the President's Chief of Staff, now new PG posts about release of 24 sailors

Following the exchange, Russia’s President Putin had a phone conversation with President Zelensky. According to a Facebook post from the President of Ukraine’s Office, the two sides were “satisfied with the implementation of the results of the agreement” and saw it as a “first step on the path to the normalisation of dialogue.”

As the conflict in eastern Ukraine continues to simmer, it is unlikely that this will be the last such exchange between Kyiv and Moscow. In fact, on September 13, president Zelensky told participants of the Yalta European Strategy (YES) Forum in the Ukrainian capital that he was “waiting for the next phase of the exchange.”