The murder dealt another blow to women and media workers. 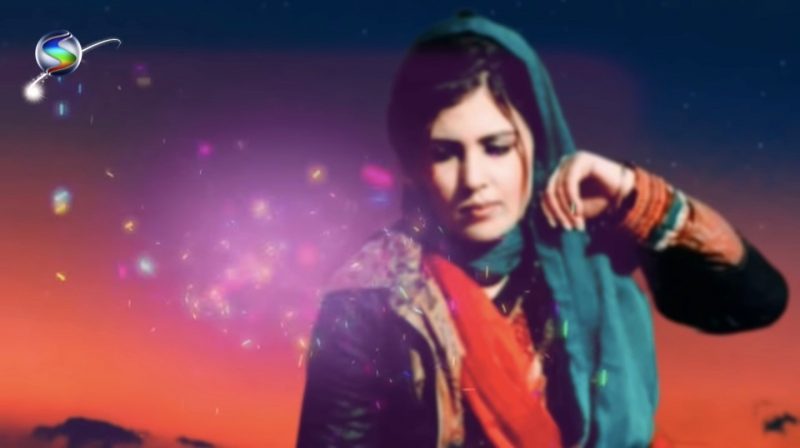 Mina Mangal. Screengrab from a video published on the Suhrab Samadi YouTube channel on May 11.

As conflict and insecurity layers doubt over Afghanistan's recent achievements, the figure of Mina Mangal stood tall as a marker of progress — until she was killed, on May 11.

At the time of her death, 30-year-old Mangal was serving as an advisor to Afghanistan's lower parliamentary chamber, and had ambitions for a career in politics.

But she was better known to Afghans as a television presenter for three private channels — Lemar TV, Shamshad TV and Ariana TV — where she presented a number of culture programmes, and, for Ariana, a programme on women's rights.

Independent channels like these have helped to reshape the country's media landscape following the information vacuum during Taliban rule.

While is still not clear who gunned Mangal down in an eastern neighbourhood of Afghanistan's capital Kabul at around 7.30 that morning, Mangal's father, Taleb Jan, told the BBC he believed the murder was the result of a “family dispute issue” after her separation from her former husband.

The Nai Media Institute demanded that Afghanistan's government clarify whether or not Mina's murder was connected to her professional activities.

But regardless of the motive, Taleb's call for authorities to “protect my other daughters and women like them who come out of the home and serve our society” cuts to the heart of public uproar over the murder.

So sad to hear, Journalist& Advisor to the Parliament #MinaMangal assassinated today in Kabul by unknown person. She was a strong self made woman; RIP #Mina. She isn’t the 1st and wouldn’t be the last lost(unfortunately). Serious protection 4 female journalists! Is what we need pic.twitter.com/6g205oQDA5

A face on television

Mangal was already a prominent media personality prior to her appointment as a cultural advisor to the Wolesi Jirga, Afghanistan's lower house of parliament, in 2017.

Born in Paktia province in 1989, she spent nearly ten years working for media after training as a midwife.

She had recently enrolled in university again to achieve another bachelor's degree, this time in law and political science.

#MinaMangal was a known #journalist in the country which shot death by unknown gunman today. I hope she Rest In Peace, I am really sorry for her?, no one is able to quite us, we are committed to our work more than past.@UNDPaf @UNDPasiapac @NPeaceNetwork #Afghanistan https://t.co/SXTAlrYe90

Completely shocked by the assassination of former TV journalist #MeenaMangal perpetrators must be taken to court. pic.twitter.com/O09WoMPllL

Mangal had written on Facebook as recently as May 2 that she had received threats, but did not indicate the source. 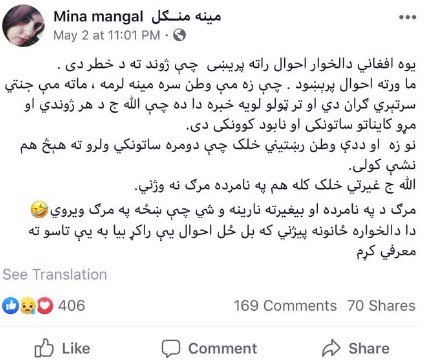 A stupid man let me know that (my life) is under threat. I told him that I'm in love with my country and that the most important thing is that we come from God and will return to Him, and that with God's greatness no-one can harm me and my great nation. Death to those men who are threatening women. These morons know who they are and if they threaten me again I will introduce you to them.

Her father has publicly alleged that her former in-laws kidnapped her on one occasion.

Afghanistan's Minster of Mining and Petroleum Nargis Nahan tweeted that she was working with other top officials on policy measures to protect threatened women:

Hassina Safi, Minster of Culture and Information, Shahzad Akbar, Deputy Head of Security Council and I are working on a measure to ensure security for women faced with threats.

The tragic death of a public figure who was both a woman and a journalist has ignited debate about protections afforded to both groups.

#Farkhunda was burned to death, #BabyMahsa was kidnapped, raped & killed, #BibiAyesha nose was cut, Women got stoned and today #MinaMangal shoot 9 times. All these crimes took place mainly during the day & mainly in the green zone capital city of #Kabul. #StopKillingWomen pic.twitter.com/X1MUf64fNP

In May 2019, leading private news agency Tolo News reported on the case of a pregnant woman, Parisa, who was allegedly thrown out of the sixth floor apartment window by her husband and his family. According to the report Parisa had been kept by her in-laws in slave-like conditions prior to her death and was unable to visit her own family.

Such stories resonate strongly in a society where media consumption is growing rapidly.

But while the influence of online and television media in Afghanistan is indisputable, so are the daily security nightmares which journalists face day in day out.

Earlier this year, two unidentified gunmen entered a local radio station in Takhar province and proceeded to open fire on the two journalists in the building.

Acting news editor Shafiq Arya, 28, and programme presenter Rahimullah Rahmani, 26, died instantly. Several men were arrested by the police, who have not clarified the motive for the attack.

A report by Reporters Without Borders released in April indicated that 2018 was the deadliest year for journalists working in the country since the fall of the Taliban, with 15 journalists losing their lives to bombings and targeted killings.