During the World Cup, Mexico gets in trouble when their fans’ chants are called ‘foul’ 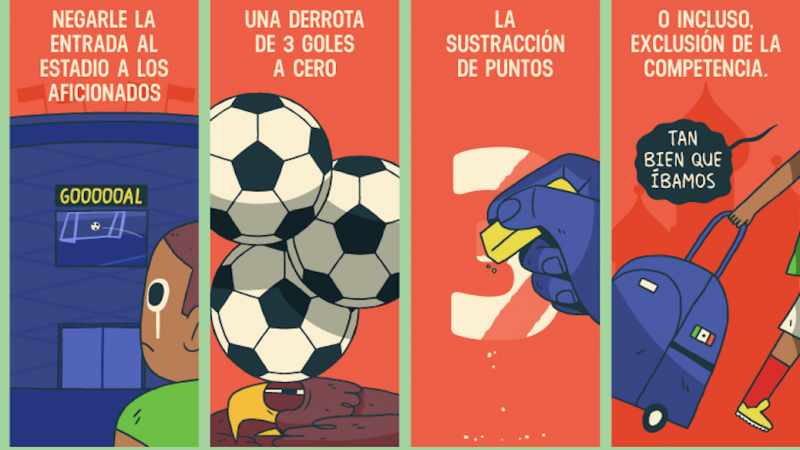 Detail from an infographic describing the Mexican team's possible consequences for violating FIFA's rules regarding the homophobic language used by their fans during the World Cup. Used with permission by Pictoline.

As Russia hosts the final days of the FIFA World Cup 2018, Mexico's team has drawn the attention of the Federation of International Football Association (FIFA) organizers and the press, but it's not for their stellar skills, but rather their fans’ foul calls. Did Mexican fans violate FIFA rules, or were they just celebrating their favorite team?

After the Mexico national team (known as “El Tri” because of their tricolor uniform that mirrors the colors of the national flag) played their first game against Germany, FIFA announced the opening of a disciplinary case against chants used by their fans during the game.

El Tri fans customarily scream the word ‘puto’ (Mexican Spanish for ‘faggot’) in unison every time the rival goalkeeper restarts a play by putting the ball in motion (especially through a goal kick).

Deutsche Welle, the German media outlet with a global presence, reported the offenses by Mexican fans in this way:

Offensive or just an expression?

The term ‘puto’ is essentially pejorative, vulgar and degrading. In daily language (in every social class in Mexico) it is also used as an insult to describe a gay male or a female perceived as promiscuous or engaged in sex work. This is consistent with definitions provided by Fundéu, the regulatory authority on Spanish language in mainstream media, and the Royal Spanish Academy of Language. The Mexican Federation of Football, however, maintains the opposite position, denying that the expression is insulting.

It is not the first time that the Mexico national team finds itself embroiled in this controversy. Four years ago in Brazil, Mexican fans also shouted this chant on several occasions. The same happened in 2017, also in Russia, during the Confederations Cup organized by FIFA.

The website Reporte Índigo has gathered opinions from different Mexican personalities (all male) about the controversial chant. Global Voices selected two as an example:

No, ‘puto’ is not discriminatory, ‘puto’ is a word from the Nahuatl language, which is ‘putozin’ and it means ‘the one who reads it'…it is a joke (laughs) [Referring to a common joke seen online saying ‘the one who reads this is ‘puto’]. Of course it is discriminatory. I have had problems with that word since the very popular song by the group Molotov (the song ‘Puto’). I didn't like that song, I don't like it, I think we have to take care of the language we use, hate speech. For example, violence against women won't end with any kind of law if we don't change our culture and culture begins with how relate to each other, how we speak, what words we use, and we have to be aware of them. I believe.

I don't think screaming ‘puto’ to the enemy's goal keeper has homophobic connotations, it is simply a slur, an insult to destabilize the enemy. I hope that it is also chanted on September 16 [the day that Mexicans celebrate independence] in front of the governmental palace, no? It seems to me that this is being blown out of proportion, the politically correct rarely corresponds to the politically fair and real.

According to Andoni Bello, head of the Gay Football Selection (Or Tri Gay, an organization defending LGBTIQ rights), the screaming ‘puto’ is offensive, and suggested that fans should find other ways of giving a hard time to rival teams.

According to FIFA rules, as shown in the infographic created by Pictoline (a visual graphics company), sanctions relating to the use of homophobic or racist expressions can affect El Tri's outcome in the World Cup, either by accrediting defeat, subtracting points obtained, or in the worst case, expelling them from the competition: 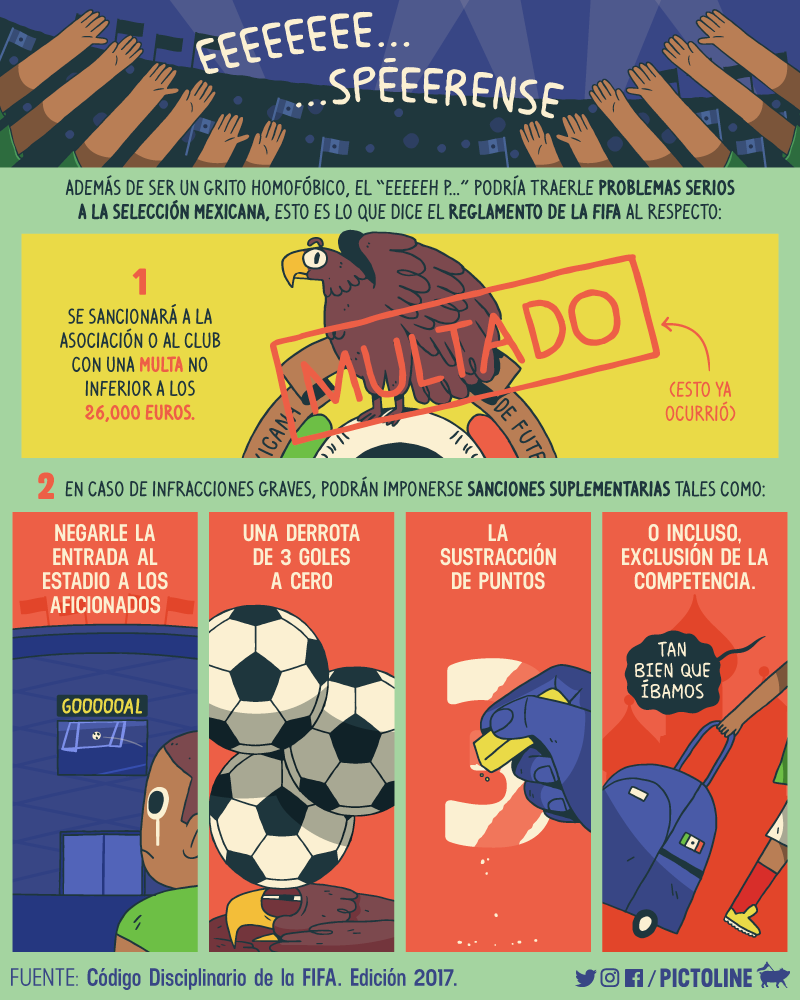 Infographic regarding homophobic expressions chanted by Mexican fans at the FIFA World Cup in Russia 2018, shared by Pictoline, used with permission.

In addition to being considered a homophobic scream, the “EEEEEH P…” could cause serious problems for the Mexican National Team. This is what the FIFA rules state:
1. The association or the club will be sanctioned with fine of no less than 26,000 euros [$30,275 United States Dollars] FINED: (this has already happened).
2. In the case of serious violations, supplemental sanctions could be levied such as:
a. Bar fans from entering the stadiums.
b. A defeat of three goals to zero.
c. The subtraction of points.
d. Or even exclusion from the competition (and we were doing so well!).

Through Twitter, fans have been asked not to repeat this insult in subsequent El Tri games:

Returning to the field

Before the start of the worldwide joust, El Tri had achieved 15th place out of 209 positions in the FIFA global ranking. Mexico has a good chance of winning as long as their fans can “show that [they] can behave [themselves].”