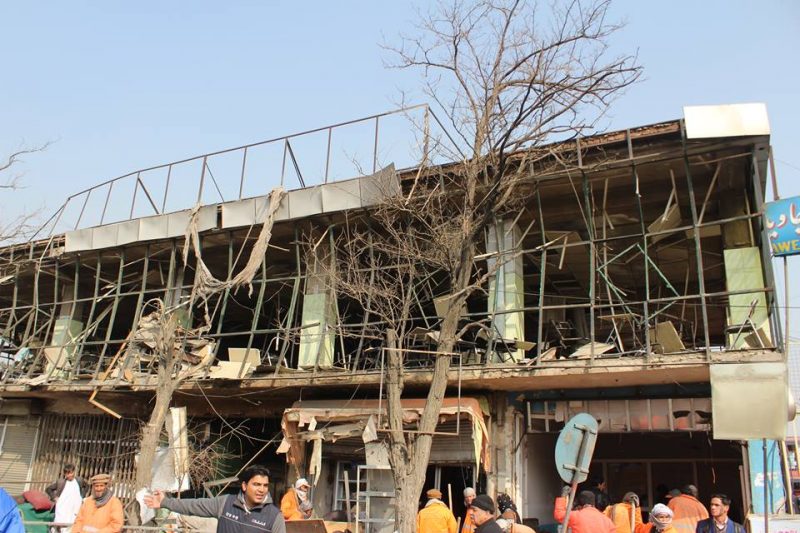 A damaged building in the center of Kabul after it was struck by an ambulance packed with explosives. Photo courtesy of Fatima Faramarz. Published with permission.

As deportations of Afghan asylum seekers from the West continue apace, the country's capital Kabul is fast turning into a death trap.

In January alone, close to 150 people died in attacks in the city attributed to either the Taliban or local groups affiliated with ISIS.

The hashtags #KabulBleeds and #Afghanistanisnotsafe have become regular sights on social media timelines. Nevertheless, nothing has moved governments in Europe to soften their positions on the desperate refugees seeking a way out.

Global Voices decided to look at just five of the deadliest attacks to strike the Afghan capital during the last year, as well as the reactions of residents of the city.

The new year has brought little cheer to Kabul, a city of 3 million. On January 27, an ambulance bomb blew up in a crowded location in the city centre, killing at least 103 people, and leaving 235 others wounded.

The Taliban group claimed responsibility for the assault on civilians. It is not known how the group commandeered the explosives-packed ambulance.

Following the attack, journalists began counting the dead and tweeting.

How badly is Afghanistan bleeding?
Over the past year, about 10,000 security forces killed, more than 16,000 wounded. Taliban losses estimated to be about same, if not more.
An average of about 10 civilians killed every day (UN data, 9 months of 2017)https://t.co/DcTDVtro8z

In one week, Taliban and ISIS in Afghanistan have attacked an intl NGO working for children, a civilian hotel and 60+ civilians in Kabul without a govt/military target in sight. Is there a goal here beyond spreading chaos and creating headlines?

The bombing was the second major attack targeting civilians in the city since the new year.

Some Kabul residents have resorted to keeping a short note on their person with essential information in order to help identify their body in the event of a blast.

An attack, they reason, could happen anytime, anywhere.

On January 20, gunmen broke through the security barriers of the luxury Intercontinental Hotel and sprayed bullets at guests and staff.

Survivor accounts testify that attackers went through as many rooms in the building as possible to maximise the kill count.

The fact that 15 of the victims were foreign guests guaranteed intensified coverage from Western media.

In total the Taliban-claimed assault killed at least 40 people.

The firefight between the gunmen and security forces lasted half a day and shocked Kabulis living in and near one of the city's most prestigious neighbourhoods.

How can one nation suffer so much, how can killing never stop, and how can the ones killing us never get tired #KabulAttack #Afghanistanburning

Among the foreigners killed were employees of airline Kam Air, Afghanistan's most important domestic airline.

The airline mourned its employees during a ceremony at Hamid Karzai International Airport — the same destination Afghan refugees arrive at when sent home from Europe.

In October 2017, a suicide bomber blew himself up close to a Shia mosque in the western part of Kabul. The suicide bombing killed 56 people and hurt 55 others.

2. in a week. Our hearts are bleeding. #AFGHANISTANISBLEEDING

That was less than two months after a group of gunmen claimed at least 30 lives during a raid on a Shia mosque in the northern part of the capital and wounded 80 others.

Although it is not known to what extent ISIS organised the attacks, it claimed responsibility for both assaults. The radical group that adheres to Sunni Islam is famous for its hatred of Shia Muslims.

Ethnic Hazara, who are overwhelmingly Shia, are a group that is particularly vulnerable to attacks due to the deeply sectarian beliefs of both ISIS and the Taliban.

In the most brutal attack of 2016, two suicide bombers ripped through crowds during a peaceful Hazara rally for greater political voice in July 2016. The attack claimed the lives of 85 protestors and injured about 300 others.

ISIS claimed that atrocity, too.

On May 31, 2017, a truck packed with explosives killed 150 people and wounded about 400. It was the most deadly single attack in Afghanistan since US-led forces toppled the Taliban in 2001.

The attack occurred on a traffic-packed street during the morning rush hour. In the “Green Zone” where the U.S. embassy, the local office of NATO and the Presidential palace are all located.

Let #Afghanistan heal! Fighting each other and losing precious lives is what the enemy wants! Come to your senses #Kabul. pic.twitter.com/ZiS0BKNzMp

No group claimed responsibly for the attack. But the Afghan government blamed the Haqqani Network, a Taliban faction that mainly operates from out of Pakistan.

The Sardar Mohammad Daud Khan militarily hospital that mainly treats wounded members of the armed forces is the best-equipped hospital in the city.

First, a suicide bomber self-detonated at the gate of the hospital. Then, three armed men combed the 400-bed complex shooting nurses, doctors, and patients. The ensuing firefight between the assailants and Afghan special forces lasted several hours.