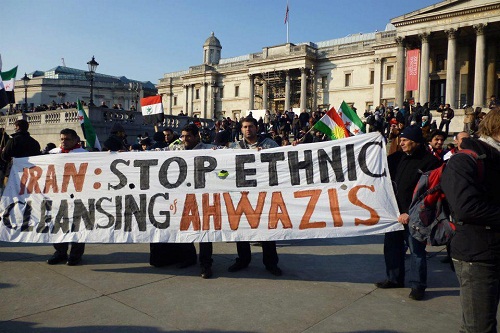 Ahwazi Arabs protest in London demonstrating against Iran's treatment of its Ahwazi population on 3 July 2016. Image from Peter Tatchell Foundation used with permission.

On August 31, an Iranian court sentenced two Ahwazi Arab men to death and six received imprisonments of three to 25 years for the crime of alleged membership in non-existent opposition groups.

The latest death sentences are part of an escalating wave of repression within Iran, which is now second only to China in annual per capita execution rates.  According to Amnesty International, the Iranian regime now executes an average of three people per day, including women and children, with the rates of execution being disproportionately higher against members of ethnic minorities such as Ahwazi Arabs, Kurds, Baluchis, Turks, and Turkmen.

The eight Ahwazi men sentenced on August 31 were primarily from the Ahwazi ancient city of Shush (Susa) and the surrounding area. All were reportedly subjected to torture that forced them to sign false confessions admitting they were the founders of the non-existent ‘Jund al- Farouq’ or ‘Soldiers of Farouq’ opposition group.

The name of this false group draws on long-standing tensions between Sunni and Shia Muslims in Iran. Shia Islam, and by extension the Islamic Republic of Iran, does not recognize the legitimacy of the Rashidun Caliphate of 634 B.C. Using the name “Soldiers of Farouq” also happens to be the nickname of Umar ibn Al-Khattab, the second Muslim caliph of Rashidun Caliphate.

Ahwazi Arab activists believe the regime fabricated the group to present the Ahwazi people as extremists associated with Saudi-led plots to disrupt Iran. These arrests signal Tehran's intention to undermine indigenous Ahwazi Arabs, leaning on their geopolitical narrative to protect Iran at all cost from Saudi encroachment. To this end, linking the Ahwazi to false opposition groups justifies the regime's crackdown on the group as a matter of ‘national security.’

Defendants were not allowed legal representation, and the verdict in the ‘Ahwaz Revolutionary Court’ was a foregone conclusion. The charges against all eight men were:

“Moharebeh [enmity to God] through the foundation of the Jund al-Farouq group, membership of opposition groups, and propaganda against the regime.”

Who are the arrested Ahwazi men?

Those sentenced to death are 36-year-old Abdullah Karamullah Ka’ab, married with three children, from the Shavur district, and 30-year-old Ghassem Abdullah from the village of Kaab Beit Allawi. The dates for the executions are unknown yet imminent. Their families are unaware of the legal process by which to appeal these sentences. 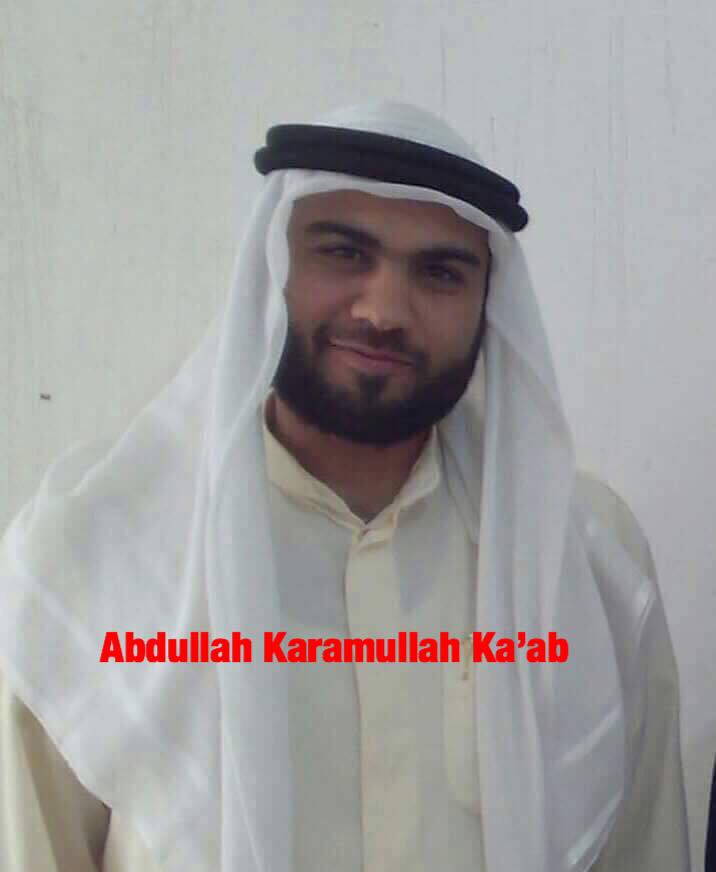 Abdullah was sentenced to death on charges of enmity to god through alleged membership in an Ahwazi opposition group. Image provided by the family for distribution.

Three other men all from the Shavur district were sentenced to three years each: Hassan Karmalachaab and Majid Beit Abdullah, both 24 years old and Issa Beit Abdullah, 30 years old.

The defendants were arrested in raids on their families’ homes by security personnel on October 16, 2015. Ahmad, Majed, and Abdullah were transferred to Masjid Suleiman Prison following an intensive interrogation.

All eight were later transferred to Shush headquarters of the Intelligence Directorate, infamous for torturing detainees. They were kept there incommunicado for the next two years and forbidden any visitation or communication with their families.

After the trial, the defendants were taken to the Intelligence Directoratecentertion center in Ahwaz City. 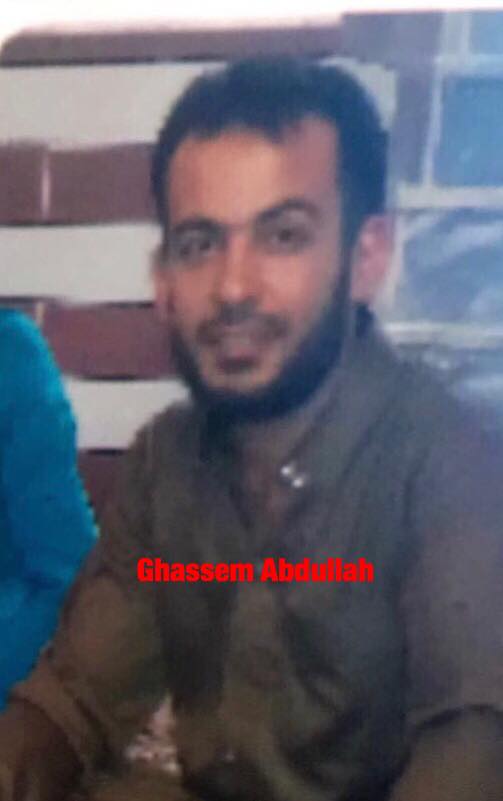 Ghassem Abdullah was the second Ahwazi sentenced to death for alleged participation in Ahwazi opposition groups. Image provided by family.

Families of the two defendants sentenced to death called for all human rights organizations to amplify their children's plight to the international community. They stated:

“our sons are innocent and the allegations against them by the Iranian judicial and security authorities are false.”

Karim Dahimi, an Ahwazi rights activist based in London who has been in touch with the families told Global Voices:

“The families of two political prisoners, Abdullah Karamullah Ka’ab and Ghassem Abdullah, were informed that they were sentenced to death by the First Branch of the Revolutionary Court for waging war against God, conspiring with foreign countries against the government, joining banned groups and spreading anti-regime propaganda.”

“Two years later, the men were taken to Isfahan province, where they were allowed a brief call to their families to inform them of their new detention location.  Their families sought to visit them there, but were denied any visitation rights. Recent information revealed that they were kept in solitary confinement cells run by the intelligence service branch in Isfahan.”

Iran's recent crackdown on the Ahwazi and other minority groups

In recent years, the government has stepped up its already brutal persecution of Ahwazi Arabs and other minorities in Iran, such as Kurds, Baluchis, Turks, and Turkmen.

This comes as the Third Committee of the United Nations General Assembly passed a resolution on November 14 condemning Iran for its widespread human rights violations, increasing executions and repression of ethnic and religious minorities.

Despite repeated calls by many international human rights organizations (including the United Nations, Amnesty International, and Human Rights Watch) to end its inhumane policies, the judiciary has actively accelerated and intensified its torture and executions of dissident and minority groups.

The current brutality recalls the era of Ayatollah Khomeini following the 1979 ‘Islamic revolution‘ when mass execution of dissidents and opposition politicians was first normalized.

The government also builds Persian-only settlements in the Ahwaz region, renamed Khuzestan in 1936, and forbids indigenous Arab peoples from living there. Ahwazis are denied jobs at oil and gas refineries in the region, which provides 95% of Iran’s oil and gas resources.

Despite vast resources and wealth claimed by indigenous lands, the Ahwazis often live in severe poverty.