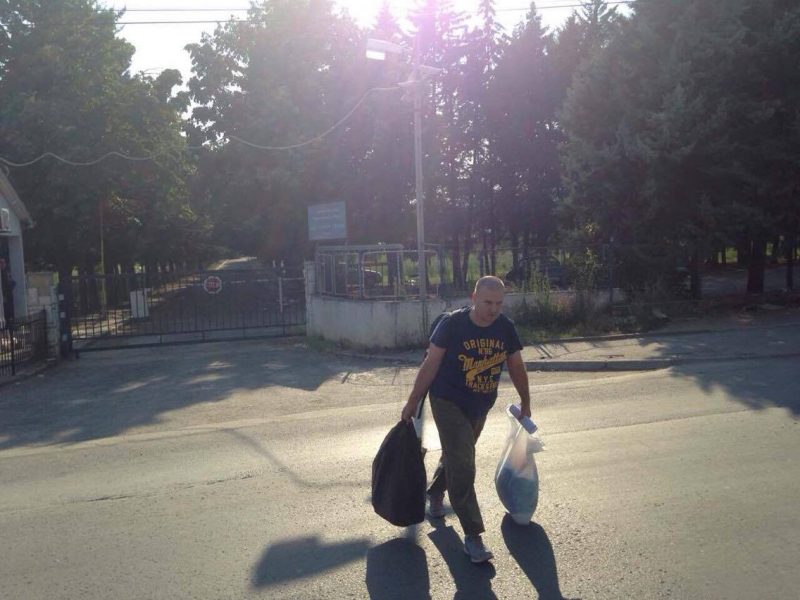 Zoran Božinovski leaving the prison, July 15, 2017. Photo by Association of Journalists of Macedonia, used with permission.

On July 14, the Skopje Criminal Court ended the 15-month detention of journalist Zoran Božinovski who was facing charges of criminal association, espionage and blackmail.

Božinovski was released at request of the Public Prosecutor’s Office.

He caught the wrath of authorities in 2012 when he became one of 18 defendants in a case code-named “Spy,” which accused a group of people — including former intelligence and police officers, the former director of the Office for Combating Money Laundering, and the former head of cabinet of the president of the Parliament — of spying on behalf of Greece and Hungary.

In 2013 Božinovski was arrested in Serbia where he had sought political asylum, and in April 2016 he was extradited to Macedonia.

The Association of Journalists of Macedonia (AJM) has struggled to secure the release of imprisoned reporters in Macedonia, including other high profile cases of “selective justice,” like Tomislav Kežarovski, who was sentenced to 4.5 years in prison in 2013, over a 2008 news article in which he revealed flaws of the government's investigation of the death of another journalist, Nikola Mladenov. He spent two and a half years in prison and house arrest until the Appellate Court reduced his sentence.

Božinovski's supporters claim the case against him is retaliation for Burevesnik.org and its implications for Macedonian political leaders.

After Božinovski's release from jail on July 15, AJM released a statement noting that Božinovski's detention made Macedonia the only country in the Balkans region with a journalist behind bars. “Keeping a journalist in detention for almost three years is absolutely unheard of in free and democratic countries,” the statement read.

“Bozinovski's release will separate Macedonia from the group of authoritarian countries in Europe, which includes Turkey, Russia and Azerbaijan, where journalists are constantly persecuted,” said AJM President Naser Selmanin.

Critics of the former Macedonian government, which ruled until May 2017, claim that the whole “Spy” case had been staged for domestic political purposes and selective persecution of individuals targeted by the regime. There is no public record of former government figures accusing EU members Hungary and Greece of undertaking hostile espionage activities towards Macedonia.

The former government, run by right-wing VMRO-DPMNE party, even boasted close ties with Hungarian PM Viktor Orban and gave him a medal of merit just months after it initiated proceedings in the “Spy” case.

On Reporters Without Borders’ World Press Freedom Index, Macedonia slid from 34th place to 123rd place within a period of only five years. Graph presenting the country rank and the average rank for the Western Balkans (WB) region by Metamorphosis using RWB data, via the Internet Freedom Network.

Macedonia suffered severe backsliding from democracy over the last decade, due to state capture performed by the ruling party. It received criticism from international human rights defenders, including the OSCE Representative for Freedom of the Media, for using the judiciary to silence independent media.

The new government has vowed to redeem these wrongs and bring the country back to the path of European integration through comprehensive reforms that will be overseen by the European Union. But the hurdles of bureaucracy, legal loopholes and entrenched support for the former regime within state institutions will make this a long road.