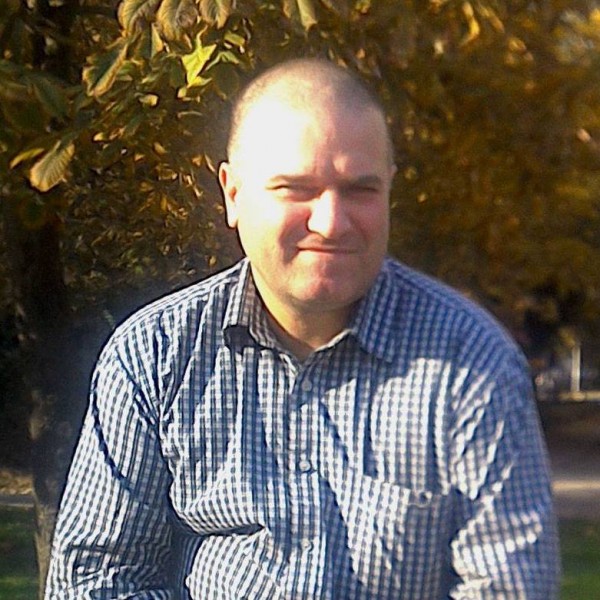 Zoran Božinovski. A photo circulated by his family via Facebook as part of appeals for his freedom.

Serbian authorities extradited journalist Zoran Božinovski, who sought political asylum in Serbia months before he was arrested on charges of espionage, extortion and criminal conspiracy, back to Macedonia on April 21. He is currently in a Macedonian detention center, and colleagues and family fear that his life and health could be in danger due to past threats of torture reportedly made against him by high-up politicians.

Božinovski owns the tabloid-style web portal Burevesnik.org, famous for publishing leaked information that seems to implicate prominent members of the Macedonian political elite in a variety of misdeeds.

In 2012 the Macedonian government run by the right-wing party VMRO-DPMNE started a court case code-named “Spy” (“Шпион” in Macedonian) accusing about 20 people, including government critics and whistle-blowers, for spying on behalf of EU members Greece and Hungary. Macedonia did not issue a diplomatic note to these countries for this alleged offence. In fact, three months later, Macedonian President Gjorge Ivanov gave a medal to Hungarian Prime Minister Viktor Orbán for being “a great friend and supporter” of Macedonia.

The government staged spectacular arrests of some of the accused suspects, leading to conviction of 17 people by October 2014. Božinovski, who emigrated in Serbia some time before for safety reasons, appealed for political asylum there. Macedonian authorities issued an international warrant leading to Božinovski's arrest in Serbia in November 2013. After more than 300 days in prison, he was released by the Serbian Court of Appeals while the case for his extradition continued to be processed.

Leaked wiretapped conversations published by Macedonia's political opposition in 2015 revealed some top politicians seemingly making threats of torture toward Božinovski. In a conversation between Martin Protuger, the right-hand man of Macedonia's then-Prime Minister Nikola Gruevski, and the then-Minister of Interior Gordana Jankuloska, the two discuss how to torture him once he's within their power. Protuger requests to pay him a visit “with the CCTV camera turned off in that time.” They also discuss arranging his rape by other inmates as something “that goes without saying.”

The Association of Journalists of Macedonia condemned the extradition, stating that it's “perverse” to extradite a journalist to a country where secret police illegally survey journalists and the president pardons such crimes (President Ivanov announced on April 12 he was granting a pardon to more than 50 top politicians and their associates who were under investigation over the revelations contained in the leaked wiretaps):

We believe that the prompt extradition decision of Serbian authorities is politically motivated and that it will cause serious damage to freedom of media not only in Macedonia, but in the wider region also.

With this extradition, Serbia consciously exposes the journalist Božinovski to unnecessary risk, even though they were previously informed about the threats against him by the highest government representatives. The Serbian government will bear responsibility if Božinovski is exposed to inhuman treatment in Macedonian prisons.

In March, the anti-torture committee of the Council of Europe (an international organization for the promotion of democracy and human rights with 47 member states, not to be confused with the 28-nation  European Union) published a report on the conditions within the Macedonian penal system, expressing deep concern due to “numerous consistent allegations of ill-treatment of detainees by custodial staff were received, and there were frequent instances of inter-detainee violence.”

Association of Journalists of Serbia also expressed concern about Božinovski's safety after his extradition to Macedonia.

Anti-government portals in Macedonia accuse the Serbian government of collusion with the Macedonian government. Both countries are currently run by right-wing parties which are members of the European People's Party, a center-right European-wide political party with a presence in the European Union and the Council of Europe. For example, their critics point to an incident in October 2015, when Serbian authorities simply released former Macedonian secret service chief and Gruevski's cousin Sašo Mijalkov after a short detention for smuggling a gun and ammunition on an airplane. The results of an investigation into the case in Macedonia are still pending.