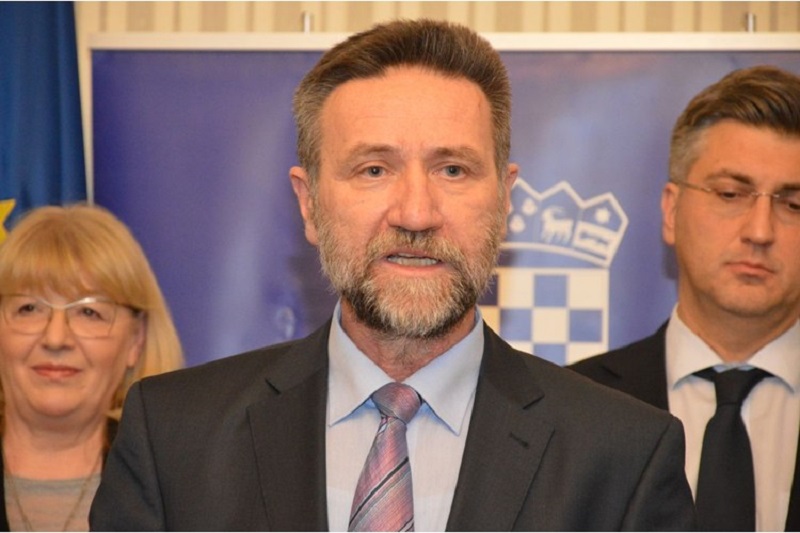 Croatian minister of Science and Education Pavo Barišić (foreground) with Prime Minister Andrej Plenković in the background. Photo from the website of Government of Republic of Croatia which allows reuse with attribution.

Croatian citizens are fed up with public officials with undeserved academic credit, gained thanks to plagiarism.

In January, Croatia’s parliament-appointed Committee for Ethics in Science and Higher Education (CESHE) concluded that the current Minister of Science and Education, Pavo Barišić, copied another scholar's work without attribution in a 2011 academic paper.

Barišić claimed that it's a matter of a footnote mishap which was corrected in translations of the paper published in Spanish and German, as well as the online version of the Croatian paper.

Among many others, internationally renowned molecular biologist Ivan Đikić called upon Croatian Prime Minister Andrej Plenković to replace the minister who “deceived the prime minister and the public by claiming it's just a printing mistake”. Đikić published an extensive analysis, with argumentation that the minister plagiarized a text by Stephen Schlesinger, “unethically appropriated ideas” from several books without quoting the sources, copy-pasted contents from Wikipedia, and that even his corrections were inconsistent and faulty.

In February, fact-checking website Faktograf determined that Barišić made the corrections and apologized to Schlesinger after he was caught in the act of plagiarism, and that his explanations of the whole case were misleading and manipulative.

Online petition “Stop to Plagiarism in Croatia”, initiated by 19 academics from Croatia, including some working in the USA, UK and Australia, has received 11,639 signatures so far.

There is a vast body of evidence that shows that plagiarism is a widespread problem in Croatian academic, educational and public life. Plagiarism and similar kinds of ethically unacceptable behavior have lasting damage on research and educational institutions; further leading to a serious decline in trust.

We would like to express deep concern about this state of affairs and ask the Croatian Government and Parliament to enforce a policy of zero tolerance to plagiarism. In particular we ask for a sanctioning of instances of plagiarism committed by those who hold a public office.

Faktograf quoted constitutional expert Sanja Barić, who noted that the prime minister should not contradict or ignore the decision of the CESHE. However, the tainted Barišić still holds the post of Croatian minister of science and education.

In recent months, official tweets by the Croatian government about science and education have often received comments from citizens who question their credibility.

Parent Tweet: ‘Prime Minister of [the] Republic of Croatia: This is a strong signal of government's support aimed at education and acquiring key STEM skills for the youth.’
Tweet: I have only 3 words for you — plagiarism, Barišić, Đikić.

On May 12, Faktograf published a denial issued by the minister's lawyer, claiming their assessments were inaccurate and that his client is not a plagiarist. Faktograf then fact-checked the claims in the denial, and confirmed they are not based on facts.

At a public event on May 15, the initiators of the online petition reiterated their demands for removal of confirmed plagiarists from the parliament, the constitutional court and the government. Professor Đikić said that widespread plagiarism is like cancer in society — and a form of stealing — which must not be tolerated anywhere.

However, having mentioned the case as an example of unsuccessful attempts to influence him while discussing possible changes in his cabinet after the ongoing local elections, the chances are slim that the prime minister will remove Barišić from the post of science minister.