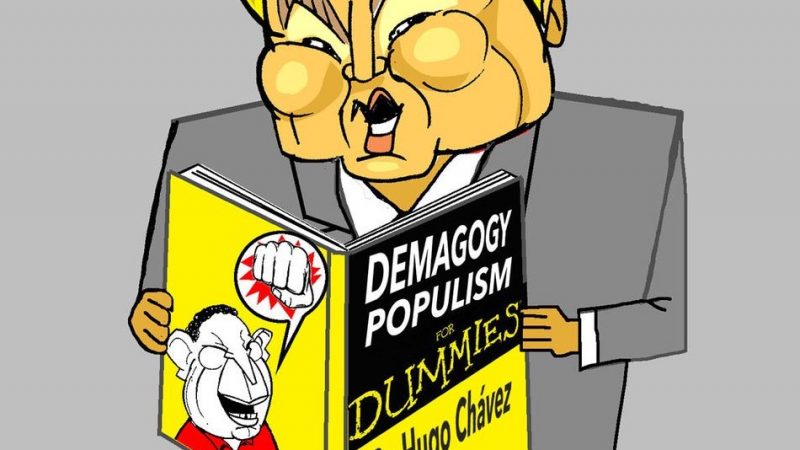 Inflammatory speeches, flamboyant personalities, and an omnipresence in citizen and mainstream media that can't be contained.

These attributes and many more have compelled netizens to compare US presidential candidate Donald Trump and late Venezuelan president Hugo Chávez, and these ideas have only gained traction online as the presidential race has reached its peak:

A lot of the discussion has taken place on Twitter, where new campaigns comparing Trump not only to the late Venezuelan president, but also to other Latin American authoritarian heads of state, circulated online — often as part of efforts to urge Latin American voters to vote for Democratic candidate Hillary Clinton.

On the Latino comedy channel Flama, Venezuelan stand-up comedian Joanna Hausmann expanded on comparisons she made previously on the Internet in 2015:

Listen, when it comes to leaders like this, it does not matter that they’re from the Left or the Right or Center or whatever, political inclinations shouldn’t change scary reality that this these men make the world a worse place […] They would make entertaining TV characters, sure, but they make dangerous leaders.

On Milly Channel's Youtube channel, some of these elements were evident in more detail in Spanish. The vlogger pointed at the ways in which both political leaders have concentrated on stirring the emotions of their followers:

Indeed, a critical tactic for both leaders has been an incendiary and often off-the-cuff media presence.

Both leaders used Twitter to promote a larger-than-life presence on social media, speaking plainly and using crude humor to attract audiences in the millions.

And both have combined this with powerful positions in mainstream television. On Aló Presidente, Venezuela's charismatic socialist leader would pontificate about national politics for hours on end, and regularly mock the missteps of politicians who fell out of his favor. Trump hosted the enormously popular TV program “The Apprentice,” and whether he wins or loses, he appears poised to launch a new cable television network, “Trump TV.” Both men have also threatened lawsuits against journalists who write stories critical of their policies and practices.

Of course, there are significant differences in the kinds of policies and visions for society that the two leaders advocate. Trump endorses a so-called “trickle-down” economic model that he says will support the growth of businesses by giving benefits to entrepreneurs, while Chávez pushed a government built on redistributive tax policies and state practices. Chávez also had years of experience in politics and government before he ran for president.

On the blog “Latin America Goes Global,” Juan Nagel points at the differences between Chavez's and Trump's campaigns, urging his readers not to forget the economic and political crisis that resulted in Venezuela thanks to Chavez's presidency — a collapse he says wouldn't be possible in the United States, even under Donald Trump, because of the strength of the United States’ public institutions:

Chávez was not always an uncivil loudmouth. In 1998, when he first ran for president, he ran a disciplined campaign that drew many disaffected moderate voters to his fold. He also disguised his radicalness, saying that Cuba was a dictatorship and packaging himself as some sort of Tony Blair-Third Way moderate leftist. […] Chávez’s disastrous policies are solely responsible for the destruction of the Venezuelan economy […] That, and not his media persona, is the real Chávez.

I understand that many commentators want to force the parallels out of a genuine fear of what a Trump presidency might mean. However, readers should keep in mind that Trump would have to govern within the U.S.’s much stronger institutions. The checks and balances that keep the American presidency at bay will not likely be undone in a Trump administration.

By portraying Chávez as a caricature populist who rambles, insults, and provokes without merit, foreign observers are doing Venezuela a disservice. Yes, that was part of Chávez’s political persona, but it was not the most important part.

If foreign writers are going to look for a foreign doppelgänger for Trump, they are going to have to look harder. Hugo Chávez was in a league of his own.

The Venezuelan government has been none too pleased by these videos and social media memes.

Foreign Minister Delcy Rodriguez, for instance, expressed her discontent with the following tweet:

Comparing (US) candidate Trump with Commander Chavez is an expression of the racist arrogance and the irrationality of a party that doesn't pay attention to its electors.