To Some Iranians Watching the US Elections, Democracy Really Seems Like a House of Cards 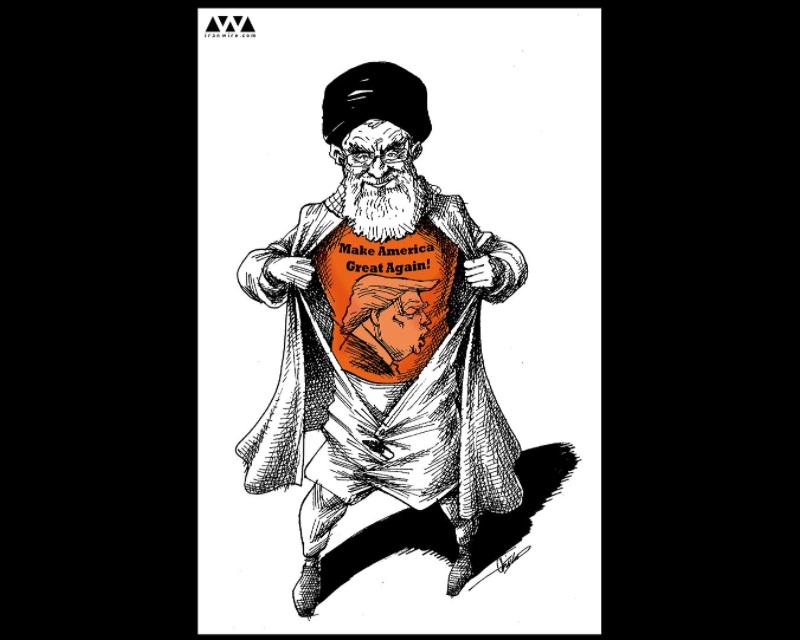 Cartoon by Mana Neyestani for IranWire.

Frank Underwood, the lead character of the popular Netflix TV series “House of Cards“,  has an infamous line: “Democracy is so overrated”. This much-quoted line, especially since the show began airing in Iran, has become a poignant touchstone for Iranians following the US presidential elections this year, reminding them of their own political sphere's struggles for democracy.

Many called the second debate between Donald Trump and Hillary Clinton the ugliest in American history. Scandals and slurs have dominated this election to such an extent that many worry it will become the new norm. For Iranians who lived through two terms of the populist presidency of Mahmood Ahmadinejad (2005-2013), the US elections have evoked a sense of déjà-vu. And having experienced the Green Movement protests against Ahmadinejad's 2009 re-election and the government repression that followed, Iranians can only hope that US democracy is not as “overrated” as Underwood says.

Iran’s Supreme Leader Ayatollah Ali Khamenei recently hinted at his appreciation of Trump’s “straight-talking” ways, a trait that was also attributed to Ahmadinejad. Khamenei had previously expressed concern over a Trump presidency and its implications for the Iran nuclear deal, so his change of heart has sparked controversy among Iranians on social media, who equate the move with Khamenei's support of Ahmadinejad during and in the aftermath of the 2009 elections.

Trump received barely any TV coverage in Iran while he claimed the election was rigged. After Khamanei expressed support for him, however, Trump is the new Ahmadinejad. He is all over national television.

Even before Khamanei expressed his support for Trump, however, the establishment was already enjoying the US spectacle of US politics. The presidential debates were televised live, and the first season of the Netflix show “House of Cards” had gone on air.

As America prepares to vote on Tuesday, it is worthwhile to consider a few themes that both Ahmadinejad and Trump have embraced, and what demagogic discourse could imply for us US democracy.

In the presidential campaign of 2009, Ahmadinejad was running for a second term. His main challenger, Mir Hossein Mousavi, had returned to politics after decades of withdrawal. Mousavi said he was contesting the election in order to combat the pervasive corruption and delusional policies he believed had taken over the country. In response, among other acts, Ahmadinejad appeared on national television bearing thick files that ostensibly included records of widespread corruption by several officials he claimed were supporters of Mousavi.

Fast forward seven years, Trump has repeatedly called even fellow Republican challengers names such as “little Marco” and “ugly Fiorina”, and, of course, “crooked Hillary”, which became a popular hashtag among Trump and his supporters. Even though Ahmadinejad was infamous for his trash-talking, the closest he came to insulting an opponent’s physical characteristics was when he called out the Green Movement protesters “a bunch of dust and trash”.

Ahmadinejad came into the spotlight for his brazen denials of the Holocaust as well as an egregious remark that “Israel should be wiped off the map“. On the nation of Israel's 60th anniversary, Ahmadinejad stated, “Those who think they can revive the stinking corpse of the usurping and fake Israeli regime by throwing a birthday party are seriously mistaken”. In several other inflammatory statements, he repeatedly refused to acknowledge Holocaust, causing him to be branded a Holocaust denier and even the “new Hitler” by western politicians and media.

There's a thin line that will get thinner between Trump's lies and, say, Ahmadinejad's denial of the Holocaust. It's that bad.

A decade and some later, the Republican presidential nominee raised eyebrows with his comments stereotyping Jews and juxtaposing Hillary Clinton’s face with a Star of David and a pile of money. These moves unleashed a firestorm of anti-Semitic slurs and attacks against Jewish journalists who criticized Trump’s campaign—attacks that were not categorically denounced by Trump’s campaign. On the contrary, Trump’s Twitter account repeatedly retweeted white supremacists, contributing to the further dissemination of anti-semitic hatred. Jewish community organizations reacted by releasing a statement denouncing racism and xenophobia. This made little difference, however, and a few months later, Pepe the Frog became a symbol of the white nationalist alt-right and was named by the Anti-Defamation League as an official hate symbol. The public reacted with the hashtag #WeveSeenThisBefore, a reminder that Trump’s rhetoric echoes that of demagogues of the past.

During his two terms, Ahmadinejad repeatedly proposed policies that were perceived as misogynistic. Upon his election, President Ahmadinejad changed the name of the Center for Women's Participation to the Center for Women and Family Affairs. Shortly after, female government employees were ordered to work only during daylight hours. In one his final legacies, Ahmadinejad proposed legislation to reduce working hours for eligible women. These proposals were perceived as underscoring the role of women as housewives and mothers. Besides domestic policies, Ahmadinejad also made a snide remark about the potential presidential nomination of Hillary Clinton in 2008, stating that “the presidency of a woman in a country that boasts of its gunmanship is unlikely.”

Donald Trump is known to have mistreated women for decades, at least since the 1980s. The Republican party has historically been criticized for its position on women's reproductive rights, but Trump’s unapologetic denigration of women has taken the party's record to a whole new level.

And the list goes on. Both Trump and Ahmadinejad have taken controversial positions on immigration, terrorist groups in the Middle East, homosexuality, and even alleged plagiarism by their teams. For their supporters, however, they hold a stunning appeal, by virtue of denouncing a perceived “elite” and corrupt establishment of their countries.

Ahmadinejad’s presidency cost Iran a historic stagflation, entangled foreign relations, billions of dollars in loss as a result of economic sanctions, and a drastic drop on the Corruption Index from 88 in 2005 to 144 in 2013, to name only a few of the administration's effect.

While this is by no means an exhaustive comparison of the contexts, economies or electoral systems of Iran and the US, it is almost certain, however, that the demagoguery that has shadowed the 2016 US presidential campaign could pose serious threats to US democracy, just as it did to Iran’s frail transition to reform and democracy. Backwardness and economic instability should be the least of citizens’ worries. Perhaps these illustrations best depict the possible outcome, which hopefully swing voters have a chance to contemplate before going to the polls tomorrow.