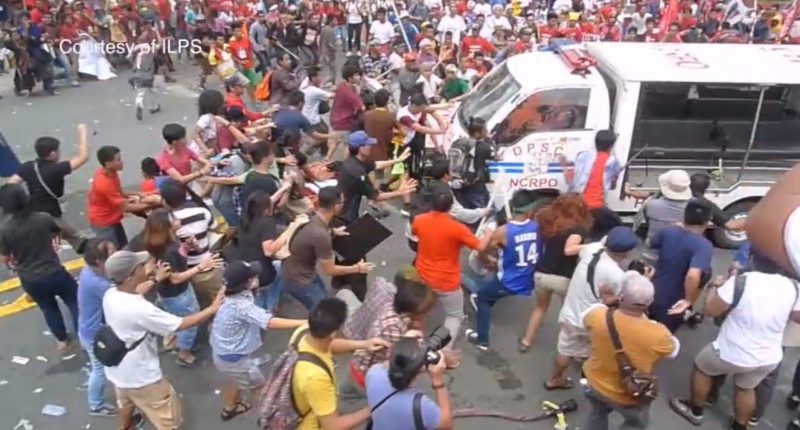 Caught on now viral video footage, a police van repeatedly attempted to ram and run over indigenous peoples and national minority groups gathered in protest on the morning of October 19 in front of the United States Embassy in Manila.

The protest was part of the ongoing Pambansang Lakbayan ng mga Pambansang Minorya (National Caravan of National Minorities) that saw 3,000 indigenous peoples come to the Philippines’ capital to draw attention to human rights abuses and the militarization of their ancestral lands. The national minorities are demanding the pull-out of military troops from their communities and the dismantling of state-sponsored paramilitary groups.

The demonstration was also partly meant to express support for President Rodrigo Roa Duterte moving the Philippines away from its decades-old unequal relationship with the US, which indigenous groups say has led to foreign mining companies and agro-corporations laying waste to their ancestral lands.

But instead of finding sanctuary from violence in the national capital, their peaceful march to the US Embassy was met with brutality as police violently dispersed the protest with tear gas and truncheons just as it was about to end.

A police vehicle driven by Police Officer 3 Franklin Kho then repeatedly drove his police van into the mass of protesters and ran over several indigenous people and activists.

Protesters alleged that the ruthless dispersal was carried out on the orders of Senior Superintendent Marcelino Pedrozo Jr. of the Manila Police District, although Pedrozo has publicly denied ordering the action. Another police spokesman also denied that any police vehicle ran over the protesters.

However, Pedrozo was caught on camera telling his men to disperse the protesters and cause mayhem if necessary, saying it was a shame that protesters made it near the US embassy:

You didn’t even arrest anyone, they are so many there… Let there be mayhem if necessary, we are the police here. Will we allow ourselves to be beaten by those protesters? What face will we show to the embassy? So just disperse them now! You are police why don’t you fight!

Police personnel also brutalized a luckless driver of a jeepney vehicle used by the protesters, leaving him bloodied on the street from the repetitive blows to his head:

An attempt by national minorities to bring their cause to the General Headquarters of the Armed Forces of the Philippines in neighboring Quezon City on October 18 — a day before the Manila protest — was met with water cannons and violent dispersal attempts.

A newly formed alliance of national minorities called Sandugo, which led the Quezon City protest, condemned the police brutality and extreme prejudice against indigenous peoples. They also called on the government to make the police officials accountable for the carnage.

Back in Manila, the violent dispersal left 50 people injured, with at least 10 being treated in nearby hospitals for serious wounds. At least 29 protesters were also arrested, including some of those wounded. They were eventually released after the rally participants staged protests in front of the police headquarters.

Here is a video of indigenous leader and Sandugo spokesperson Piya Macliing Malayao, one of those hit by the police van, from independent video group Tudla Productions:

We were about to end and disperse by ourselves. We were only waiting for the last speaker to finish talking. But the police moved forward and one of their vehicles even drove back and forth. That is the reason for my wounds. And now that I should be given first aid by our colleagues from the medical team… they were forcibly arrested by the police. All of us were to be charged, the police said. What charge? Defending the sovereignty of the Philippines. We are here to protest for a foreign independent policy and end to the domination of US imperialism over the Philippines. The Filipino people have a long experience of being subjected to violence and plunder because of the rule of US imperialism and the neoliberal policies they impose on the country, the US bases and the US troops that are here. This is what we are protesting about when we were violently attacked by the police.

Dulping Ogan, secretary general of the Mindanao-based indigenous alliance Kalumaran, said the brutal dispersal shows the continuing powerful influence of the US in the country with police willing to inflict harm on national minorities to keep protesters away from the embassy:

Here in Manila, our calls are met with water cannons, and now teargas and brute force. In our ancestral communities, the attacks are far worse: we all know of the repeated cases of murders against our kin. Everywhere we turn, we Lumads and other national minorities are brutalized. Yet we will remain defiant.

President Duterte, who is now on an official trip in China as part of his moves to forge a more independent foreign policy, has promised to investigate the incident and make an official pronouncement upon his return on October 21. Nine police officials involved in the bloody dispersal have been dismissed from service.

The mistreatment of disenfranchised populations in the Philippines is, unfortunately, nothing new. Earlier this year, farmers asking for rice in Kidapawan, Mindanao were violently dispersed by police. And the Tumandok indigenous peoples in Panay Island will be displaced with the construction of a mega dam.

Last year, Lumad indigenous peoples from Mindanao also organized a caravan to Manila to speak out against abuses. Video of their journey can be seen below:

This year, the indigenous peoples and national minority groups who are part of the Lakbayan of National Minorities are currently being hosted in the Diliman campus of the University of the Philippines.