Lumad Indigenous Peoples in the Philippines Speak Out Against Abuses 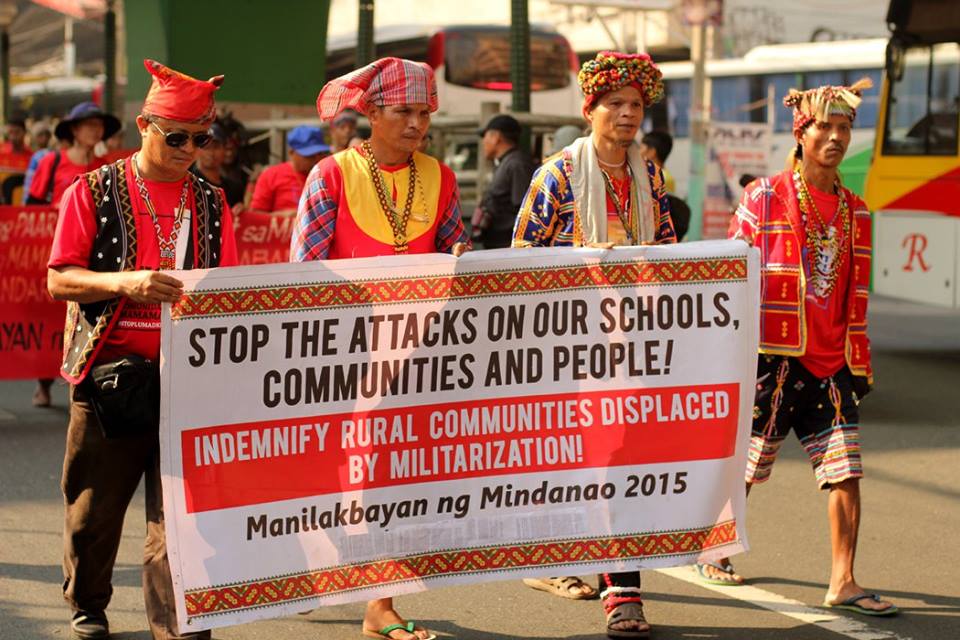 Lumad leaders display banner calling for the protection of their communities as they march towards Manila. Photo from the Facebook page of ST Exposure

Over 700 Lumad (indigenous peoples from the southern Philippine island of Mindanao) traveled thousands of kilometers and set up protest camps in the nation's capital of Manila in October 2015 to demand the removal of troops and paramilitary forces from their communities.

Dubbed the Manilakbayan 2015, the people’s caravan also seeks public support to end the human rights abuses committed by state forces against the Lumad.

Testimonies from some of the Lumad were shared on Facebook by multimedia group Southern Tagalog Exposure.

This was the most high-profile case in what activists claim is a systematic campaign of repression against indigenous peoples in Mindanao, including the targeting of their leaders for assassinations, the closing of indigenous schools, and the military occupation of their homelands.

Lumad organizations explain that they are being targeted at the behest of large-scale mining, plantations, and other companies salivating over the resource-rich Lumad lands.

The armed forces of the Philippines is also accused of arming and training Lumad paramilitaries to fight their own kin. The militarization of indigenous communities has led to massive evacuations of thousands of Lumad across Mindanao.

These brief statements gathered by Southern Tagalog Exposure bear witness to the intense militarization of indigenous communities and plunder of their ancestral lands. 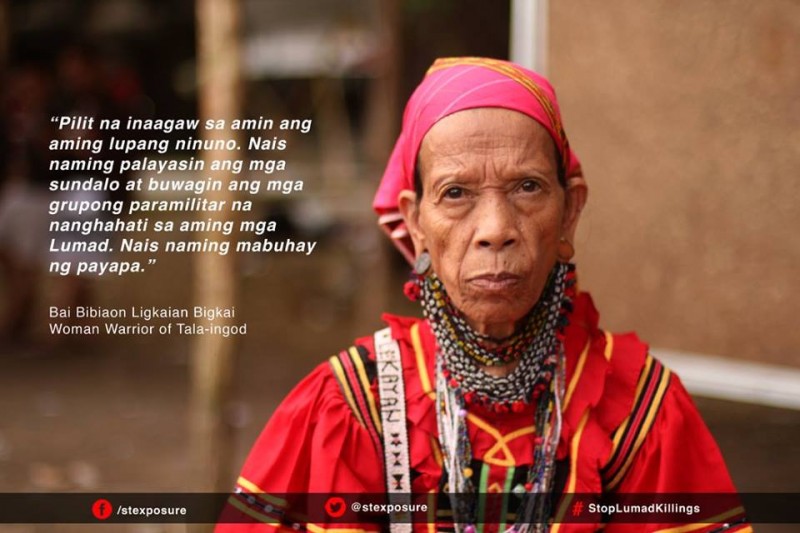 “Our ancestral lands are being forcibly taken from us. We want to drive the soldiers away and dismantle the paramilitary groups dividing the ranks of us Lumad. We want to live in peace.”
Bai Bibiaon Ligkaian Bigkal, Woman Warrior of Tala-ingod, Davao del Norte 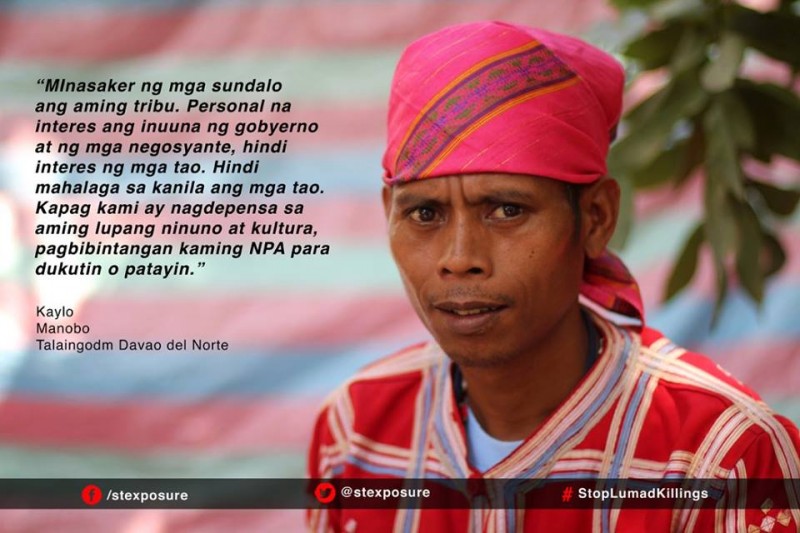 “Soldiers massacred our tribe. The government and corporations prioritize personal interests, not the interests of the people. The people are not important to them. When we defend our ancestral land and culture, they accuse us of being part of [rebel group] New People's Army to justify abductions or murders.”
Kaylo, Manobo of Talaingod, Davao del Norte 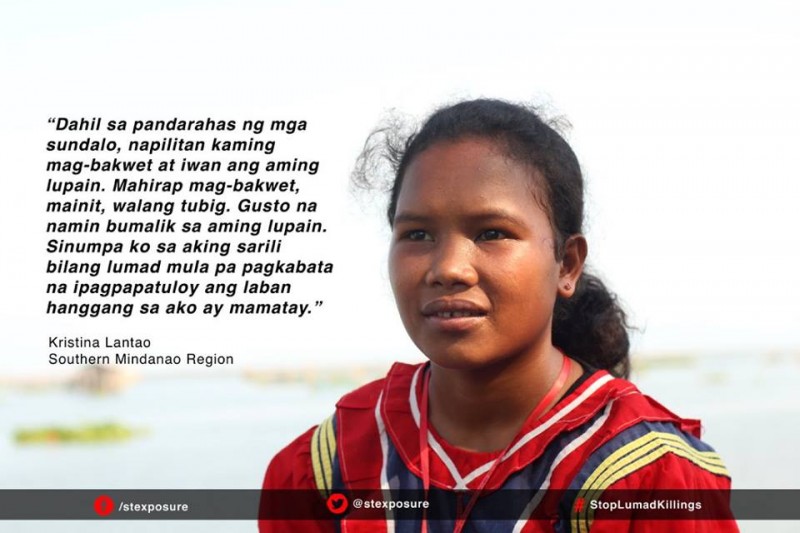 “Because of the repression of the soldiers, we were forced to evacuate and leave our land. To be displaced is difficult, with the heat and no water. We want to return to our land. I vowed to myself as a Lumad since childhood to continue our fight until I die.”
Krstina Lantao, Southern Mindanao Region 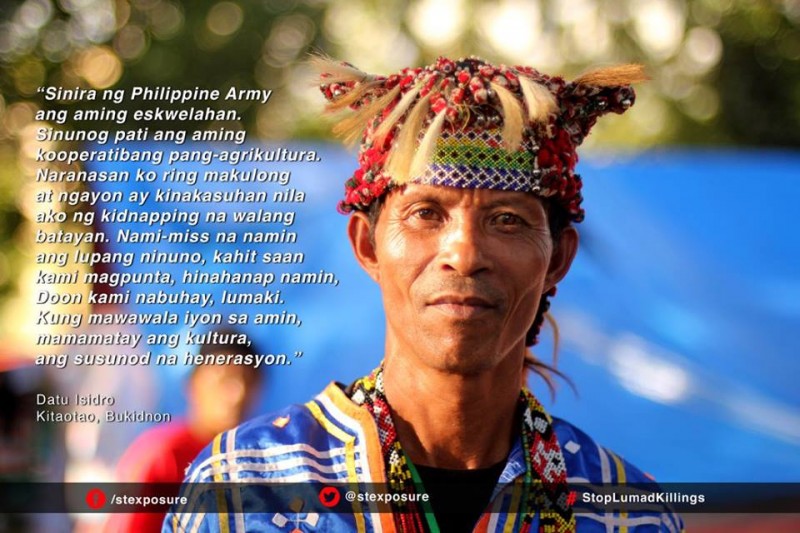 “The Philippine Army destroyed our school. They even burned our agricultural cooperative. I experienced getting jailed and now face trumped-up charges of kidnapping. We miss our ancestral land. Wherever we go, we yearn for it. This is where we live and grew up. If it is taken from us, our culture will die with the next generation.”
Datu Isidro, Kitaotao, Bukidnon 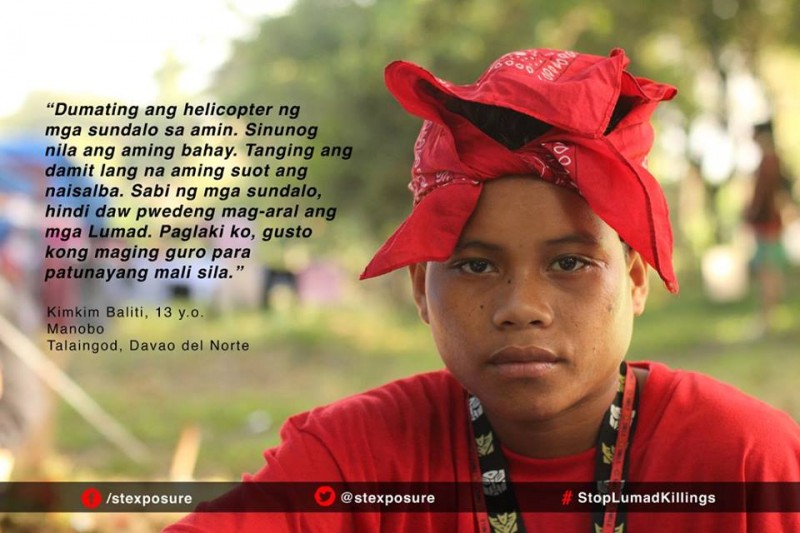 “The helicopter of the soldiers arrived at our place. They burned our house. Only the clothes we wore were saved. According to the soldiers, the Lumad are not allowed to study. When I grow up, I want to be a teacher to prove them wrong.”
Kimkim Baliti, 13-year-old Manobo, Talaingod, Davao del Norte 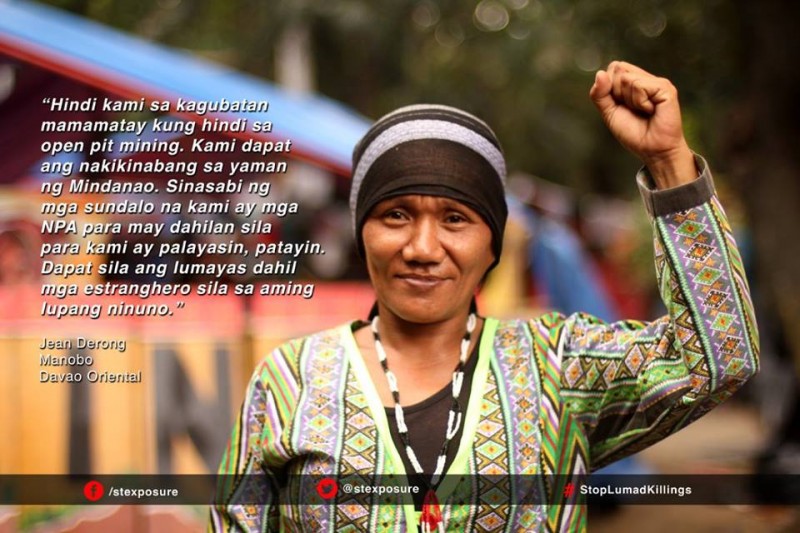 “”We will not die in the jungles, but instead will die from the open pit mining. We should be the ones benefiting from the wealth of Mindanao. The soldiers say we are [rebel group] New People's Army to justify our displacement and murder. They should be the ones who must go because they are outsiders to our ancestral land.”
Jean Derong, Manobo, Davao Oriental 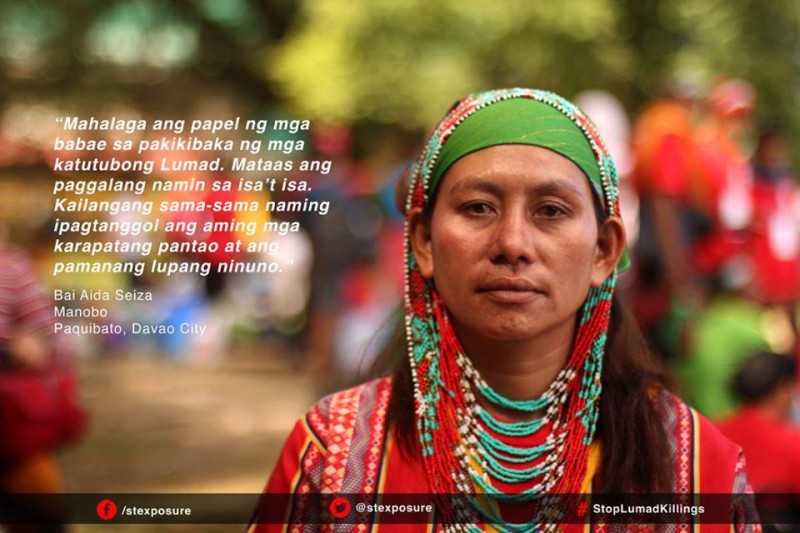 “The role of women in the struggle of the native Lumad is important. Our respect for each other is high. We need to collectively defend our human rights and our ancestral land.”
Bai Aida Seiza, Manobo, Paquibato, Davao City