Vladimir Putin and the Fake Brides of Red Square 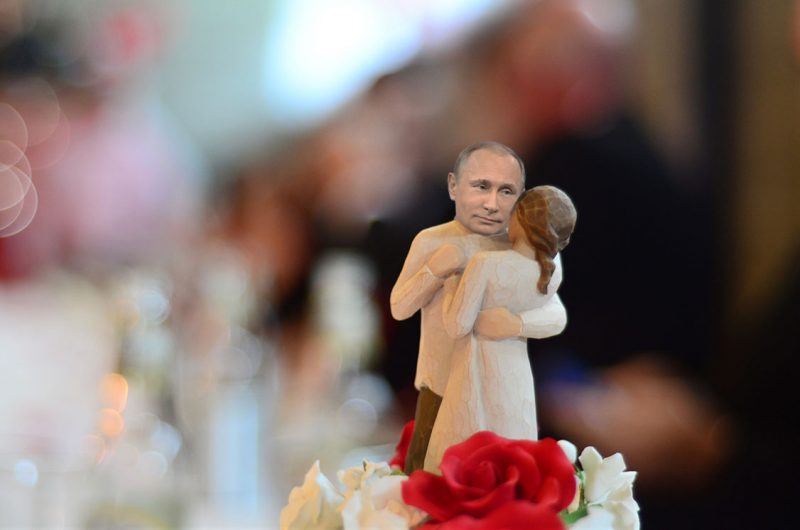 Last weekend, Moscow spent more than half a billion rubles (almost $9 million) on a festival for the city's 869th birthday. There were massive fireworks, a parade of heavy municipal equipment (featuring more street-cleaning vehicles than you ever wanted to see), and a thousand other pieces of eye candy laid out by officials. President Vladimir Putin, who attended the main event at Red Square on Saturday, September 10, was both an observer and a part of the show.

Moscow's longevity, however, wasn't the only thing being celebrated: at least part of the spectacle appears to have been arranged to remind Russians that their president is a virile, red-blooded man.

On Saturday, Kremlin press pool journalist Dmitry Smirnov tweeted a short video showing Putin walking through Red Square, passing a large group of women dressed in white as brides. Putin shouts “congratulations!” at the group, and then stops to pose for selfies with the women. “You're all beauties!” he tells them. “When Putin walks by, forget the grooms,” Smirnov wrote above the video.

But there were no grooms, it turns out. Internet users later identified one of the women on Instagram and soon discovered that the “brides” who surrounded the president were in costume.

Evgeniya Konovalova, a woman in the group who secured one of the spots at Putin's side, published several photographs from Red Square last weekend, where she was dressed in a white bridal gown. She also posted one of her selfies with the president. “My wedding with Vladimir Vladimirovich,” she joked in a comment under the photo. Under another picture, Konovalova revealed that she was working at Red Square in costume as part of the holiday festivities.

Lyudmila Vasilyanskaya was also in the “bridal group.” Her videos on Instagram suggest that she and Konovalova were part of a large dance performance for the holiday.

After the celebrations in Moscow, Putin and Prime Minister Dmitry Medvedev traveled to Novgorod, meeting with local fishermen, whom they promised new federal subsidies. This encounter, too, prompted speculation online that the president had met with actors, after photographs revealed that one of the supposed fishermen appeared to be wearing a wristwatch too expensive for an ordinary angler.

The dual PR stunts have naturally fueled a lot of joking online, with Putin's critics asking if the president himself is even real:

Less endearingly, Konovalova's ample bust has inspired some people to conclude that she isn't a model, but a prostitute. Leonid Volkov, a leading figure in the beleaguered democratic opposition, and a vocal critic of Vladimir Putin, was one of these people:

Everyone is so surprised about the photograph of Putin with the prostitutes, as if 99 percent of the photographs with him aren't the same thing.