A Viral Hit-and-Run CCTV Video Begs the Question: ‘Is Humanity Dead in Delhi'? 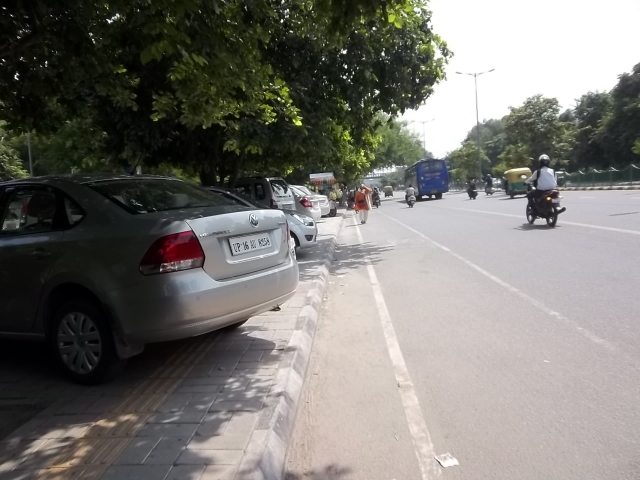 Where should we walk? With cars parked on pavements, people are forced to walk on roads. Image from Flickr by Veeresh Malik. New Delhi, India September 13, 2014. CC BY-NC-ND 2.0

A CCTV video of a man lying in pool of blood for over an hour on a busy road near New Delhi's Subhas Nagar metro station has gone viral.

On Wednesday, August 10 at around 5:30 am, 40-year-old Matibool was hit on the side of a road by a three-wheeler milk delivery vehicle on his way home from an overnight shift.

The driver of the vehicle, speeding along the deserted road, rammed Matibool from behind. The victim hit a pole before collapsing.

CCTV footage uploaded to YouTube by Naresh VeeraSwarapu shows the driver approaching Matibool, the man he hit, before fleeing the scene after realising he was seriously injured and bleeding.

He lay there for more than than an hour as 140 cars, 82 three-wheelers, 181 bikers and 45 pedestrians passed the dying man without helping.

The camera also picked up the only man who stopped.

Shockingly, he did so in order to pick up the victim's mobile phone and walk off with it.

#Delhi, India.Over 200 people callously walked past hit & run victim,Matibool. One give him a kick & stole his phone https://t.co/aiEIeh8jDR

Eventually help came but by the time policemen took him to a hospital nearby, Matibool had died due to excessive bleeding.

There were multiple hospitals along the road where Matibool died waiting for more than a hour to be rescued.

The victim drove an electric rickshaw by day and worked as a watchman at night.

Who killed Matibool? The driver who hit him OR all those who saw him dying but chose to ignore and walk away? 8am #DilliMeriJaan @927BIGFM

I completely believe #humanityisdead in #Delhi #matibool case has left me ashamed of capital, it's people and its #hypocrisy #delhisucks

In the rat race of Paisa Paisa paisa (money money money) we have lost the Humanity …..human touch

Anupam Raj made a sarcastic remark on the same platform:

Oh c'mon now! We are candle March specialist! Helping people is not our cup of tea!!

Who steals the phone of a dying man? the devil himself.

Pronit Roy Chowdhury noted that this is not only Delhi's problem:

Shame on this country and this video is so wrong to single out Delhi, this happens in so many places and goes undocumented. RIP Matibool :-(

The police have detained the milk delivery man with the help of the video footage but are still searching for the person that stole Matibool's cellphone.

The incident also raises questions about the state of footpaths in Delhi.

Matibool would have not been hit by the three-wheeler if he was walking on the pavement. Pavements in Dehli, however, are typically nullified by parked cars and a build up of construction materials.

Indian Facebookers noted that fear of the police and the Indian legal system might have been additional reasons for people ignoring Matibool's plight. Their suggestion is that onlookers and passersby avoided reporting what they saw out of concern that they might be pinned with the crime.

Since Matibool’s death, the Delhi government has announced plans for an “incentive scheme”, under which people, including drivers of taxis and autorickshaws, will be rewarded for taking victims to hospital.

The police also said that good Samaritans won't be harassed or forced to disclose their identity.