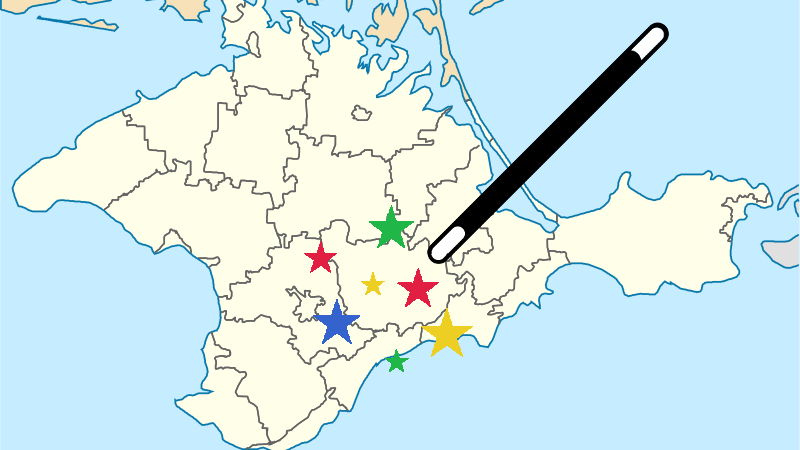 As if by magic, Google Maps changed some town names in Crimea overnight. Images edited by Tetyana Lokot.

On July 27 Internet giant Google renamed a number of towns, villages, and settlements in Crimea—a peninsula in Ukraine that has been under Russian control since early 2014—on their Google Maps service. The change came after the Ukrainian parliament altered the names of 70 geographic locations in Crimea in accordance with its “decommunization” campaign in May 2016.

Users of the Russian and Ukrainian versions of Google Maps noticed the differences immediately. For instance, according to a report by Meduza news website, the town of Krasnoperekopsk became “Yany Kapu,” Sovetskoe turned into “Ichki,” and Kirovskoe was changed to “Islyam-Terek.” Many of the new names have Crimean Tatar origin or other historic roots, replacing the Soviet-era variants.

The change on Google Maps immediately provoked a backlash from Russian and Crimean officials. The head of annexed Crimea Sergey Aksyonov accused Google in a Facebook post of “producing a propagandistic product” and of “trying to create their own reality.” Russian communications minister Nikolay Nikiforov also joined in the criticism, saying that if Google didn't stick to Russian laws and the Russian names of towns and villages (in Crimea), it would “prevent the company from doing effective business in Russia.”

Ukrainian foreign minister Pavlo Klimkin reacted to the backlash on Twitter, referring to what Ukraine believes to be illegal occupation of Crimea by Russia:

Renaming the stolen is a house of cards: it is bound to collapse under the weight of truth. #CrimeaIsUkraine

On July 28, a spokesperson for Google told RBC news website that they were aware of the changes made in accordance with Ukraine's “decommunization” law and of Russia's displeasure. Google told RBC they were “actively working to restore the previous version of the names on the Russian version of Google Maps.”

The Ukrainian government lost control of the Crimean peninsula in the spring of 2014, following a disputed referendum on seceding from Ukraine and joining the Russian Federation. Most of the world does not recognize Russia's subsequent annexation of the territory of Crimea.