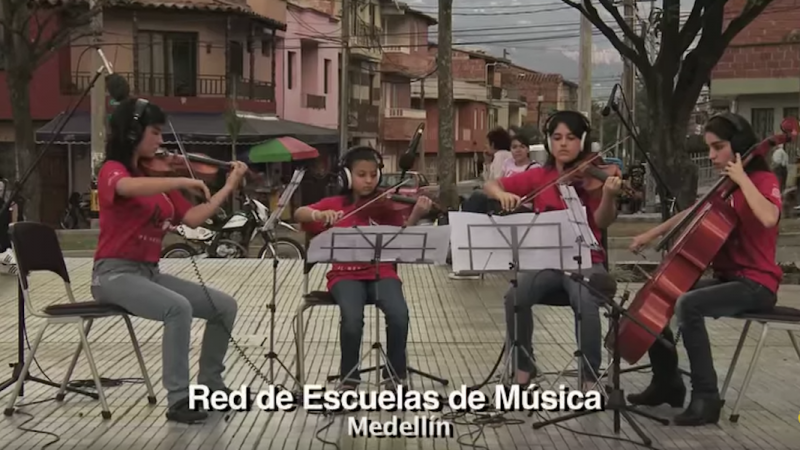 Four members of the School Music Network (Red de Escuelas de Música) based in Medellín, Colombia, are taking part in ‘The Land of Forgetfulness’ (La tierra del olvido) in one of the boroughs of Medellín. The video from which this screenshot is taken can be found on Playing for a Change's YouTube account.

Playing For Change‘s objective is to unite people through music. It is a cultural project that connects musicians all around the world by using emblematic songs.

According to its creator, filmmaker and producer Mark Johnson, the idea occurred to him in New York:

About 10 years ago I had an experience in NYC that opened my eyes to the power of music. I was on my way to work at a recording studio in NYC and I was in the subway station when I witnessed two monks painted all in white wearing robes. One of the monks was playing a nylon acoustic guitar while the other monk was singing in a language I didn’t understand. I witnessed a subway platform full of people and no one got on the train: everyone was listening to this amazing music.  Some people where smiling while others where crying but everyone was deeply connected to the music. I got on the train and headed to work and I thought to myself the greatest music I had ever heard was on the way to the studio and not in the studio. I realized great music and art are just moments in time and they exist everywhere. We can use the energy from these moments to connect people.

His effort to bring people from different cultures, ethnicities, religions and political backgrounds together through music began to take shape in March 2005 with what is considered one of the best songs of the 20th century — ‘Stand By Me’ by Ben E. King. American singer Roger Ridley sang it in the streets of Santa Monica in California, and afterwards, Mark added other voices and sounds recorded in Barcelona, Ireland, South Africa, India, Nepal and the Middle East. At the time of writing, the video had more than 90 million views online.

Two years later in 2007, he created the foundation of the same name:

Our mission is to create positive change through music and arts education. As one of our students in Nepal stated, “Music is an indispensable part of life – you cannot live without music.” We couldn’t agree more. At the Playing For Change Foundation, we live our lives by this principle and apply it to everything we do.

The organisation's inclusive message has reached a wide range of countries. In 2010, Mark went to Colombia to record Carlos Vives’ song ‘La tierra del olvido’ (The Land of Forgetfulness) with backing from the Americas Business Council, which was created in 2008 to encourage cultural development in the Americas.

According to Playing for Change:

This video features over 75 musicians across the country of Colombia. Throughout our journey we have learned that music is the greatest tool for healing broken countries, cultures and hearts. With this video we set out to unite and inspire the people of Colombia so they can move forward from years of conflict and create a positive future.

Their success led them to try again in other countries, and in 2012 they went to Mexico to record ‘México lindo y querido’ (Beautiful and Beloved Mexico). They aimed to support Cauce ciudadano (Citizen Channel), a civil society organisation that works with youth to combat the country's violence.

It's an honour to get involved in the preservation of these native forests. We believe that music has the power to get people behind this worthy cause.

Playing For Change is still creating connections in Latin America today. In 2015 they returned to Colombia to support the orphanage Betsalem in their project to create a music school, which they are then hoping to replicate in other parts of the country. On 24 September 2016, they will celebrate Playing for Change Day, which will unite musicians and music lovers alike through 46 events taking place in 21 countries in support of the different projects that the organisation is involved in.

On the organisation's YouTube account, there are many more versions of their songs from all over the globe, as well as testimonies from their participants.