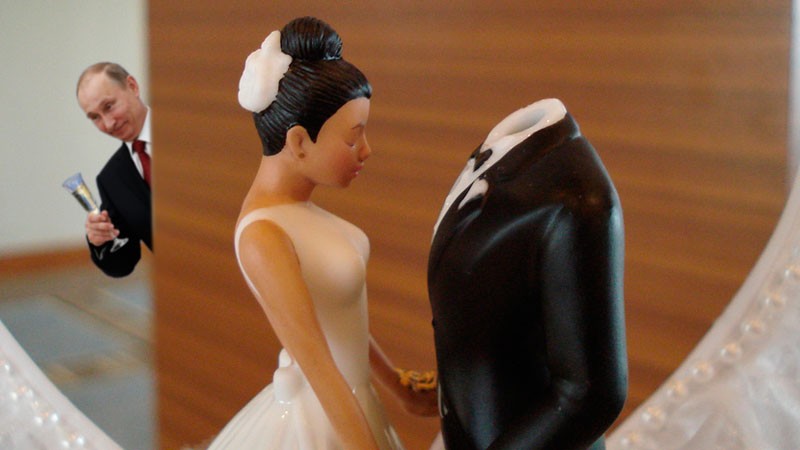 According to a Russian news site and a whole lot of bloggers (including anti-corruption activists associated with the celebrated RuNet sleuth Alexey Navalny), Vladimir Putin’s ex-wife, Lyudmila, has remarried. The lucky fella is said to be 37-year-old Artur Ocheretnyi, two decades Lyudmila's junior and more than a quarter century younger than Putin. Ocheretnyi manages a publishing house and serves as the head of an organization called the Center for Development of Interpersonal Communications.

Not only do bloggers say they have the property records to suggest that Lyudmila remarried (taking Ocheretnyi’s surname), but many also believe they’ve discovered her Facebook account, along with her new husband’s.

I think this is just too subtle to be a fake.

Lyudmila's account has 168 friends (all of whom are publicly visible), including Ocheretnyi. Among her Facebook friends, there are no noteworthy national figures. It is not possible to “add” her account, either through a “friend request” or a subscription. (Those features have been disabled.) Ocheretnyi’s alleged account shares several common friends.

There are various telltale signs of authenticity. Lyudmila’s account wasn’t created recently. Its first photo was uploaded four years ago in 2012. For years, the account has offered a steady supply of everything most Facebook users have come to expect from an older relative: cat videos, inspirational quotes and prayers, trivia quizzes, and listicles. In October 2015, Lyudmila expressed pleasant shock when one of her profile photos received a whopping 47 likes. “I can’t understand how I’ve suddenly flown to the top and earned so much positive feedback. It’s even uncomfortable somehow,” she wrote at the time.

In late May 2015, Lyudmila wrote to praise a book titled “Alphabet of Feelings,” published by Ocheretnyi’s group, the Center for Development of Interpersonal Communications. (The book—which is about child psychology—originally came out in 2009, but Ocheretnyi’s publishing house re-released it last year in a new edition.) The Facebook account believed to belong to Ocheretnyi wrote two comments on this post, promising “there are more wonderful projects to come.”

Whoever controls the Facebook account, “Lyudmila Putina” doesn’t show any great interest in politics. One of the only recent posts containing any political subtext is a YouTube upload on November 21, 2015, when the account shared a video showing Russian soldiers inscribing on bombs bound for targets in Syria the words “For our boys and for Paris!”

Admittedly, some Russian conservatives might take issue with another link she shared on November 7, 2015: “Ten of Stephen Fry’s Ideas About Love, Depression, and the Meaning of Life.” (Fry is an active supporter of LGBT rights and has in the past been a vocal critic of Russian legislation outlawing so-called gay propaganda.)

If journalists in Moscow decide to ask the Kremlin about Lyudmila Putina’s alleged remarriage, an answer—let alone confirmation—isn’t likely. Vladimir Putin has closely guarded his family’s privacy since the first days of his presidency. In January 2015, the news agency Reuters claimed to have uncovered proof that real-estate developer Katerina Tikhonova is Putin’s youngest daughter. At a press conference 11 months later, Putin stated emphatically, “I have never discussed my family and I am not going to do it now.”