No Arrests One Year After Acid Attacks Against Iranian Women 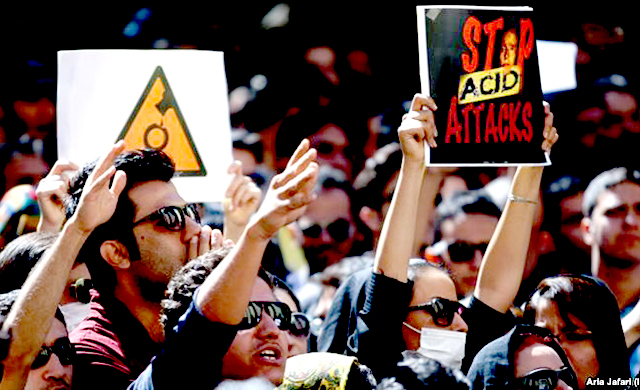 Image from ICHRI and use with permission.

A year after a spate of acid attacks on women in Isfahan, Iran, the police and security forces have not apprehended a single individual, despite their frequent pledges to arrest the culprits.

The mother of one of the victims told the International Campaign for Human Rights in Iran that the authorities have not publicly released any information about the results of their investigations, and have warned families not to give interviews to foreign media.

“Whenever we try to follow up on our daughter’s case, they say they are working on it but so far they have not given any information. The first few weeks they were very active on the case, but now they have slowed down a lot. It seems like they have forgotten about it. We ran around a lot to this and that ministry to be compensated for our daughter’s medical expenses. Now our most important wish is that the perpetrators be punished for the acid attacks,” the mother of one of the burned women said.

The most recent official comment on the attacks came on September 29, 2015, from Isfahan Province Police Chief Abdolreza Aghakhani, who made yet another pledge that the case would be resolved.

“The acid attacks are the most important police case in Isfahan Province. It is the only case we have weekly meetings for and we have an experienced detective doing the investigations. In addition, the security forces, including the Revolutionary Guards and the Intelligence Ministry, are also looking into this case and I’m confident it will be resolved,” Aghakhani said, as quoted by the official Iranian Student News Agency (ISNA).

According to various official figures between seven and ten women were victims of the acid attacks, which began in the city of Isfahan in October 2014. Yet despite many promises by the authorities and a Presidential Order from Hassan Rouhani to three ministries to investigate the case and arrest the attackers, no one has been apprehended.

Eyewitnesses to the attacks have said that the male acid throwers shouted statements against the targeted women’s allegedly loose clothing before attacking their victims.

The linkage between the acid attacks and the issue of proper hijab, or female attire, is strong. Hardliners in Iran, including parliamentarians and high-level clerics, have increasingly focused on imposing ultraconservative notions of hijab on all Iranian women, seeing the issue as a litmus test of allegiance to the Islamic Republic.

A bill, the Plan to Promote Virtue and Prevent Vice, was introduced into the Iranian Parliament in June 2014, and subsequently passed on April 22, 2015.

The plan explicitly mandates the Basij, a voluntary militia that is under the auspices of Iran’s Revolutionary Guards, to enforce proper hijab on all Iranian women. Through its call for Basij enforcement, it entrusts law enforcement to untrained (and unaccountable) individual citizens—in other words, it effectively creates a system of vigilante justice.
.
Additionally, a number of high-level clerics have publicly stated that effective enforcement of proper hijab must go beyond verbal warnings. Just prior to the attacks, Isfahan’s Friday Imam, Mohammad Taghi Rahbar, made a sermon suggesting women with “bad hijab” should be confronted by more than just words.

Eyewitness accounts to the acid attacks strongly suggest the acid throwers were morality vigilantes. The attacks took place as Iran’s Parliament was debating the Plan to Promote Virtue and Prevent Vice.

Defending the bill, Iran’s Chief Justice Sadegh Amoli Larijani said on October 26, 2014, “Naturally Westerners and anti-revolutionaries want to blame the acid attacks on the Promotion of Virtue and Prevention of Vice. I’m sorry for some in the domestic media who are doing the same.”

Prosecutor General Ebrahim Raisi also denied any connection between the Plan to Promote Virtue bill and the acid throwers. “The good religious Hezbollah forces would never commit such a thing,” he said on October 23, 2014.